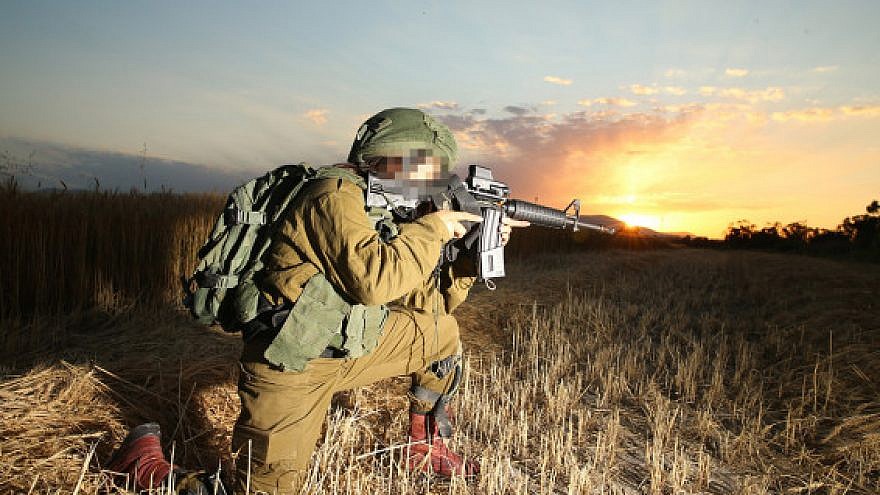 N has to remove her uniform and leave her army-issue weapon at the base when she goes home on leave. (Photo: Miri Tzachi)

(Israel Hayom/JNS) — When Cpl. N., who serves in a mixed-gender infantry battalion, heads out on arrest operations in nearby Palestinian villages, she usually talks to the locals in Arabic.

N. is a 19-year-old pepper pot. She’s opinionated and knows what she wants. She is an observant Muslim who prays five times a day, and during the Ramadan fast mostly takes night shifts. She is an infantry soldier in the Lions of the Jordan Valley Battalion, which operates in Judea and Samaria and clashes with area Palestinians on a daily basis.

“I don’t stop to think that these people are Arabs like me,” she says in fluent Hebrew. “I always tell myself that they brought this situation — in which they are facing Israeli soldiers — on themselves, and I perform my mission as I need to. It doesn’t matter where I come from and who I pray to every day, or what I wear when I go home on leave. When I’m on a mission I need to carry it out, in order to protect my friends, my country. That’s why I enlisted,” she says.

Before she heads out on leave to her home village in northern Israel, she dons civilian clothes and affixes her hijab, the traditional headscarf that covers her hair and neck. She cannot return home for the weekend in uniform or carrying her military-issue weapon.

“There are some people in the village who realized that I’m in the army and started to threaten my family with violence,” N. says sadly.

“They tried to physically attack my family, and that’s scary. Even though my parents support me, every time someone threatens them they take a step back. I was raised to love people, no matter what their religion or beliefs.

“In our home, they always said that Arabs and Jews here are living on the same land. But when there were terrorist attacks, and Jews were being killed, the neighbors said they deserved to die and I didn’t understand how they could say such things. I saw how difficult the situation in the country was and I decided I wanted to change it,” she says.

Not everyone is pleased at the idea of a devout Muslim woman serving in an Israeli infantry unit. She says that the debate about haredi conscription pales in comparison to what she has experienced.

N. has already served under one commander who accidentally separated her from her comrades during a training course because she was wearing her hijab. That same commander apologized after the incident, but N. says even the apology did not make up for the offense.

She says she has also been threatened by male Arab soldiers, who said they would harm her if she didn’t leave the army. They were removed from her unit. But she says she has also received much support from the others in her unit, as well as from battalion commander Capt. Roni Avital and company commander Lt. Gal Yosef.

The corporal has plenty to say about people who look at her askance.

“We need to take a look at ourselves, because we live here, and if we want our rights, we need to do something, and one thing to do is go all the way and contribute to the army. If we don’t fight together, Arabs and Jews, we won’t have a country,” she says.