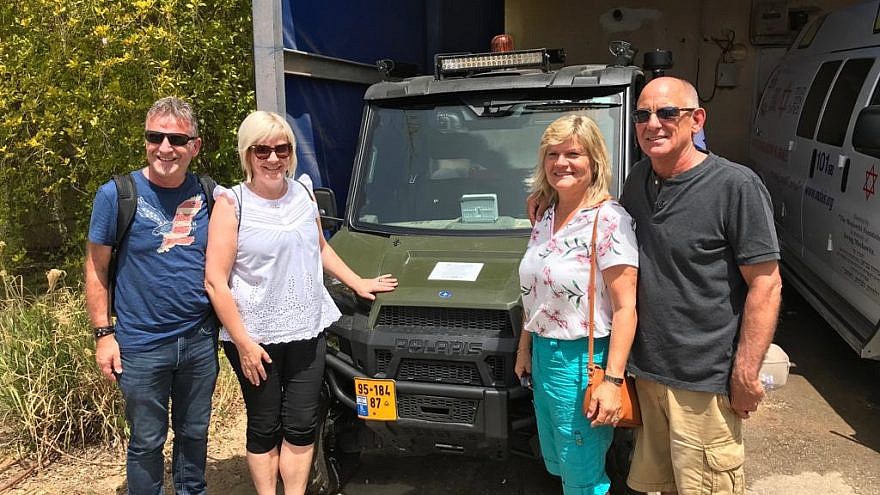 An ICEJ delegation visited Israeli communities along the Gaza border and viewed a new specially designed ATV security vehicle donated through the ICEJ to a local moshav. Photo courtesy ICEJ.

(JNS.org) — After Israel absorbed as many as 700 rockets fired from the Gaza Strip over the weekend, the International Christian Embassy Jerusalem sent a delegation to the western Negev region on May 6 to assess the updated security needs of local Israeli communities and how best to help them prepare for any future escalations.

The Christian Embassy has already donated more than 75 portable bomb shelters to the Gaza periphery towns and villages. On May 6, the ICEJ ordered another three more bomb shelters for the region.

The ICEJ also is donating 20 protective vests for Yatar volunteers from the Negev who risk their lives working alongside the regular security forces to keep civilians safe during times of tension.

“Hopefully, the ceasefire reached last night will hold, but the terror militias in Gaza are notoriously unpredictable and untrustworthy,” said ICEJ president Jürgen Bühler. “However, our team’s visit today has confirmed once more that our humanitarian investment in these vulnerable Israeli communities is comforting families and saving lives.”

Elan Isaacson, chief security officer for the Eshkol Region, told the ICEJ team that “after 18 years of experience and all the bomb shelters groups like you have placed around the region, the number of people killed and injured from the Gaza rockets is substantially down.”

Tamir Idan, mayor of the Sedot Negev Regional Council, also hosted the ICEJ team in Kibbutz Alumim before heading off to a meeting with Israeli Prime Minister Benjamin Netanyahu about the latest escalation of rocket fire from Gaza.

A ceasefire was agreed upon early on the morning of May 6. Israel reportedly responded throughout the barrage by striking Hamas observation posts, warehouses and weapons’ facilities in Gaza.

Reports from Gaza indicate that 23 Gazans were killed and 60 wounded in the Israeli airstrikes.