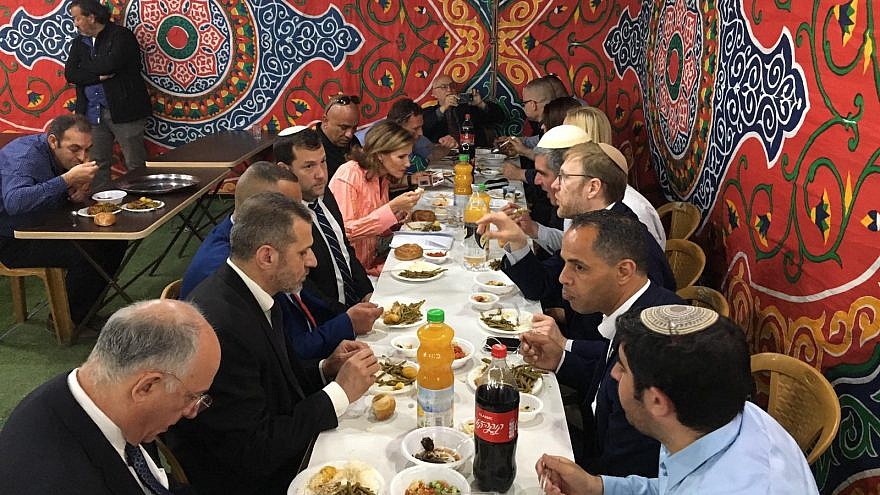 (JNS) — In the context of the Trump administration’s plan to roll out a Middle East peace proposal after the end of Ramadan on June 4, businessman and aspiring politician Sheikh Ashraf Al Jabari has sent a clear message: Palestinian and Israeli business leaders are ready to cooperate towards a shared economic future.

As is traditional after dusk on Ramadan, a group gathered at the Iftar table, breaking the fast over a festive meal. However, the people gathered around the table on May 13 were anything but traditional for a Palestinian Iftar meal.

Jabari, who is from a prominent Hebron clan, opened his home in the contentious West Bank city to Jewish and Arab Israeli business leaders, as well as Palestinians, for a kosher Iftar feast catered from the nearby settlement Kiryat Arba.

The meal raised eyebrows among Palestinians, who criticized Jabari for hosting and working with settlers. The event was organized and sponsored by the Judea and Samaria Chamber of Commerce and Industry, a joint Israeli-Palestinian group co-founded by Jabari that aims to strengthen economic cooperation between Palestinians and Jews in the West Bank.

“It is a great honor to host all of you in my house,” Jabari began. “This meal is a reinforcement of the growing and continuing trend in which the economic-business connection and the strengthening of relations and friendship are leading us all to a more positive place. Breaking the fast together, at a joint meal in the city of Hebron, clearly symbolizes our ability to bridge all gaps.”

His main goal, apart from cooperation and coexistence, is to secure “a better economic situation and reliable income” for the Palestinian population that he views as “living in a miserable situation.”

He explained at a press conference in Jerusalem on the morning after the Iftar meal that “after the Second Intifada, 90 percent of Palestinian institutions were destroyed.”

Furthermore, after the Arab Spring in 2011, he said, “we could hear the rise in Palestinian voices concerned about bad economic perspectives.”

Working to address the new Palestinian economic reality and concerns, Jabari explained, “Our aim is to empower the shared economy between Israelis and Palestinians, working closely together to empower and strengthen the economy.”

He told JNS, “We started with economic developmental projects to employ thousands of unemployed Palestinians and have already managed to allow 1,500 Palestinian workers to work in Israel.”

Similarly, noted Avi Zimmerman, co-founder of the Judea Samaria Chamber of Commerce and Industry, at the Iftar meal, “We are working out of a vision to bring about mutual productivity and equal partnership in all economic-business aspects between Israelis and Palestinians in Judea and Samaria. We are currently engaged in building infrastructures that will enable broad and comprehensive processes at the regional, political and international levels.”

In the context of anti-normalization efforts among Palestinian leadership, Jabari claims that the majority of the Palestinian population is open to hearing more about his platform. According to Jabari, “70 percent of Palestinians are waiting to see the results of our initiative.”

‘The kind of peace that is enduring’

These unique efforts have also sparked the interest of American leaders. Last February, Jabari participated in an Israeli-Palestinian economic conference in Jerusalem, where U.S. Ambassador to Israel David Friedman was the key speaker. “He came to support our initiative, encouraging Israeli and Palestinians to make joint projects. He is a strong believer in supporting of joint projects and coexistence between our two nations,” said Jabari.

In his speech, Friedman maintained that “pieces of paper do not make peace. Relationships make peace. Investments make peace. That is the kind of peace that is enduring.”

He described Jabari as a “man of courage and vision who is practical but committed to peace and to coexistence.”

The U.S. administration, Friedman said, “couldn’t ask for a better partner in this effort.” He told Jabari, “I’m proud to call you my friend.”

Those at the Iftar expressed similar sentiments. “It was very nice of Ashraf to open up his home to the Jews and Arabs who came,” David HaIvri, a councilman on the Samaria Regional Council, told JNS.

HaIvri commended the bravery of Jabari and his other Arab partners “who put themselves at risk by breaking the taboo sitting at the table with their Jewish neighbors and discussing issues.”

“I also think it’s important to note that this initiative is from the ground up without foreign intervention,” continued HaIvri. “These are Jewish people and Arab people who live together in Samaria and have joined forces on common grounds for the future of our children. We are doing this on our own accord, and that is one of the most important points of this initiative,” he said, calling it “a groundbreaking move that has amazing potential.”

Heather Johnston, executive director of the Alabama-based U.S.-Israel Education Association, who was also present at the Iftar meal, said, “The willingness of all the participants in this special meal is one. Our desire is to create a united front in bringing about a breakthrough on the economic issue.”

She called for a separation of economics and politics, adding that “from our point of view, this would require the continuation of strengthening existing ties between the U.S. Congress and operations here in Judea and Samaria that are driven by the principle of economic equality.”

While Jabari has previously expressed political aspirations, he stated at the next morning’s press conference, “My top priority is to give opportunities to the Palestinian people. First, we must approach the economy; then we can address politics.”