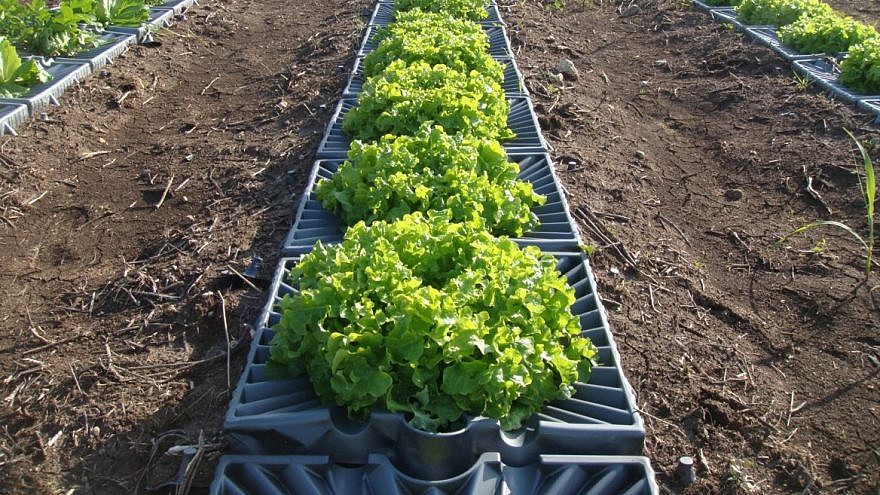 No other single country—certainly not one as young and as tiny as Israel—has contributed more breakthroughs in this area than Israel.

Since the 1950s, Israelis have not only been finding miraculous ways to green their own desert but have shared their discoveries far and wide.

While the concept of drip irrigation existed well before Israeli statehood, it was revolutionized by Israeli water engineer Simcha Blass in the 1960s and continues to transform farming across the globe.

Blass’s slow-release tubing formed the basis of the world-renowned Netafim company (sold for $1.5 billion to Mexichem in 2017) and other Israeli drip-irrigation and micro-irrigation businesses whose solutions are used worldwide.

One example of how Israeli drip irrigation has impacted food supply in foreign countries is Tipa (Drop), a kit that enables gravity to irrigate when there is no water pressure in rural areas. The Israeli Foreign Ministry has provided Tipa kits to hundreds of farmers in Senegal, Kenya, South Africa, Benin and Niger.

An average of 70 percent of the world’s water goes toward irrigation, partly because some areas still use wasteful flood irrigation. Israeli agri-tech companies such as CropX, Saturas,  Manna and SupPlant help customers across the world implement efficient drip irrigation programs to use less water and produce more and better crops.

About one-third of the food produced for human consumption globally is lost or wasted each year. In low-income countries, most of that loss happens in the early and middle stages of the production chain. One problem is that the majority of newly harvested grains and pulses get ruined by pests and mold before reaching the market.

Israeli-designed GrainPro Cocoons provide a simple and cheap way for African and Asian farmers to keep their grain market-fresh.

The huge bags, invented by international food technology consultant Prof. Shlomo Navarro, keep both water and air out. They’re used in about 100 countries including in Africa, Latin America and the Middle and Far East.

Amaizz launching a pilot in Bihar, India, with the Syngenta Foundation. CEO Aviram Tenenbaum is in the purple shirt.

Tel Aviv‐based Amaizz solves a problem for sub-Sahara African and Indian farmers when drying grains such as corn, which are subject to toxic fungal infestation as well as destruction by insects and other animals.

Amaizz offers protected electric or solar modular drying, disinfection and storage units that keep out pests and prevent fungus. The company also makes cool storage units for any type of grain, in addition to barley and maize threshers that cut down on time, labor and grain damage.

In 2016, Amaizz won the Israeli Grand Challenges Program for improving post-harvest handling and storage, and saving up to 50 percent of the losses caused by mishandling and depreciation.

As one of six Israeli startups chosen for the 2018 India-Israel Bridge to Innovation program of the Israel Innovation Authority at the initiative of both countries’ prime ministers, Amaizz now is conducting pilots with key players in the Indian market.

Mangoes provide a livelihood for thousands of farmers in developing countries. However, many mango growers in India, the Americas and West Africa have simply given up in the past few years because such a high percentage of their crops were ruined by various species of fruit flies.

That situation is being dramatically reversed by a novel product from Israel’s Biofeed, another of the six startups in the 2018 India-Israel Bridge to Innovation program.

Biofeed has demonstrated an overall decrease of Oriental fruit-fly infestation from 95 percent to less than five percent in a pilot test with Indian mango farmers, while a pilot program in Togo reduced infestation in various areas from 88 to 95 percent.

Here are just four examples of Israeli precision-agriculture companies whose solutions are used across the globe:

Croptimal performs real-time accurate tests of plant tissue, soil and water in the field, dramatically reducing the standard analysis procedure from 10 days to less than an hour.

Taranis combines high-resolution aerial imaging with computer vision and artificial intelligence to show farmers what’s happening in their plots down to the insect and leaf level, and analyzes that data to provide decision-making support.

Prospera makes a digital farming system that collects, digitizes and analyzes vast amounts of data to help growers control and optimize their production and growing systems.

Kibbutz Sde Eliyahu-owned Bio-Bee breeds and exports several species of beneficial insects and mites for biological pest control, and bumblebees for natural pollination, to more than 50 nations from India to Chile.

The company’s top seller worldwide is the tiny BioPersimilis, a highly efficient enemy of the spider mite, a devastating agricultural pest.

BioPersimilis is used by most of California’s strawberry farmers (BioBee’s single largest market) and by growers of peppers, tomatoes, potatoes, beans, corn, cucumber, melon, eggplant and ornamental flowers in order to reduce the amount of pesticides they use by up to 80 percent.

That’s a daunting challenge for small farms especially, which must be part of larger cooperatives if they want to sell abroad.

The AKOLogic system helps farmers manage any kind of crop according to any country’s import regulations.

“For each container they receive, buyers need to know that everything was done according to regulations. Now all the documentation is in one place in real time automatically, with full traceability from field to market,” says AKOLogic CEO Ron Shani.

Soft-launched in January 2015 in Israel, the system is now used by half of Israel’s farmers. The first overseas pilot of AKOLogic, in Angola in cooperation with the International Bank, enabled a cooperative of small farmers to export crops to Europe for the first time.

The company is now working with local partners in Balkan countries to enable small traditional farms to sell their crops in the European Union, and is seeking strategic partners to help implement AKOLogic in China, Singapore and South America. The system also is being implemented through a partner at heavily regulated medical cannabis farms in Israel and elsewhere.

Not every brilliant solution has to be high-tech. Tal-Ya Water Technologies makes a reusable plastic tray to collect dew from the air, reducing the water needed by crops or trees by up to 50 percent.

The square, serrated trays, made from non-PET recycled and recyclable plastic with UV filters and a limestone additive, surround each plant or tree. With overnight temperature change, dew forms on both surfaces of the Tal-Ya tray, which funnels the dew and condensation straight to the roots. If it rains, the trays heighten the effect of each millimeter of water 27 times over.

Inventor and CEO Avraham Tamir told ISRAEL21c that the trays also block the sun so weeds can’t take root, and protect the plants from extreme temperature shifts. “Farmers need to use much less water, and in turn much less fertilizer on the crop,” which translates to less groundwater contamination.

In the past 10 years, Asian countries including Vietnam and China have been investing heavily in setting up dairy-farming enterprises, and they rely on Israeli experience, expertise and equipment to do so.

The aquaculture industry is growing an average of six percent annually to meet ever-rising demand for fish and seafood.

But with more than half the fish consumed around the world grown on farms where fish are crowded into tanks and given massive amounts of antibiotics, hormones and pesticides, there’s an urgent need for sustainable and healthful solutions for commercial fisheries.

Israel has several such solutions on the market; here are one new and two veteran companies.

Since its founding in March 2013, BioFishency has installed its systems in countries such as Norway, Denmark, China, India, Bangladesh, Nigeria, Congo and Iraq. In November 2018, Biofishency won first place in the Fishtech Awards held in China. In March 2019, the company raised $2.4 million.

Seed breeding has been an Israeli specialty since the beginning of the state. Israeli scientists in academia, industry and the government’s Volcani Center Agricultural Research Organization have made many types of seeds more nutritious, high-yield and flavorful, and resistant to drought and disease, and have developed new fruit and vegetable varieties.

Equinom develops several varieties of hardy high-protein seeds. Its new patented sesame variety is set to open new markets for the cultivating this iron- and calcium-rich seed. The global sesame market is worth $9 billion annually.

Equinom’s sesame seeds have an enhanced nutritional profile and are shatter-resistant so that they can be harvested by machine. The need to harvest sesame by hand has kept the crop from reaching its full potential at market, and leads to much of the crop being lost to contamination as the pods shatter on the ground.

Hazera Seeds, a top Israeli seed company selling internationally under parent company Limagrain, has headquarters in Israel and in The Netherlands, with subsidiaries in 12 countries and an extensive distribution network in over 100 additional markets. Hazera recently opened new screening and trial stations in The Netherlands, Mexico and Turkey.

Another major Israeli seed breeder, OriGene Seeds, breeds vegetables for markets in more than 25 countries. OriGene specializes in R&D of the cucurbit family, which includes melons, cucumbers, squash and pumpkins. The company also has a new tomato-breeding program active in southern Mexico.

Pre-market food spoilage is a huge source of food waste throughout the world. Several Israeli companies are using cutting-edge materials to make sure more food gets to hungry consumers.

StePac and Tadbik jointly developed Xgo FreshLid, a “modified atmosphere” resealable lidding film, to extend the shelf life of fresh cherries from Chile and Peru on their journey from farm to fork—as far away as China.

StePac Xflow packaging for blueberries, spring onions and green beans reduces the amount of plastic used by up to 40 percent, while extending shelf life by improving air flow.

Valentis Nanotech is testing nanocrystal cellulose (CNC), made from abundantly available cellulose, in a coating that adds strength, UV blocking and antibacterial properties to food packaging.

Melodea is putting CNC into customized transparent gel package coatings for paper packages and cartons that are biodegradable, extremely strong and oxygen-resistant to extend the shelf life.

Filling an urgent need for cheaper, more healthful, sustainable and less polluting sources of protein, Israeli companies are piloting products made from insects, legumes and plant-based or cultured meat.

Flying Spark makes a protein powder and unsaturated oil derived from the larvae of fruit flies; and the multi-award-winning Hargol makes protein powder from farmed grasshoppers.

Chickpea-based protein concentrate (meat substitutes) providing a neutral-taste vegan protein that’s allergen-, gluten- and GM-free for use in a large assortment of foods, is made by InnovoPro and ChickP.

Israel has always made it a priority to share its technological advances with developing countries in Africa, Asia/Oceana, central Europe/Eurasia, the Middle East and Latin America/the Caribbean. The primary address for this activity is the Foreign Ministry’s MASHAV – Israel’s agency for international development cooperation.

Over the years, more than 280,000 professionals have participated in MASHAV courses in a wide range of languages and subjects including agricultural best practices aimed at transforming subsistence-oriented dairy and produce farms into market-oriented agribusinesses.

Training is held in the target countries as well as in Israel.

Other courses planned in 2019, in English and French, touch on subjects including agricultural education in African primary and secondary schools; intensive vegetable production; agribusiness tools for the rural African women; and agricultural development in arid regions.

This article was first published by Israel21c.