The persecution of Christians in the PA must stop 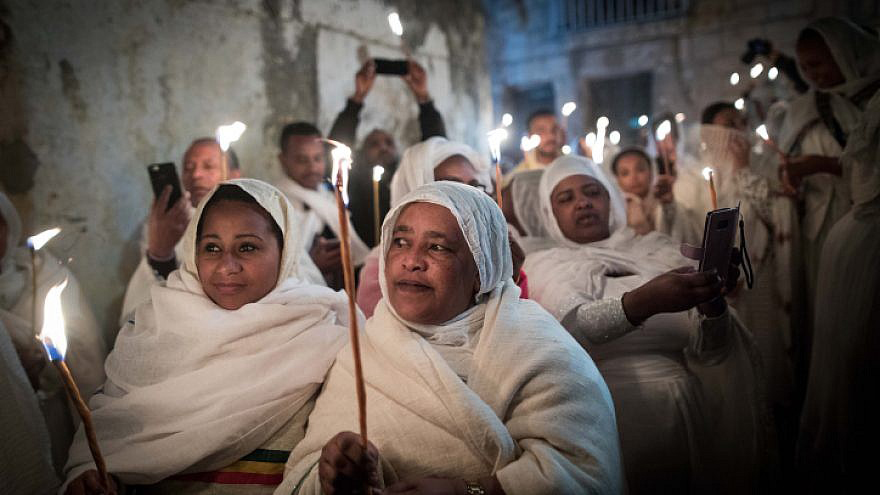 Ethiopian Orthodox Christian worshipers hold candles outside Deir Al-Sultan in the Church of the Holy Sepulcher during the ceremony of the Holy Fire in Jerusalem’s Old City, April 27, 2019. Photo by Noam Revkin Fenton/Flash90.

The ongoing international neglect of the plight of the Christians under Palestinian Authority rule could lead to the disappearance of Christianity in its very birthplace.

(May 27, 2019 / BESA Center) — Three grave events occurred recently involving Christians in the territories ruled by the Palestinian Authority. They left no mark on either the world or the Israeli media because they are not connected to Israel.

On April 25, the terrified residents of the Christian village of Jifna near Ramallah asked the P.A. to protect them after they were attacked by Muslim gunmen. The violence erupted after a woman from the village submitted a complaint to P.A. police that the son of a prominent, Fatah-affiliated leader had attacked her family. In response, dozens of Fatah gunmen came to the village, fired hundreds of bullets in the air, threw fire bombs, shouted curses and caused severe damage to public property. It was a miracle there were no dead or wounded.

Despite the residents’ cries for help, the P.A. police did not intervene during the mayhem — which lasted for hours. They have not arrested any suspects. Interestingly, the rioters called on the residents to pay jizya — a head tax that was levied throughout history on non-Muslim minorities under Islamic rule. The most recent victims of the jizya were the Christian communities of Iraq and Syria under Islamic State rule.

The second incident occurred during the night of May 13. Vandals broke into a church of the Maronite community in the center of Bethlehem, desecrated it, and stole expensive equipment belonging to the church, including the security cameras.

Three days later it was the turn of the Anglican church in the village of Aboud, west of Ramallah. Vandals cut through the fence, broke the windows of the church, and broke in. They desecrated it and stole a great deal of equipment.

As in the two previous incidents, no suspects were arrested.

According to its Facebook page, this is the sixth time the Maronite church in Bethlehem has been subjected to acts of vandalism and theft, including an arson attack in 2015 that caused considerable damage and forced the church to close for a lengthy period. However, even though P.A. leader Mahmoud Abbas himself was present on Dec. 24, 2018, at the party to mark the church’s reopening after it was renovated, the arson and other to acts of rioting and vandalism over the years received no coverage in the Palestinian media. In fact, a full gag order was imposed in many cases.

It is unlikely that the latest wave of attacks will lead to the arrest, let alone prosecution, of any suspects. The only thing that interests the P.A. is that events of this kind not be leaked to the media. Fatah regularly exerts heavy pressure on Christians not to report the acts of violence and vandalism they frequently suffer, as such publicity could damage the P.A.’s image as an actor capable of protecting the lives and property of the Christian minority under its rule. Even less does the P.A. want to be depicted as a radical entity that persecutes religious minorities. That image could have negative repercussions for the massive international, and particularly European, aid the P.A. receives.

Though the Christians in the P.A. avoid saying so publicly, many of them fear — with good reason — that Muslim aggression against them will only escalate. Such fears are all the stronger in light of the thunderous silence of the Western (and Israeli) media in the face of the Christian minority’s ongoing disappearance from the P.A. and Islamic lands in general — in striking contrast to the growth, prosperity and increasing integration of the Christian community in Israel proper.

The Christians of the Western world must demand that the P.A. arrest the suspects in the latest attacks and begin guarding the Christian places of worship under its rule. The ongoing international neglect of the plight of the Christians under P.A. rule can only lead to the vanishing of Christianity from the very place where it first emerged.

Dr. Edy Cohen is a researcher at the Begin-Sadat Center for Strategic Studies and author of the book “The Holocaust in the Eyes of Mahmoud Abbas” (Hebrew). This article originally appeared here and is reprinted with permission.