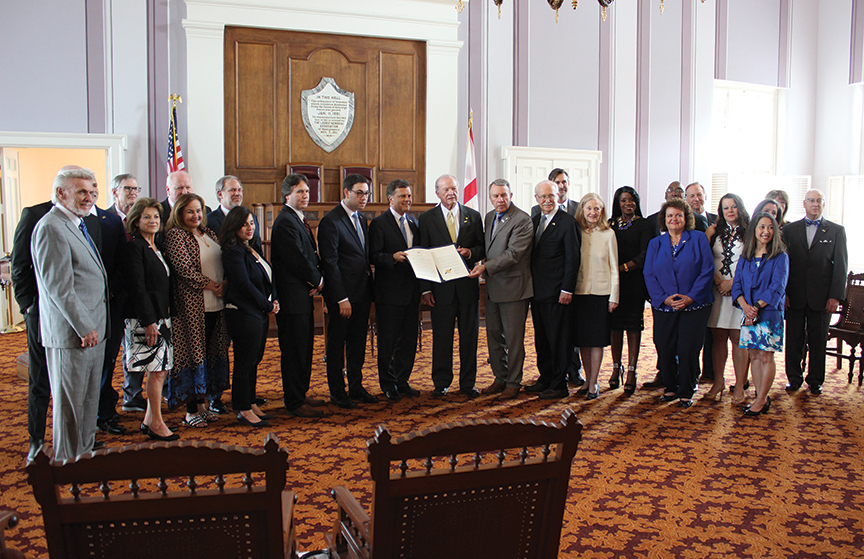 It was a significant setting as Christian and Jewish pro-Israel advocates from across Alabama celebrated the state’s official recognition of Jerusalem as Israel’s “eternal, undivided capital” on May 20 in Montgomery.

The historic resolution was signed by Governor Kay Ivey on April 23, after passing both chambers of the Alabama Legislature. While Florida had a resolution in January recognizing Jerusalem as Israel’s capital, the Alabama resolution is the first to use the “eternal, undivided” terminology that is common among pro-Israel advocates.

The setting in the Old House and Senate Chambers was deliberate, as in 1943, Alabama became the first state to call for the establishment of a Jewish homeland in the land of Israel, and that bill passed in those very rooms.

John Buhler, co-chair of the Alabama-Israel Task Force, said both events “are worthy of remembrance and worthy of honor.”

Citing the significance of the moment, Sen. Arthur Orr, who launched the effort in the Senate, read the entire resolution before presenting a copy to Guy Gilady, deputy consul general at Israel’s consulate in Miami. Orr was joined at the podium by co-sponsor Sen. Jabo Waggoner and Rep. Mac McCutcheon, speaker of the House.

The resolution gave the history of Jerusalem from Biblical times, its post-1948 division and 1967 reunification, and how Israel keeps Jerusalem open to those of all faiths.

Buhler said the resolution was designed so it can be easily adapted by other states.

Gilady said “here in Alabama, there is one thing Israelis know. We are among friends.”

He said Alabama shows not just support of Israel, but “a true alliance, a true love story” that goes “beyond symbols.”

Alabama Chief Justice Tom Parker and his wife, Dottie, hosted the delegation in the Judicial Building before and after the ceremony.

After the ceremony, the group held a dinner to discuss events of the day, discuss the changing nature of the Jewish-Christian relationship to a closeness not seen until recent years, get to know each other’s work and celebrate the resolution.