CUFI Summit: This Year, it was Christians United Against Anti-Semitism 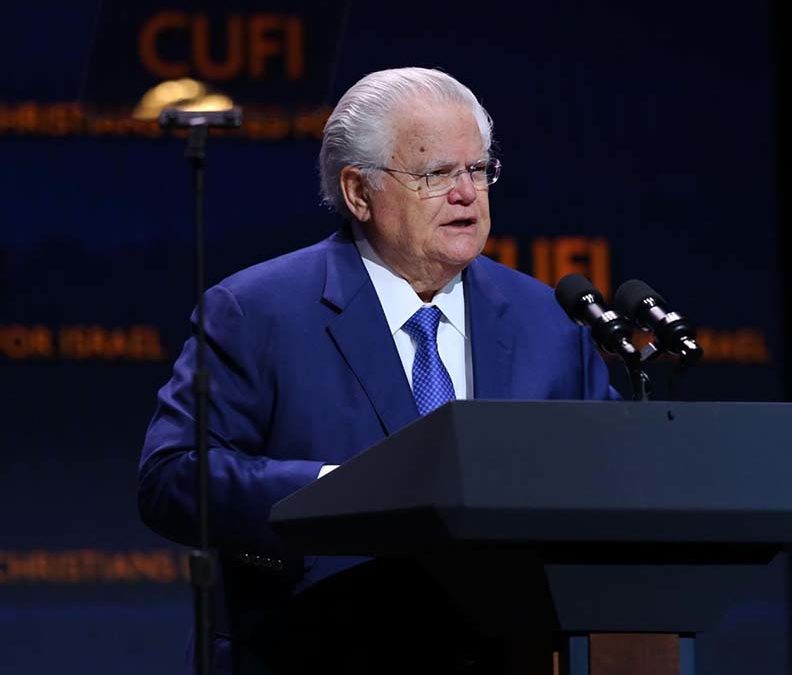 While Israel is always the primary focus for the now 7 million member Christians United for Israel, at this year’s Washington Summit, the emphasis was on fighting the rise of anti-Semitism “in our Congress, in our churches and on our college campuses,” as CUFI founder Pastor John Hagee declared to over 5,000 delegates.

Shari Dollinger, co-executive director of CUFI, said this year’s Summit, held on July 8 and 9, was “the first time CUFI felt it necessary to commit an entire plenary to anti-Semitism,” and she was speaking in her “role as a Jewish mother” in stating that “the world my children are growing up in is a different world” due to recent increases in anti-Semitism and anti-Semitic rhetoric.

A centerpiece of the Summit is delegate visits to Capitol Hill, and this year CUFI’s “primary mission” for lobbying wasn’t about Israel, but was to promote the Anti-Semitism Awareness Act, now in the Senate, which directs the U.S. Department of Education to use the International Holocaust Remembrance Alliance’s definition of anti-Semitism “when investigating allegations of unlawful harassment against Jewish students.”

The U.S. Department of State uses that definition to judge anti-Semitism around the world, it was repeatedly pointed out.

Sandra Parker, chair of the CUFI Action Fund, noted that Kenneth Marcus, assistant secretary for Civil Rights at the U.S. Department of Education, wrote a “Dear Colleague” letter, guiding the Department of Education to use the definition until the law is passed, but a letter does not have the permanence of a law and can be rescinded by a successor.

Parker said anti-Semitism is becoming so commonplace, “people are becoming inoculated” and are often under the mistaken impression that anti-Semitism comes only from those wearing white hoods.

A common objection to the legislation, especially regarding college campuses, is that such measures restrict free speech. Parker said the law has nothing to do with speech, but “regulates conduct.” When harassment takes place, “then we can consider whether the harassment stems from anti-Semitism” by using the definition.

The American Civil Liberties Union has objected to the legislation, saying it “risks chilling the free speech of students on college campuses” and accuses it of “incorrectly equating criticism of Israel with anti-Semitism.”

Hagee said “CUFI is going to draw a line in the sand” on this legislation, as the act “has been held up far too long.”

He said “You cannot defeat what you will not define” and this will help in the battle against the “anti-Semitism that hides in plain sight and masquerades as anti-Zionism.”

Lest one think this is a partisan issue, Hagee noted that “it was the Republican House that failed to pass this bill the last go-round,” and warned not to make anti-Semitism “a political football.” Last year, when Republicans still controlled the House, the House bill had 50 co-sponsors, 15 Democrats and 35 Republicans.

This year in the Senate, there are 16 cosponsors, nine Republicans and seven Democrats.

Sen. Tim Scott of South Carolina said he is proud to be the primary sponsor of the act, and was “thankful” that CUFI would be going to Congress “and take on the responsibility of expanding the number of sponsors.”

He added that the House “is where we know we will need some prayer.”

Vice President Mike Pence blasted the rise of anti-Semitism around the world, on campus and “even in the halls of Congress.” He recalled being asked by Rep. Tom Lantos, the only Holocaust survivor to serve in Congress, to chair a Congressional task force on anti-Semitism in 2007.

“We formed that task force because of the broad consensus that existed in the Congress: a support for Israel, support for the Jewish people,” he said. “But how things have changed.  It’s astonishing to think that the party of Harry Truman, which did so much to help create the State of Israel, has been co-opted by people who promote rank, anti-Semitic rhetoric, and work to undermine the broad American consensus of support for Israel.”

He added, “Anti-Semitism has no place in the Congress of the United States of America or anywhere in this nation.”

Hagee called out “the inability of Congress to prevent the fringe opinions to (hijack) the national narrative,” saying “don’t tell us how pro-Israel you are if you don’t call out anti-Semitism in the halls of Congress.”

Malcolm Hoenlein, executive vice chairman of the Conference of Presidents of Major American Jewish Organizations, also alluded to the Congressional controversy, saying “We have to stop letting a small group of extremists dominate with their ill-advised comments.”

Hoenlein said anti-Israel movements “are shams. They are really covers for other things, but they can’t admit it.”

He also mentioned on-campus issues, noting that “The Invention of the Jewish People,” which says today’s Jews are mainly recent converts from Europe with no ties to the Middle East, is a textbook used at Columbia University.

Author and radio host Dennis Prager calls anti-Semitism “the greatest evil early warning system in the world,” because it exposes “all you need to know about the morality of the people espousing it.”

He dismissed those who say there is a difference between hating Jews and hating Israel. “Oh, I love Jews but I’m anti-Zionist… okay, what if someone said ‘I love Italians but I don’t think Italy has a right to exist’?”

Much of the hate today comes from the left — not liberals, he clarified — and Islamists. “Everybody knows” that not every Muslim is an anti-Semite, Prager said, but there is a growing problem of Islamic anti-Semitism, especially in Europe, and “it is astonishing you can’t talk about this in polite company.”

Hagee called anti-Semitism a sin, saying “if you mistreat the Jewish people, you are sticking your finger in the eye of God.”

A Christian anti-Semite “is an oxymoron,” he said, and “all anti-Semites live under the curse of God Almighty.”

Christians and Jews “need to wage war together against this evil,” as “anti-Semitism is not a Jewish problem, it’s everybody’s problem.”

CUFI also promoted its campaign to expose and fight anti-Semitism, #ShineTheLight, with a series of videos. “Don’t curse the darkness. Shine the light,” Hagee said.

He said, “When you see public officials who indulge in anti-Semitism, we cannot sit idly by… isolate them and remove them from public office.”

Irving Roth, a Holocaust survivor who has spoken to over 700 CUFI events, recently led a delegation of CUFI members to visit Auschwitz, where he arrived in May 1944. He said the lies that were spread about the Jews “are repackaged” today.

While there is a movement to boycott and destroy Israel, “it’s not 1930, not 1940” because “today the Jewish people have a land, a state, an army, a navy and an air force.”

But, Roth said, “it’s not enough,” and thanked CUFI for being an additional leg to support Israel and the Jewish people. “You have committed yourself to making sure the evildoers of the world don’t destroy the state of Israel. It is in great thanks I come to you, continue your fight. Let’s be encouraged by what is going on, not discouraged.”

Pastor Chris Edmonds of Maryville, Tenn., gave an example of standing up to save Jews, by recounting the story of his father, Master Sergeant Roddie Edmonds. In a Nazi prisoner camp, Edmonds was the highest ranking non-commissioned officer for the American prisoners. When the Nazis ordered that only Jewish soldiers would fall out the next morning, he told the 1,200 Americans that everyone would fall out.

When an enraged Nazi guard approached him the next morning, Edmonds said “we are all Jews here,” and refused to single out the Jewish soldiers, even with a gun at his head. That action saved an estimated 200 American Jewish soldiers.

Pastor Edmonds said his father “fought evil anti-Semitism with faith and conviction that was deep in his soul.” He didn’t learn of his father’s actions until long after he had passed; Yad Vashem named him Righteous Among the Nations after the story emerged.

Today, Pastor Edmonds speaks about “Roddie’s Code” to promote heroism among the students of today — “Keep showing up, keep standing up, keep speaking up.”

Hagee said today’s Christians weren’t around for the Crusades, the Inquisition or the many other times when Jews were attacked throughout history. “But we are here now, and now is when we need to do something powerfully, positively and permanently.”

CUFI was formed, he said, “not to shuffle papers and tell war stories, but to engage… and destroy anti-Semitism in our generation.”