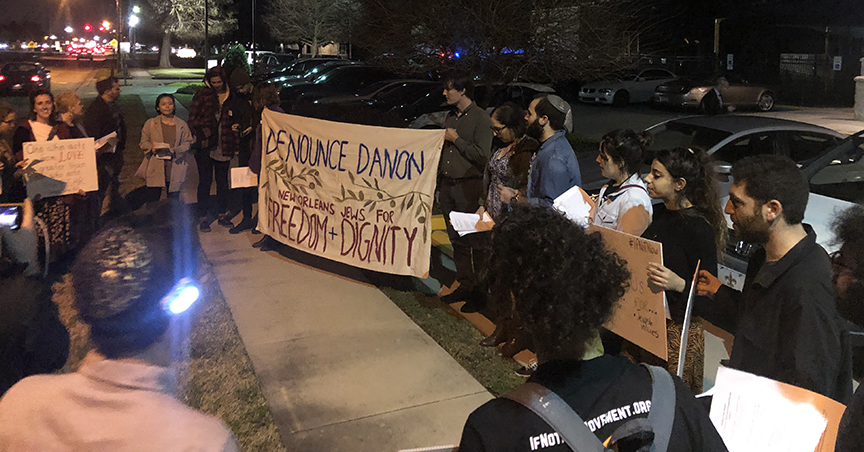 In January, members of IfNotNow protested the visit of Israeli Ambassador Danny Danon to New Orleans

(JNS, July 30) — The progressive Jewish activist group IfNotNow has generated several headlines in the past year by challenging mainstream American Jewish organizations on its support for Israel, and more recently, for its campaign to bait 2020 Democratic presidential candidates to condemn the so-called “occupation” of the disputed territories by Israel.

While these moves may seem outside of the mainstream consensus on Israel, more troubling evidence has emerged on the group’s ties with the virulently anti-Semitic organization American Muslims for Palestine (AMP).

The Investigative organization Canary Mission recently launched a campaign and report revealing a strategic partnership between IfNotNow and AMP, a group that has incited and celebrated violence against Israelis, denied Jewish peoplehood and mocked the Holocaust on social media.

“The Jewish community should find the AMP and IfNotNow partnership particularly worrying,” according to Canary Mission. “IfNotNow is not a youthful Jewish organization, but in fact, it’s “a well-trained, radical fringe group that has no qualms about partnering with anti-Semites.”

Canary Mission’s report shows that 58 IfNotNow members have actively partnered or trained with 25 of AMP’s most anti-Semitic professional activists.

At an event co-hosted by the two groups, University of California, Berkeley Professor Hatem Bazian, the anti-Semitic organizing force behind Students for Justice in Palestine and AMP founder, stated that “ … AMP and IfNotNow are coming together,” in May 2018. Bazian has previously spread classic anti-Semitism, denied Jewish peoplehood and compared Israel to Nazi Germany, stating his personal approval of the partnership with IfNotNow.

Taher Herzallah, who has been known for advocating violence against Israeli Jews, in addition to spreading an anti-Semitic conspiracy theory and having been arrested twice for anti-Israel disruptions, was invited by IfNotNow leaders to train their members.

IfNotNow members, Canary Mission shows, led protests together with Herzallah in 2017 and 2018.

Neveen Ayesh, who has advocated for violence against Jews, said that being Jewish was a “#crimeworthyoftherope” and called to “burn” Israelis into “ashes.” The Canary Mission report shows that three IfNotNow activists who staged a “walk-off” from a Birthright Israel trip conducted an exclusive livestream conference call with Ayesh in July 2018.

“The deep AMP/IfNotNow relationship we revealed in this campaign is all the more unbelievable since AMP’s activists have spread such intense hatred of Jews — some of the worst we have ever found,” Canary Mission told JNS.

For example, the organization notes, Leena Yousef of AMP-Chicago tweeted, “I believe in [the] holocaust. One of my fav parts of history.”

Mohamad Habehh of AMP-NJ called Jews “dogs” and wished “the worst in life” to Jews: “If you work with the yahood [jews] idc if you’re Muslim or atheist you’re a kalb [dog] and you deserve the worst in life.” He has also tweeted about the “Knockout Game,” saying the game should be applied to assault and sucker punch Jews unconscious without warning.

Ahmad Aburas of AMP-NJ tweeted against Palestinian negotiations with Israel and in support of the terrorist organization Hamas, saying, “We will resist until we get our freedom without your BS negotiations ! #كلنا_حماس [#We_Are_All_Hamas].”

According to Canary Mission, while condemning anti-Semitism of the AMP is very important, it is even more “mind-boggling” to see the willingness of a self-proclaimed “vibrant and inclusive movement within the American Jewish community” to work directly with an organization whose members specifically state that they want to see violence against Jews and see Israel destroyed.

“IfNotNow’s leadership have willingly and knowingly steered their organization in this direction,” stated the organization, posing that the general American public “needs to how nefarious AMP is,” especially as it uses IfNotNow to “provide it with Jewish cover.”

Canary Mission also warns that IfNotNow shares AMP’s pivotal goal to influence American politics. The report states that since its founding in 2006 by Bazian, AMP has attempted to turn American Jews against Israel on college campuses and beyond, in addition to congressional lobbying efforts and attempts to influence intersectional politics. The group employed six full-time activists to follow the summer campaign trails of various Democratic candidates and lobby them to take a position against “the occupation.”

In addition, IfNotNow co-founder Max Berger, positioned himself as a director of progressive partnerships for Massachusetts Sen. Elizabeth Warren’s 2020 Democratic presidential campaign. Berger, an avowed anti-Israel activist, recently came under fire for a 2013 tweet exposed by Canary Mission in which he remarked that he would be “friends with Hamas.”

“IfNotNow has their sights on influencing the 2020 presidential elections, lobbying presidential candidates and claiming to represent a new generation of young American Jews,” Canary Mission noted, when in reality it is “a fringe far-left group that attacks mainstream Jewish institutions like Birthright and Hillel International while partnering with the virulently anti-Semitic AMP.”

Canary Mission called on IfNotNow to disavow its ties with AMP and “apologize to the Jewish community and answer for their partnership with the anti-Semitic AMP.” However, it noted, “their silence so far is damning.”