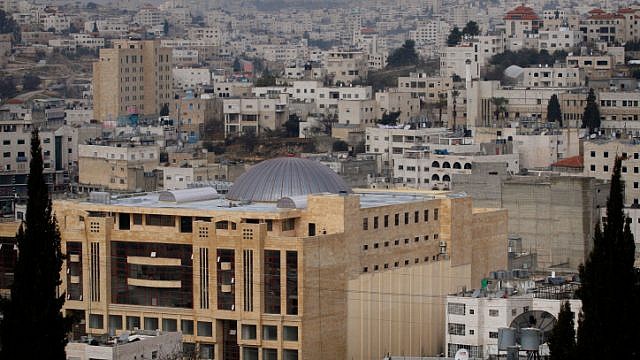 General view of the West Bank city of Hebron with the new shopping center in the front, Jan. 28, 2008. Photo by Michal Fattal/Flash90

(JNS) Nonprofit advocacy group J Street has recently been campaigning against Birthright Israel, an educational program that sponsors free 10-day heritage trips to Israel for young Jewish adults. Over 600,000 young adults have participated in the program since its founding in 1999.

According to The New York Times, “In the West Bank settlement of Har Gilo,” the J Streeters “received a harsh history lesson from a veteran opponent of the occupation. Then they toured an impoverished, water-starved Palestinian village that Israeli settlers want to demolish, and visited the city of Hebron, where repeated outbreaks of violence have turned an entire Palestinian business district into a ghost town.”

The J Street trip and the Times article about it were highly criticized in a pointed piece in Commentary magazine. The Commentary review noted that there was not a word in either the trip or the Times article “on the murderous Palestinian anti-Semitic violence that necessitates Israel’s policing of such places [as Hebron] to begin with,” “no mention of the kleptocratic Palestinian leadership that’s consigned generations of Palestinians to certain ruin” and “no mention of the fact that the Palestinians have, again and again — and again — refused to make peace with Israel when it was offered.”

However, there was one particular failing of the J Street trip that has not received the attention it deserves.

A favorite stop of anti-Israel activists escorting celebrities on tours of Israeli “oppression” in the West Bank is the now-shuttered Shuhada Street in the Old City of Hebron. Shuhada Street is a half-mile long road in Hebron which used to be the thriving market center of the city, frequented by Palestinians and Israelis daily. Today, it is a virtual ghost town, largely shut down by the Israeli military for security reasons. A visit to Shuhada Street is designed to underscore alleged Israeli apartheid and the cruelty of the Israeli occupation in the West Bank.

However, as discussed at length here, the tale of Shuhada Street is a myth. Shuhada Street was a highlight of J Street’s alternative tour and the group fell for the myth, hook line and sinker. To date, no one has pointed out that the J Streeters were duped on their visit to Hebron.

The Times‘ fawning article on the J Street tour featured a picture of Shuhada Street with the following caption: “The students toured what were once Hebron’s main market streets, now a graveyard of abandoned storefronts and apartments.”

The effect of the visit on the student participants was dramatic. As the Times reports, two participants said they were “reconsidering” their belief in a Jewish state. One stated that he “came in here a very ardent Zionist,” but that he was “starting to doubt … whether Zionism is even worth pursuing anymore.” Another participant described walking “in stunned silence through the post-apocalyptic streets of Hebron, where severe restrictions on movement have shuttered most Palestinian storefronts.”

These reactions were similar to those of others who have been escorted through Shuhada Street by pro-Palestinian activists. Pulitzer prize-winning American Jewish author Michael Chabon on a tour of Shuhada Street called it “the most grievous injustice I have ever seen in my life.” Hollywood actor Richard Gere likened the situation in Hebron to segregation in the Jim Crow-era American South. Jeremy Ben Ami, the head of J Street, has said of Shuhada Street: “It is impossible to be a Jew and not feel shame at the way Palestinians are treated in the center of Hebron.”

However, what is generally missing from such pro-Palestinian activist tours (the J Street tour was no exception) are the following salient facts:

• The Jewish connection with Hebron is deep and dates back almost 4,000 years to when Abraham, the father of Judaism, came to the Land of Israel and settled in the city. Abraham purchased a plot of land, known as the Cave of the Patriarchs, as a burial plot. The site is the final resting place of Abraham and Sarah, Isaac and Rebecca, Jacob and Leah, the Patriarchs and Matriarchs of the Jewish religion. As a result, Hebron is considered to be the second holiest city for Jews after Jerusalem.

• Present-day Hebron is divided into two parts. The Palestinian Authority controls 97 percent of the city, and forbids Jews to enter. The Israelis control three percent of the city, including the site of the Cave of the Patriarchs, which is open to people of all faiths, as Muslims and Christians also claim descent from Abraham.

• Unlike other Palestinians cities in the West Bank (Ramallah, Nablus, Jericho), where Jews are prohibited by law from living or even visiting, 85 Jewish families reside near the Cave of the Patriarchs in Hebron. Jews have suffered violence, including massacres, by Arabs in Hebron since the 1920s. Suicide bombings and shootings caused the Israeli authorities to largely shut down Shuhada Street as a security measure, resulting in its present abandoned condition.

• In place of the now shuttered fruit and vegetable stalls on Shuhada Street, a new, thriving Arab commercial district exists less than a mile away, surrounded by almost 200,000 Palestinians (and no Jews, who are forbidden to enter this Palestinian-controlled area). The new commercial district includes an ultra-modern, nine-story indoor mall, Kentucky Fried Chicken and Domino’s Pizza franchises and all the accoutrements of a modern, sophisticated commercial area.

Very few outsiders can or do visit this part of modern Hebron. The J Street tour was no exception. In lamenting the demise of the old market on Shuhada Street, none of the J Street tourists seemed at all aware of the prosperous new commercial market nearby.

• The J Streeters were unaware that “Shuhada Street […] is not the main thoroughfare of Hebron as claimed. It is a comparatively small road in the Old City. Hebron is a large, thriving city, with massive factories, businesses and shopping malls. Hebron is the most prosperous city and main center of economy for the P.A., with more than 40 percent of the P.A. economy produced there. There are 17,000 factories and workshops in all areas of production. There are four hospitals, three universities and an indoor 4,000-seat basketball stadium.”

The myth of Shuhada Street, which the J Street alternative tour completely bought into, is a metaphor for the larger Israeli-Palestinian conflict. Like the rest of the Palestinian narrative, the myth of Shuhada Street as a symbol of supposed Israel apartheid and oppression (just down the street from a modern mall where Jews are prohibited) is grounded in misrepresentations, omissions and facts taken out of context. It lies at the heart of the Palestinian propaganda machine. This myth must be exposed.

Steve Frank is an attorney, retired after a 30-year career as an appellate lawyer with the U.S. Department of Justice in Washington, D.C. His writings on Israel, the law and architecture have appeared in publications including The Washington Post, The Chicago Tribune, The Jerusalem Post, The Times of Israel and Moment magazine.