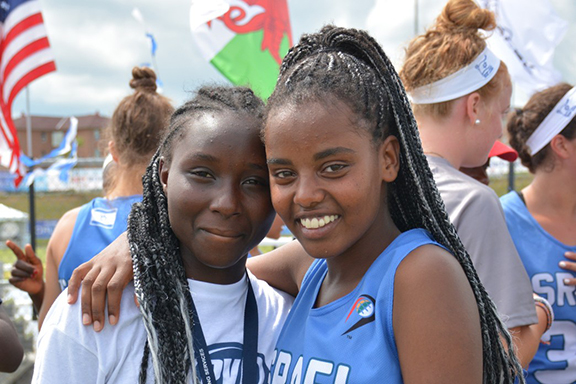 Israeli Lacrosse Player Atsede Mekonen with a member of Kenya’s U19 team.

A lacrosse match in the world championships turned into an unexpected opportunity for Israel’s national team to do some good, coordinated by a member of Birmingham’s Jewish community.

The Women’s Lacrosse 2019 U19 World Championship is currently underway in Peterborough, Canada. During the Aug. 6 match between Israel and Kenya, which was delayed an hour due to rain, the team from Kenya kept slipping and falling on the wet turf, as Israel won, 13-4.

After the game, Birmingham’s Michael Duvdevani, whose daughter, Ella, is on the Israeli team, was talking to Israel’s goalie, Lielle Assayag, who told him that the Kenya team did not have any cleats.

According to the Peterborough Examiner, many of the Kenyan athletes live “in abject poverty in two-bedroom mud shacks housing families of eight,” and they had to overcome numerous obstacles to even get to the tournament. They had ordered new running shoes, but upon arriving in Canada, they discovered they were in U.S. sizes and not the U.K. sizes they ordered.

Tournament committee member Rose Powers and brokers from Exit Realty then purchased new running shoes for the girls, as they would also be practical for everyday use back home.

But running shoes were no match for the wet turf, so Duvdevani — founder and CEO of Complete Feet, a pedorthic clinic in Birmingham — sprang into action. He contacted the Kenyan coach and coordinated donations from the Israeli team parents to purchase cleats for the Kenyan athletes. Within hours, the Cleat Project was a success.

The next day, the Kenyan team attended the Israel-Belgium match, having been told that they were going to watch Belgium before playing them the next day. After the game, as Team Israel stood on the field, Duvdevani said the Kenya team had “played good, they played hard, they played strong” the day before, but “you shouldn’t have to put up with slipping and sliding, you should have the same quality equipment as everyone else.”

With that, he called each Israeli team member forward to surprise each of the Kenyan athletes with her own new cleats.

Afterwards, he commented that “it has been a great day for Israel Lacrosse.”

Is it the shoes? On Aug. 8, Kenya beat Belgium, 16-9, breaking a three-game losing streak since winning their opener against Jamaica.

Israel gained its first-ever victory in the U19 tournament, against Belgium, 17-4, followed by the Kenya win. Israel had been winless in the 2015 tournament in Scotland.

On Aug. 7, Israel defeated Belgium again, 16-6, and is scheduled to play Ireland on Aug. 9. The winner of Israel’s next match will go on to play for 17th place in the 22-team field, while the loser will play for 19th place. The opponent? Either Chinese Taipei… or Kenya.

Thus far, Ella Duvdevani has appeared in all six matches, with one assist.