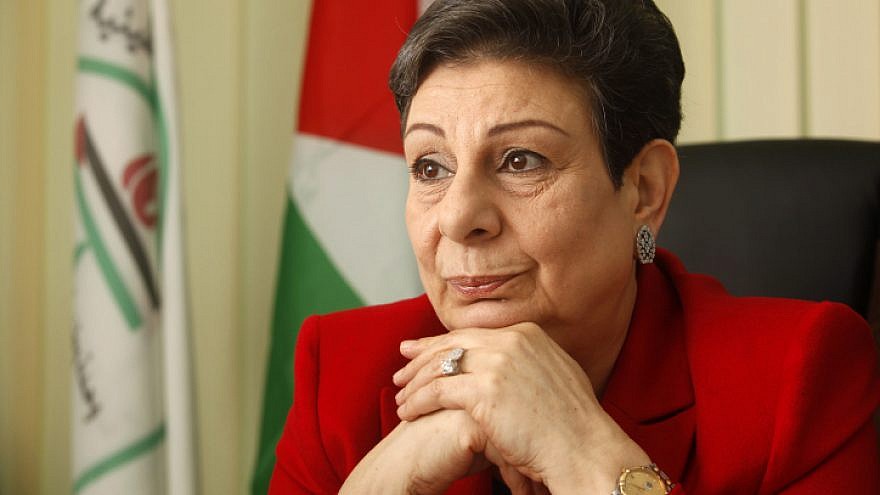 Palestinian politician Hanan Ashrawi in her office in the West Bank city of Ramallah. Jan. 31, 2012. Photo by Miriam Alster/Flash90.

(August 16, 2019 / JNS) The Palestinian groups that were part of Rep. Rashida Tlaib (D-Mich.) and Rep. Ilhan Omar (D-Minn.) canceled trip to Israel and the West Bank have a public record of openly expressing anti-Semitism, supporting the BDS movement, as well as fostering sympathy of and links to terrorist groups.

According to the itinerary released by Israel’s public broadcaster Kan, the congresswomen were scheduled to meet with people from Palestinian groups Miftah, who was also sponsoring the trip, and the Defense for Children International-Palestine (DCI-P).

“While we do not support policies that would block these U.S. lawmakers from entering, we note how they exploit their standing to partner with groups such as Miftah that promote anti-Jewish hate and advocate against peace and coexistence, as well as at least one NGO linked to the PFLP terror group, the so-called Defense for Children International-Palestine,” NGO Monitor told JNS.

In his statement on Israel’s decision to bar the congresswomen, Netanyahu also noted the Palestinian group’s support for BDS and ties with terrorism.

“[T]he itinerary of the two congresswomen reveals that the sole purpose of their visit is to harm Israel and increase incitement against it,” said Netanyahu. “In addition, the organization that is funding their trip is Miftah, which is an avid supporter of BDS, and among whose members are those who have expressed support for terrorism against Israel.”

Founded in 1998, Miftah’s vision is a “sovereign, independent, democratic, tolerant and inclusive Palestinian state, which grants Palestinians their basic rights, preserves their dignity, and enjoys international recognition and respect,” according to the group’s website.

Despite such claims, Miftah, which is mainly funded by a number of E.U. countries and the United Nations, has been tied to terrorist sympathizers and anti-Semites, as well as openly accusing Israel of committing atrocities and support for the BDS movement.

Miftah founder Hanan Ashrawi, also chair of its board of directors, has also accused Israel of “persistent colonialism, apartheid, racism and victimization,” and said in a 2017 interview that Palestinian terrorist attacks “are seen by the people as resistance. And you cannot somehow adopt the language of either the international community or the occupier by describing anybody who resists as terrorists.”

Miftah’s website also praises Wafa Idress, a female suicide-bomber who killed an 81-year-old Israeli and wounded 150 others in January 2002 as part of the “resistance movement.”

In 2013, Miftah apologized for an article on its website using a blood libel and accusing Jews of using “the blood of Christians in the Jewish Passover.”

Similarly problematic, DCI-P, which is the Palestinian branch of the Geneva-based that says its mission is to “promote and protect the rights of Palestinian children,” has ties to the Popular Front of the Liberation of Palestine (PFLP), which has been designated as a terror group by the United States, European Union, Canada and Israel.

According to NGO Monitor, several past and present board members and employees of the group have ties to PFLP.

“DCI-P leads the campaign exploiting children to promote demonization of Israel and is linked to the PFLP terror group. Many of its allegations are false and part of attempts to smear Israel with allegations of “war crimes” and promote BDS,” said NGO Monitor.

DCI-P has also been behind the anti-Israel legislation introduced by Rep. Betty McCollum (D-Minn.), which Omar and Tlaib are co-sponsors.

Daniel Pipes, president of the Middle East Forum, told JNS that he views the Palestinian groups as more extreme than Omar and Tlaib.

“The groups associated with the planned Omar-Tlaib visit to ‘Palestine’ are perhaps even more extreme than these two members of Congress in their hatred of Jews and Israel. This fact points to the effort needed either to educate the duo, discredit them or work against their re-election.”

However, he added, “it does not make excluding them from Israeli-controlled territory a good decision.”