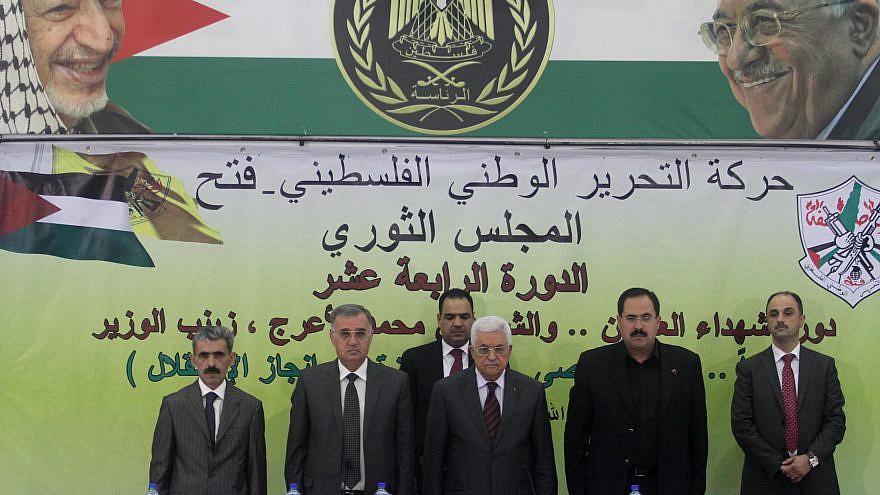 Palestinian leader Mahmoud Abbas (center) delivers a statement at a conference in Ramallah on Oct. 18, 2014. Photo by Flash90.

(JNS) — Mahmoud Abbas, the head of the Palestinian Authority, recently claimed that the Palestinians were the descendants of the Canaanites. “This land is for its people, its residents and the Canaanites who were here 5,000 years ago — and we are the Canaanites!” he declared, vowing that every Israeli stone and house “built on our land” would end up “in the garbage dump of history.”

Any Western Palestinian supporter might have been left somewhat perplexed. After all, it’s an article of faith among those hostile to Israel that the indigenous inhabitants of the land are Palestinian Arabs who have been supplanted by Jewish occupiers.

Since Canaanites were said to have been conquered by the Jews, Abbas is laying claim to Canaanite ancestry to give the Palestinians a prior right to the land of Israel. But if they were actually Canaanites, then they can’t be Arabs, who many centuries later came, as the name implies, from the Arabian Peninsula, just as the Philistines, from whom in other moods the Palestinians also claim to have descended, came from Crete.

Abbas’s argument is, of course, ludicrous. The fact is that the Jews were the only people for whom the land of Israel was ever their national kingdom, several centuries before the creation of Islam.

The Jews are the only extant indigenous people of the land. Palestinian identity was invented in the 1960s in order to destroy the Jews’ claim to Israel and airbrush them out of their own history.

From time to time, this inconvenient historical truth has been blurted out by Arabs themselves. In 1937, a local Arab leader, Auni Bey Abdul-Hadi, told the Peel Commission, which ultimately suggested the partition of Palestine: “There is no such country as Palestine! ‘Palestine’ is a term the Zionists invented!”

In 2012, Palestinian minister Fathi Hammad said: “Brothers, half of the Palestinians are Egyptians and the other half are Saudis. Who are the Palestinians? We have many families called Al-Masri, whose roots are Egyptian. Egyptian! They may be from Alexandria, from Cairo, from Dumietta, from the North, from Aswan, from Upper Egypt. We are Egyptians. We are Arabs. We are Muslims.”

All of this has been totally ignored by Westerners who continue to promote the Palestinians’ fictitious identity. Now, however, a stunning if inadvertent acknowledgement of the truth has emerged from an unlikely source.

Nazmi al Jubeh, an associate professor of history and archaeology at Birzeit University outside Ramallah, told a U.N. conference last June that there was no evidence linking the Jews to Jerusalem.

Thus far, so predictably mendacious. But thanks to the Elder of Zion website, a piece has now surfaced written by al Jubeh in 2006 in which he demolished the myth of Palestinian identity and made plain that it was invented solely to destroy Zionism and Israel.

Not that he acknowledged the Jews’ own history in the land. He made correct but passing reference to the Romans renaming Judea as “Palestina” in order “to challenge the memory of the Jews” after the Romans put down “the Jewish rebellion.”

Yet he didn’t provide the context for this by explaining that the Romans had crushed the Jewish kingdom, which had existed for centuries before being conquered in turn by successive waves of colonial invaders.

Instead, he claimed that the “Palestinian Jews, an essential component of the Palestinian people, started at the beginning of the twentieth century to identify themselves with the Zionist movement, thus separating themselves from the rest of their own people… ”

Despite this egregious and absurd falsification of Jewish history, the striking element of al Jubeh’s account is his admission of what we know to be objectively true — that, from the earliest times, there was no Palestinian identity.

Those living in Palestine from the time of the Romans, he wrote, were “mostly part of a greater regional or international political entity, which usually housed several nations, ethnic groups and cultures.”

Similarly, today’s Palestinians, he wrote, “are the result of accumulated ethnic, racial, and religious groups, who once lived, conquered, occupied, and passed through this strip of land.

“Wars and invasions have never totally replaced the local population in any period of history; they rather added to, mixed with and reformulated the local identity. The Palestinian people are the Canaanites, the Philistines, the Jabousites, the Assyrians, the Babylonians, the Egyptians, the Aramaeans, the Greeks, the Romans, the Byzantines, the Arabs, the Turks, the Crusaders, and the Kurds, who once settled, conquered, occupied or just passed through Palestine.”

What gave the Palestinians their identity, he said, was their “struggle” against Zionism and the State of Israel. “There is no way to understand this identity apart from the conflict.”

It became internationally recognized as “a symbol for liberation and for the anti-colonial struggle.” Only after the 1967 Six-Day War did the Palestinians start trying to flesh this out by self-consciously developing artistic expression, architecture and local history.

More sharply still, al Jubeh wrote that if the history of the region after the First World War had been different, the Palestinians may not have chosen a state in which to express their identity.

For decades, they marketed the conflict with Israel as “Arab-Israeli” and not as “Palestinian-Israeli.” The idea of a state of Palestine, he wrote, only emerged in the mid-1970s when Palestinian identity became politicized around the heavily promoted image of “a fighting nation seeking freedom.” This aspiration became the major vehicle in forming the Palestinians’ current sense of themselves.

In other words, Palestinian identity has no meaning except as a movement to deny the right of the indigenous Jewish people to their own homeland.

The Palestinians’ claim to be the rightful inheritors of the land lies at the very heart of the Western animus against Israel. It represents one of the most successful, if fiendish, propaganda achievements ever to have been pulled off — to have persuaded millions of people that this ludicrous falsehood is an unchallengeable truth.

All the malicious libels and distortions thrown at Israel by Western foes to delegitimize and destroy it rest on this historical lie. Claims that Israel is occupying another people’s land, that its actions are illegal, that it behaves with the cruelty and ruthlessness associated with colonialist invaders — all of this and more rests upon the belief that the Palestinians are the rightful inheritors of the land.

It is the foundation stone of a cause that Western liberals believe defines them as anti-colonialist defenders of the rights of indigenous peoples.

But it’s the Palestinians — and behind them the Arab and Muslim world — who are intent on colonialism and depriving the Jewish people of their rightful and historic homeland. And it is support for that ignoble cause more than any other that has destroyed the moral compass of the West.