Bolstering relations between Catholics and Jews through firsthand Israel experiences 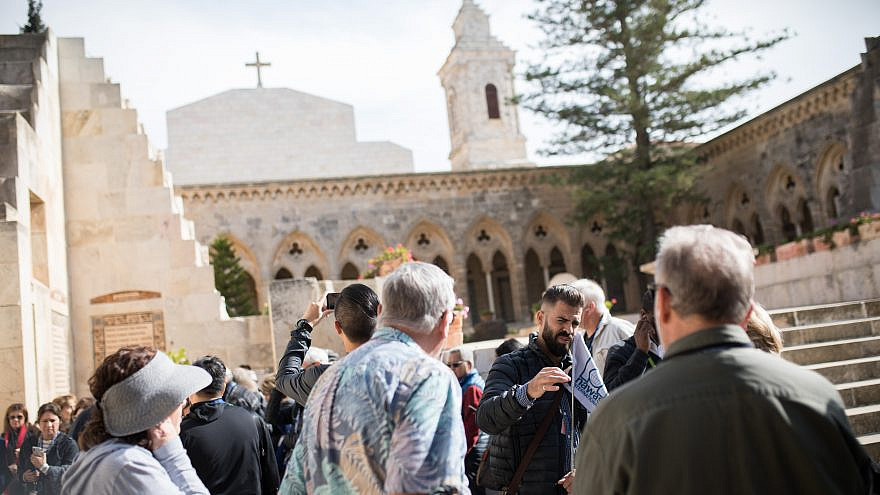 Tourists visit the Church of the Pater Noster, a Roman Catholic Church located on the Mount of Olives in Jerusalem, on Dec. 3, 2018. It is part of a Carmelite monastery, also known as the Sanctuary of the Eleona. Photo by Hadas Parush/Flash90.

(JNS) — The history of the Catholic Church and Jewish people is one marked by centuries of persecution and anti-Semitism. With Nostra Aetate in 1965, the Vatican changed its relationship with the Jewish people, including beginning historic visits to Israel by Pope John Paul II, who apologized for the Vatican’s aiding and abetting of the Nazis during the Holocaust; Benedict and Francis, who made warm relations with the Jewish people a priority. Seeking to further grow ties, a little-known organization called the Foundation Stone Institute, co-founded by White House Counsel Pat Cipollone, is working to bolster relations between Catholics and Israel.

Founded in 2016, the Foundation Stone Institute seeks “to strengthen and expand ties between Catholics and Israelis,” according to the website of the organization, whose name originates from the “ ‘foundation stone’ that tradition identifies as the place from which the world was created. For us, it represents the shared values that bind us together.”

The organization, which was founded by Cipollone; Jonathan Missner, former managing director of national affairs at the American Israel Public Affairs Committee (AIPAC); and Asher Afriat, founder and president of Israel Seminar Group, brings influential Catholics to Israel. Cipollone stepped down from the FSI board upon becoming White House counsel on Dec. 10, 2018.

Co-founder of Pro-Israel America and the managing partner of the law firm Stein Mitchell Beato & Missner LLP, Missner told JNS that he and Cipollone, an active member of the Catholic community, have a personal and professional relationship that has included traveling together to Israel multiple times, with Cipollone accompanying him to synagogue during one trip. (He said he has known Cipollone since 2013.)

And for the past four years, Cipollone has sat next to Missner at Kol Nidre at the latter’s synagogue on Yom Kippur, as he intended to do again this year.

In January 2016, the two went to a Catholic mass at Saint Peter’s in Jaffa that was entirely in Hebrew and included the Jewish blessing over wine, in addition to other prayers. They said they were both struck by the frequent overlap during one another’s services.

Missner said that Cipollone taught him “a lot about the history of Catholicism, their relationship with Jews and why Catholics love Israel.”

“He’s a Zionist. Period. Pat loves Israel” based on his devout belief in his religion and G-d, according to Missner. FSI was a perfect fit, bringing together Missner’s and Cipollone’s deep connections from their respective communities.

Considering the well-known support for Israel from evangelical Christians, said Missner, “you don’t hear as much about Catholics. Certainly, the Vatican [has] a very important relationship with Israel and the United States,” therefore, Missner and Cipollone founded FSI based on the belief that “you could do great things for the world” — a goal shared by Israelis and Catholics.

Missner remarked that the anti-Semitic history of the Catholic Church “created a reality in which many Catholics are distanced from the modern State of Israel.”

“They don’t actually fully realize the connection of Jews to the Land of Israel or know Israel’s modern achievements, so if we could bring influential Catholics to Israel on trips that are very similar to the way AIPAC and others successfully take people to Israel, then we felt like we could do great things for the world,” he continued. “Promoting global progress by connecting modern Catholics and the modern State of Israel.”

Joop Koopman of Aid to the Church in Need told JNS, “In a world of conflict, we welcome dialogue, as it’s very important. Listening is important. Mutual respect is important. Building a culture of collaboration is important — is key to creating a peaceful society.”

Israel Seminar Group organizes the itinerary for the trips, which usually consist of between 12 and 20 people. Alumni include David Alton, who serves in the House of Lords in the United Kingdom.

Missner described the trip, which has occurred about six times, as a “combination of spiritual, political, business-like, startup-nation-type activities, and how Israel has helped fix the world.” Participants, accompanied by a priest and who have mass every day, also take part in volunteering and culinary experiences. One of the places where the participants go for mass is the Church of the Holy Sepulchre in Jerusalem.

The six-day itinerary includes visits to traditional Christian cities like Nazareth and Bethlehem, and Jewish sites including the City of David. Also included is a tour of Yad Vashem in Jerusalem, Israel’s Holocaust remembrance museum, and Capernaum near Tiberias.

Pope Francis seen holding a note, which he will place in the cracks of the Western Wall in Jerusalem’s Old City, on May 26, 2014. Photo by Nati Shohat/Flash90.

Those on the trip interact with individuals from all fields — from technology and medicine to politics and journalism.

By bringing influential Catholics to the Jewish state, FSI uses what Missner called the “influence the influencer model, where if you’re only doing a certain amount of trips a year, use the force-multiplier model, the leadership model, the grasstops model. You’re taking 15 people to make it meaningful. Make sure these are 15 people who can go back and help spur real conversation.”

Missner said that “bringing influentials to Israel, because I watched it at AIPAC, works. Nothing shows what Israel is like being there.”

For example, Afriat told JNS that FSI brought a delegation of Kenyan parliament members to Israel not only to show them the land, but to introduce them to “possible technological solutions to some of the pressing problems in their districts” that relate to issues in energy, water and health.

Less than a year after the trip, Israeli technologies now work in the districts, said Afriat, who called this accomplishment “a great deliverable.”

FSI works with similar organizations, including the Philos Project.

Criticism of Christian support for Israel includes the fear that it’s to proselytize Jews.

“It’s a strange discussion when you hear people talk that way,” said Missner. “Israel is a light among nations. It’s a wonderful, amazing place in a tough neighborhood with tough challenges. If there are those who want to be supportive and help expose Israel for what they are, which is a light among nations, who am I to start talking about motivations?”

“Israel needs all the support it can get,” he added.

The next FSI trip is scheduled for later this month.

Afriat said that he asks the same question at the beginning and at the end of each trip: “What is the difference between a tourist and a pilgrim?”

“A tourist travels through the land,” he answered. “A pilgrim allows the land to travel through them.”