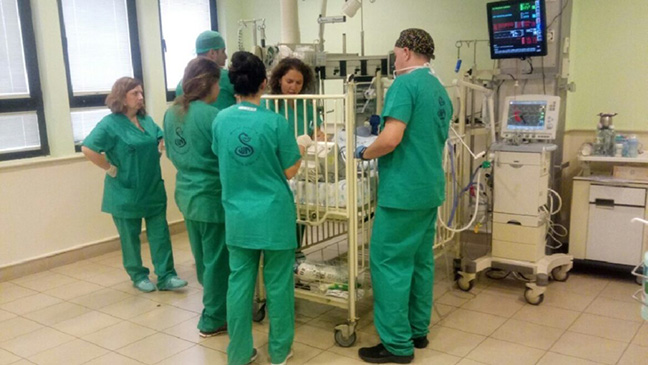 (ISRAEL21c.org) — A Kurdish refugee toddler — we’ll call him Ajwan, for security reasons – is the latest of 44 Iraqi and Syrian Kurdish children who’ve had emergency medical treatment at Israel’s Sheba Medical Center in 2019 alone.

Ajwan, three and a half, had lifesaving open-heart surgery that wasn’t available in Iraqi Kurdistan, where his family has been living for a few years due to the dangers the community faces in northern Syria.

“I was not afraid to come to Israel, even though I was warned I could lose my Syrian passport,” his mother told the local press. She’ll probably stay with Ajwan for about two weeks before he’s able to return home.

Entry visas for Ajwan and his mother, as well as the others, were expedited by the Israeli Interior Ministry in coordination with Shevet Achim, a Christian Zionist organization based in Jerusalem.

“Since 2003, several hundred Kurdish children have been brought over,” says Director Jonathan Miles. “I go into these places and get to know the people, something Israeli citizens cannot do.”

Through word of mouth, he finds children in need of Israeli medical care and coordinates with doctors on both sides.

The children are flown in through Jordan and treated at Sheba in Ramat Gan, or at Hadassah-Hebrew University Medical Center in Jerusalem.

“Israeli hospitals give significant discounts, even below cost, to help save the lives of these children,” Miles tells ISRAEL21c.

Remaining costs are covered through Shevet Achim’s partnerships with other NGOs around the world, and the families of the patients contribute whatever they can.

‘They’re coming all the time’

Mishali tells ISRAEL21c he has treated close to 100 Kurdish patients so far. The youngest was a couple of weeks old and the oldest 16 or 17 years old.

“They are coming all the time. They are taken care of like regular patients; we make no distinction between them and our Israeli and the Palestinian patients,” says Mishali. “When I go to the [operating] theater I rarely think about the origin of the child or where they come from.”

Two volunteer translators help Mishali and his team of nurses, physicians and surgeons communicate in a chain from Hebrew to Arabic to Kurdish.

Mishali and his staff also are in daily contact with the young patients’ primary-care or referring doctors at home. They communicate in English via phone, WhatsApp and/or email.

“This is very important because these doctors know the situation of each patient and can tell me, for example, that this patient can come in two years for the second stage of treatment, but this patient won’t ever be able to come back and needs the full correction at once.”

In making treatment decisions, the Israeli doctors also must take into consideration the level of follow-up medical care available in the home country.

“We usually have several treatment options and have to choose the best considering all the factors,” explains Mishali. “Some children need surgery that requires anticoagulation drugs afterward under strict medical monitoring. If that will not be possible, we have to compromise and find the best solution for these special circumstances.”

Volunteers from Shevet Achim take the Kurdish parents to see significant sites in Jerusalem and Tel Aviv while they are in the country.

“Our volunteers, predominantly Christians, want to build bridges between Israel and its neighbors,” says Miles.