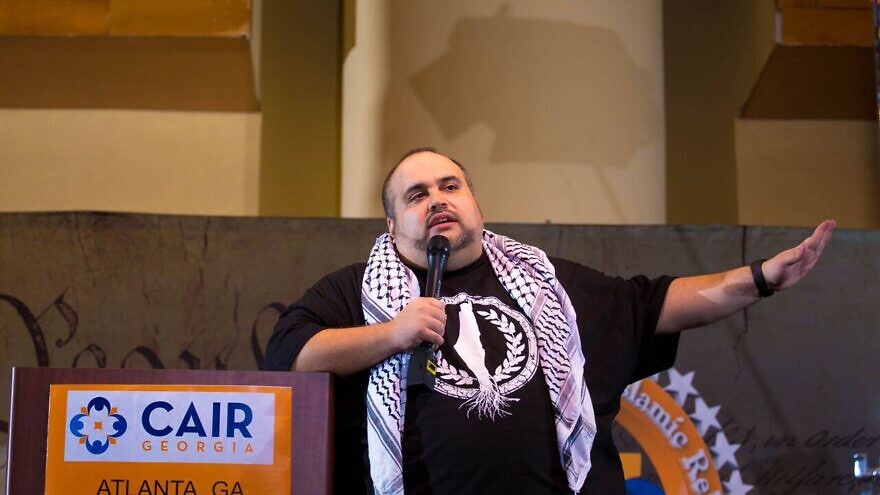 (JNS) — The watchdog group Stopantisemitism.org is calling on the U.S. Department of Education and Georgie State University to keep the “terror-affiliated” Council on American-Islamic Relations off U.S. college campuses.

“The Council on American-Islamic Relations (CAIR), an American front group for the terrorist organizations such as Hamas and Muslim Brotherhoods, is infiltrating the U.S. education system,” said the petition, which already has nearly 2,000 signatures. “Their anti-American agenda is infecting school curriculums, poisoning the minds of our students and our future leaders with Islamist propaganda, anti-Semitism, and anti-American bias. CAIR Georgia is one of the many groups driving these anti-American and anti-Semitic campaigns.”

The appeal by StopAntisemitism.org was launched in response to the CAIR chapter in Georgia, urging GSU to end its relationship with the project Georgia International Law Enforcement Exchange due to its partnership with Israel.

Liora Rez, director of Stopantisemitism.org, talked to JNS about CAIR’s “infiltration” on college campuses, saying: “CAIR is constantly inserting the Palestinian/Israeli conflict into the center of every issue from veganism to law-enforcement exchange programs such as GILEE. Their constant targeting of Israel, and calls for violence and the dismantlement of the State of Israel, creates a dangerous environment of anti-Semitism on campuses across the country in which Jewish students are being targeted and bullied.”

According to the Anti-Defamation League, CAIR has “a long record of anti-Israel activity. Its leadership has accused Israel of being a racist state engaged in genocide and Israel supporters in the U.S. of promoting ‘a culture of hostility towards Islam.’ Its chapters partner with various anti-Israel groups that seek to isolate and demonize the Jewish state.”

In 2007, federal prosecutors named CAIR an unindicted co-conspirator in a criminal conspiracy to financially support the terrorist group Hamas as part of the Holy Land Foundation case. In 2009, the FBI severed relations with CAIR because of concerns of its continued ties with terrorist groups such as Hamas and Hezbollah. At least seven CAIR board members or staff have been banned from the United States, arrested, indicted, convicted or have pleaded guilty to terrorist charges.

The United Arab Emirates also designated CAIR as a terrorist entity in 2014.

Israel’s police seen as ‘leading police entity in the world’

Founded in 1992 as a joint project of GSU and local law-enforcement community, GILEE’s mission is to “enhance law enforcement executive development and international cooperation for the provision of better law enforcement services and public safety through the protection of civil rights,” according to its website. Israel is one the program’s 25 partner countries.

GILEE started as an exchange program with the Israel Police to help with security preparations ahead of the 1996 Olympics in Atlanta amid concerns about possible terrorist attacks following the one that took place at the 1992 Munich Olympics, GILEE’s founding director Robert Friedman explained to JNS. He said “Israel Police is seen as a leading police entity in the world and as such it provides a great training opportunity” for law-enforcement officials around the world.

Former Israel Police Commissioner Roni Alsheich said that “over the years, hundreds of Israel police officers have had the distinct honor to participate in GILEE delegations and exchange information and best practices in almost every law enforcement area imaginable, including counter-terrorism, forensic sciences, bomb disposal, community policing, and more recently, leadership training. These exchanges have undoubtedly increased the knowledge and professionalism on both sides, and the personal relationships between law-enforcement personnel have proven to be invaluable.”

CAIR Georgia is allegedly funding and recruiting GSU’s student government members to be the campaign surrogates for CAIR’s anti-Semitic campaign against GILEE, according to Stopantisemitism.org.

“This campaign is one of countless efforts by CAIR to implement its anti-American agenda on college campuses and legitimize anti-Semitism under the veneer of anti-Israel advocacy. College campuses should serve their students, not terror-affiliated organizations,” the petition stated.

CAIR Georgia has been led since 2016 by anti-Israel activist and Muslim American attorney Edward Ahmed Mitchell, who is also an editor of AtlantaMuslim.com. Mitchell did not respond to requests for comment regarding the petition and CAIR Georgia’s actions.

“Student initiatives should be led by students; CAIR is not a student organization,” said Rez. “[CAIR] markets itself as a Human Rights Group for Muslims when, in fact, it’s closely linked to terror groups and spreads anti-Semitism and Islamists propaganda in the U.S. We should be very vigilant about allowing organizations like CAIR to poison the minds of our kids and future leaders with their hateful agendas.”

Speaking to JNS, Friedman declined to comment on the activities of CAIR and instead highlighted the “broad-based diverse support” GILEE has received in its 28 years from global and national partners “who respect what GILEE does and appreciate the positive impact and added value we bring to professional law enforcement leadership development.”

This is not StopAntisemitism.org’s first petition against CAIR. In April, the organization called on U.S. Attorney General William Barr and Elan Carr, the U.S. Special Envoy for Monitoring and Combating Anti-Semitism, to investigate CAIR and its connections to Rep. Ilhan Omar (D-Minn.) and Rep. Rashida Tlaib (D-Mich.).

Last spring, students recruited by CAIR introduced a resolution urging GSU to withdraw its police department from the GILEE program because of the latter’s partnership with Israel. Mitchell spoke at the student government hearing on campus in support of the resolution, which ultimately failed to pass, but also accused Israeli law enforcement of exercising racial profiling against Palestinians, indefinite detention and excessive force.

The Atlanta chapter of the pro-BDS group Jewish Voice for Peace and CAIR Georgia are similarly now co-sponsoring a petition that calls on the mayor of Atlanta to “immediately halt the Atlanta Police Department’s partnership” with GILEE. The letter accuses Israel of being “human-rights violators” and said the Jewish state is “known for its police militarization and human-rights violations against Palestinians.”

It open letter continued: “We also call on the City of Atlanta to end any other partnerships it has, or might enter into, with the Israeli Defense Forces, the Israeli police and other agencies that violate human rights. The IDF and the Israeli police have a long history of subjecting Palestinian people, Jews of Color and African refugees to racist bigotry and violent brutality. Common tactics include extrajudicial killing, excessive force, racial profiling and repression of social justice movements.”

Rez noted that “this campaign is one of countless efforts by CAIR to implement its anti-Semitic and anti-American agenda on college campuses and legitimize Jew-hatred under the veneer of anti-Israel advocacy. Georgia State University has a responsibility to serve their students, not terror-affiliated organizations like CAIR.”