Meet the South Carolina politician who laid the foundation for the new U.S. policy on Israeli settlements 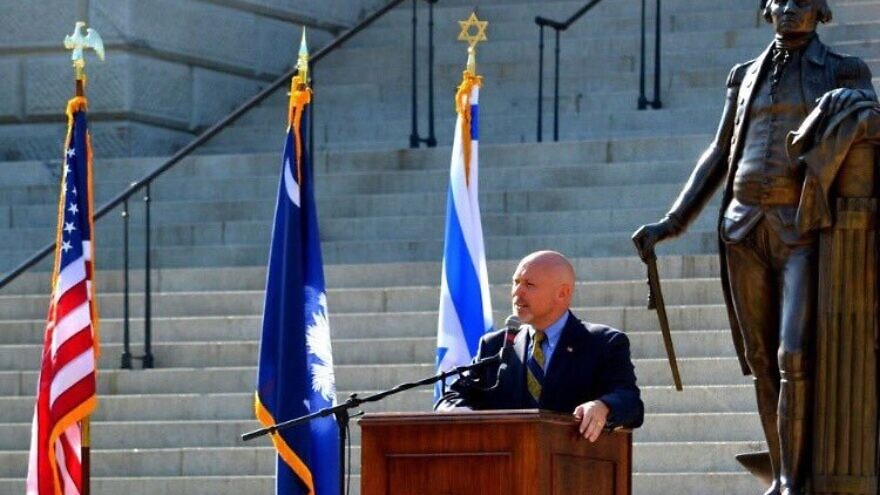 (JNS) — The announcement on Nov. 18 by U.S. Secretary of State Mike Pompeo that the United States no longer considers Israeli settlements to be in violation of international law did not happen in a vacuum.

Over the last several years, many pro-Israel organizations and political leaders on the grassroots level have sought to change the policy that considered Israel illegally occupying Judea and Samaria, also known as the West Bank. One of those politicians is Republican State Representative Alan Clemmons of South Carolina.

Clemmons, who has worked closely with pro-Israel groups such as Israeli-American Coalition for Action, has spearheaded landmark pro-Israel legislation on a state level that has been adopted by state houses across the country.

In 2011, Clemmons authored and introduced a landmark “Standing With Israel” resolution that laid out the factual and legal rejection of the accusation that Israel is an occupier in Judea and Samaria. After passing with strong bipartisan support in South Carolina, the legislation was subsequently passed in 13 additional states between 2011 and 2014.

In 2015, Clemmons also sponsored the first anti-BDS bill in the country, which has subsequently been adopted in some form by 27 states.

Not long afterwards, Clemmons became the lead author of the 2016 Republican platform plank on Israel that stated: “We reject the false notion that Israel is an occupier.”

Earlier this year, Clemmons also sponsored a resolution that passed the South Carolina House, which declared that the “common misrepresentation of the Jewish State of Israel as an occupier in the Land of Israel has become the primary anti-Semitic canard.”

Clemmons, 60, a father of two who hails from Myrtle Beach, S.C., spoke with JNS about the historic new policy stance, as well as his thoughts on the overall support for Israel and pro-Israel legislation moving forward.

Q: First, what is your reaction to the new development?

A: Secretary of State Pompeo’s announcement represents a tremendous victory for the truth. The fact is Israel is not an occupier under international law, despite the efforts of the anti-Israel community to dishonestly portray it as such.

Q: You have been involved on this issue for the past decade on both the state and national level. Could you describe your efforts?

A: In 2011, I was greatly bothered by President [Barack] Obama’s and Secretary of State [Hillary] Clinton’s repeated assertion that Israel lacked territorial legitimacy. I responded by drafting and sponsoring a resolution in South Carolina that asserted the fact that the State of Israel is not an occupier. That policy statement passed unanimously and broke new ground. In the three years following, 13 other states — encompassing a population of over 100 million Americans — passed the same resolution and sided with that legal fact.

Q: The term “occupation” has been used by many critics of Israel, from terrorist groups like Hamas, Palestinian Authority leader Mahmoud Abbas and the BDS movement to people who claim to support Israel on the left. Why is this term wrongly applied to Israel, and how does Monday’s announcement change this?

A: The casual use of the term “occupier” is nothing more than a polite way of demonizing Israel as a thief. It suggests that Jewish invaders colonized territory belonging to Arabs and which therefore must be restored to its rightful, victimized owners as a matter of justice. The term is intentionally misused against Israel in order to shape negative misperceptions of her history and legitimacy, while perpetuating a sense of Palestinian Arab victimhood. [The] announcement strikes at the heart of a monumental falsehood that has too often been used to justify terrorism and many other legal and economic attacks upon Israel.

Q: As you may have seen, most of the 2020 Democratic presidential candidates came out against the announcement. Vermont Sen. Bernie Sanders called Israeli settlements “illegal,” and both former Vice President Joe Biden and South Bend, Ind., Mayor Pete Buttigieg said that it sets back chances for peace. What is your reaction to that?

A: I believe that anyone accusing Israel of illegality or illegitimacy would be highly embarrassed if they were forced to try and substantiate such a legal claim. The shame is that these leaders are permitted to casually spread such hurtful falsehoods without being challenged by pro-Israel Democrats and groups like AIPAC.

Q: More broadly, why do you think the Republicans and Democrats have diverged on Israel? Are you hopeful that America can return to a stronger bipartisan consensus on Israel?

A: Compared with Republicans, I believe that pro-Israel Democrats and groups like AIPAC have done a very poor job of defending against the entry of anti-Israel and anti-Semitic bad actors into the mainstream of the Democratic Party. Personally, I saw the 2006 U.S. Senate race between (former Connecticut Senator) Joe Lieberman and (current Connecticut Governor) Ned Lamont as a major turning point in this disturbing trend, and the problem has steadily grown far worse since. The tolerance of anti-Semites like Reps. Ilhan Omar [D-Minn.] and Rashida Tlaib [D-Mich.] prove that the Democratic Party is in urgent need of reform. Pro-Israel Democrats and groups like AIPAC must be willing to use sticks and not just carrots.

Q: On a personal level, what has driven you to become such a stalwart support of Israel?

A: I support Israel both as a matter of personal faith in the Bible and as an expression of support for the values and freedoms that Israel represents alongside America.

Q: Moving forward, is there any additional pro-Israel legislation or efforts on a state or national level that you are working on? Will you be involved in the 2020 Republican platform?

A: Anti-Semitic incidents are growing at an alarming rate, and I was proud to lead the way in responding to this crisis by making South Carolina the first state to codify the IHRA definition of anti-Semitism. I believe many more states are likely to follow suit, and that the Republican Party will continue to take a strong stance.