Commentary: A Day of Premeditated “Rage” 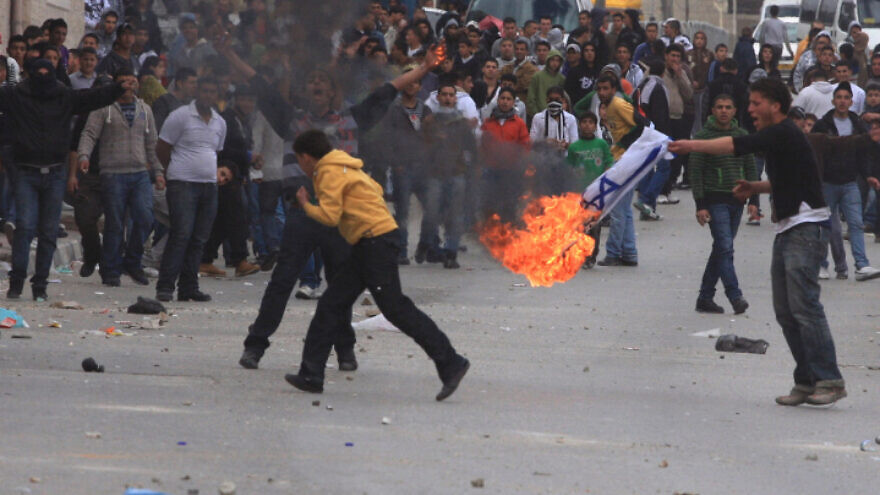 Palestinian stone-throwers burn an Israeli flag, during clashes with Israeli soldiers at Qalandiya checkpoint, near the West Bank city of Ramallah March 16, 2010. Palestinians mounted violent protests in a "day of rage" in Jerusalem on Tuesday and a U.S.-Israeli crisis over a Jewish settlement project deepened with the cancellation of a U.S. peace envoy's visit. photo by Issam Rimawi/FLASH90 *** Local Caption *** ?????? ??????? ??? ??

Palestinians burn an Israeli flag during a “day of rage” riot at Qalandiya checkpoint near Ramallah in the West Bank, March 16, 2010. Photo by Issam Rimawi/Flash90.

(Nov. 27, 2019) — If you heard about the Palestinian Authority’s premeditated “Day of Rage” this week, then it was probably “successful” from the perspective of being yet another hostile activity to protest and incite against Israel’s existence, perhaps drawing made for TV violence in which Palestinian Arab casualties draw higher ratings as Palestinian Arabs arm their young with rocks and Molotov cocktails to instigate violence from Israeli troops.

If you didn’t hear about it, the “failure” is a hopeful sign of either the boredom of their people, and/or your local media interest to cover yet another act of hostility by the Palestinian Arab national movement. Of course, the more violence and casualties the more your media will cover it, and likely report just about the “Palestinian victims.”

When I think of rage, I think of something that’s a visceral response at the moment. Rage is uncontrolled anger. I’d like to believe that one does not exist in a state of rage, violent and angry all the time so that defines them. The actual planning a “Day of Rage,” is not just premeditated, but fake. In this case, their rage is carefully choreographed. Premeditated rage is an oxymoron.

That it is premeditated however is not fake. It involves fully conscious willful intent, forethought and planning.

Announcing the “Day of Rage,” as if it were Old Timer’s Day, Bat Day, Helmet Day, or another kitschy gimmick to get people to show up to a sporting event, the PLO Executive Committee member Wasel Abu Yousef expected many to participate because all of the Palestinian (terrorist) factions agreed to participate.

Indeed, his expectation was a self-fulfilling prophesy given that the Palestinian Authority Education Ministry suspended classes in order for students to participate. There’s nothing like the three R’s for a strong education: reading, writing, and rage.

What’s all the anger about? Since U.S. Secretary of State Mike Pompeo announced the U.S. decision to revert to the Regan Administration policy that “settlements” in Judea and Samaria (the West Bank) are not by definition illegal, the Palestinian Authority and their cohort of terror groups have responded severely. “We declared a day of rage to reject this statement by the American secretary of state,” Abu Yousef ranted. “We totally condemn this American effort to legitimize the settlements.”

Considering the relative whimper among the Arab world, and even within Palestinian Arab society, the Palestinian Authority probably had to do something to stoke the coals of anger, and to remain relevant among its society. Orchestrating a “Day of Rage” is not new, and goes to a tired and used playbook that has failed them, time after time.

This week, it was reported that thousands participated in these protests, 77 of whom were injured clashing with military, many from tear gas. Did students who participated in violence with Israeli troops and got back to school late get punished, or did they get extra credit?

While any violence is bad, it seems that this week’s “Day of Rage” on Nov. 26 passed with little impact. Among millions of Palestinians Arabs in the Palestinian Authority, and even with schools, universities and government offices closed, they only were able to garner thousands. Around the rest of Judea and Samaria (West Bank), Palestinian Arabs went to work in Israeli communities (settlements) and businesses, and the day passed as if it was just another day. More Palestinian Arabs commuted to work and to go shopping and for medical care in Israel than were involved with the protests.

If you’ve heard of the “Day of Rage” this week, I’d suspect you haven’t heard of the ongoing hostilities by Turkey against the Kurds, the uprising in Lebanon with Hezbollah forces turning against Lebanese civilians, or Iran putting down social unrest with more than 100 killed. “The news” is about the seeming imbalance of the U.S. now recognizing that so called “settlements” are not by definition illegal, or that they are necessarily an obstacle to peace.

For too many decades, the false claim that these Israeli communities are an obstacle to peace has been a cornerstone of failed effort after failed effort to resolve a conflict between Israel and its Arab neighbors. Rather than being stuck in old, broken paradigms, one thing the U.S. administration does by turning back that claim is requiring any future peace negotiations to be based on reality, not on rhetoric.

The reality is the Arab and Muslim street are not protesting the “settlements,” but their own domestic failures and corruption. This should be a lesson to the Palestinian Authority, and to the students who they have hijacked from their schools. Rather than building a narrative, and their future on rage, let them learn to build it on hope. I pray for the day that thousands of Palestinians will leave school and work for a Day of Peace, or a Day of Hope.

Among the other failures of being stuck in a broken paradigm is the notion that peace can be achieved simply by returning to the pre-1967 armistice line with the required evacuation of Jewish communities. This props up the fiction that there was a Palestinian state that was “occupied” in 1967 when in fact Jordan occupied Judea and Samaria (West Bank) and Jerusalem, as Egypt occupied Gaza.

This is the case because the Arab goal to “liberate Palestine” started years before Israel controlled the areas that people now claim are occupied.

This is the case because the Land is deeded by God. But for those who don’t believe that, there’s ample legal precedent. The Jewish people’s return to the original Bible belt and legally owning property for centuries is not an occupation but a restoration.

A recent precedent, and just one example of this, is Jordan reclaiming what used to be called the Island of Peace, leased by Israel for 25 years while recognized as part of sovereign Jordanian territory. But the land itself is owned by Jews, which Jordan recognizes.

None of this is to say that there is not a conflict that needs to be resolved. No matter how recent a creation that “Palestinian” identity is, or that it is based on the narrative of an injustice due to Israel’s very existence, there needs to be a peaceful resolution.

No peace can be built on a false narrative. The failed paradigm that “settlements” are the obstacle to peace, or that peace between Israel and the Arab world is predicated on a Palestinian state is wrong. It’s time to get beyond that. The U.S. recognition of this is a positive step in that direction.

There will be peace only when Palestinian Arab students spontaneously leave their schools to demand change in their own society and reconciliation with Israel, rather than being bused from school as pawns in a chess game of terrorists whose narrative is based on lies and rage.

Jonathan Feldstein was born and educated in the U.S. and immigrated to Israel in 2004. He is married and the father of six. He is the founder and president of the Genesis 123 Foundation, of which Run for Zion is an inaugural project, and works extensively with Christian supporters of Israel.