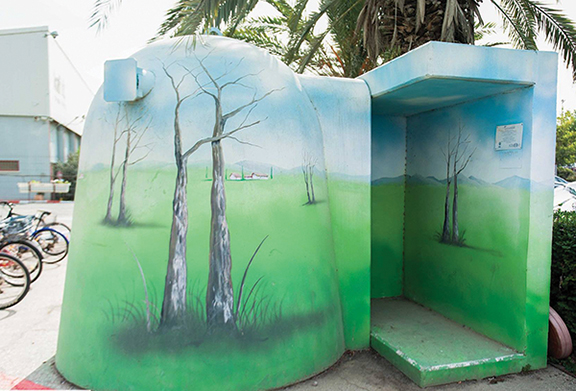 As we go about our lives with many of us living in tranquil and secure communities, it’s easy to forget the deadly threats Israeli parents and children face almost daily in the southern part of the country. Yet it is there, as a recent Jerusalem Post story painfully illustrates, that childhood, for too many Israeli children, is being shaped and scarred by constant fear of deadly rocket attacks.

Portrayed in the story is a young child so traumatized by the repeated attacks, and having only 30 seconds to get to a shelter, that she tells her mother she wants to just stay in the shelter rather than going home.

All of this, of course, reflects precisely the strategy of Israel’s insatiable terrorist adversaries: They want to make the situation “normal” so that those of us abroad, even though we care deeply about Israel and its people, become immune to this horrific reality.

These terrorists also want to make life so unbearable for these brave Israelis that they will flinch, flee and disappear. These killers may be succeeding regarding the first strategy; they haven’t succeeded when it comes to the second.

The Israeli people are among the bravest in the world. Ever since Israel’s rebirth as a modern state in 1948, and even leading up to that, the Jewish people, driven by a dream and fueled by determination, have refused to yield.

Today, there is so much at stake when it comes to Israel: the protection of Western values, thwarting the forces of radical Islam, advancing America’s strategic interests through a flourishing US-Israel relationship, and providing a haven for Jews fleeing anti-Semitism, just to mention a few examples.

But the Jewish people, tiny in number, can’t maintain a strong Israel alone. That is why support from Biblically-inspired Christians through organizations such as Christians United For Israel, the International Fellowship of Christians and Jews, the US Israel Education Association and Operation Lifeshield are so important.

We may not feel Israel’s pain and vulnerability where we live, but there is an urgency. Jews and Christians must stand arm in arm with each other, and shoulder to shoulder with these vulnerable Israeli families  — so that fearful young children can one day stop telling their parents that they’d rather live in shelters than at home.

Richard Friedman will conclude his tenure as executive director of the Birmingham Jewish Federation on Dec. 31 and join Israel InSight magazine as associate editor.