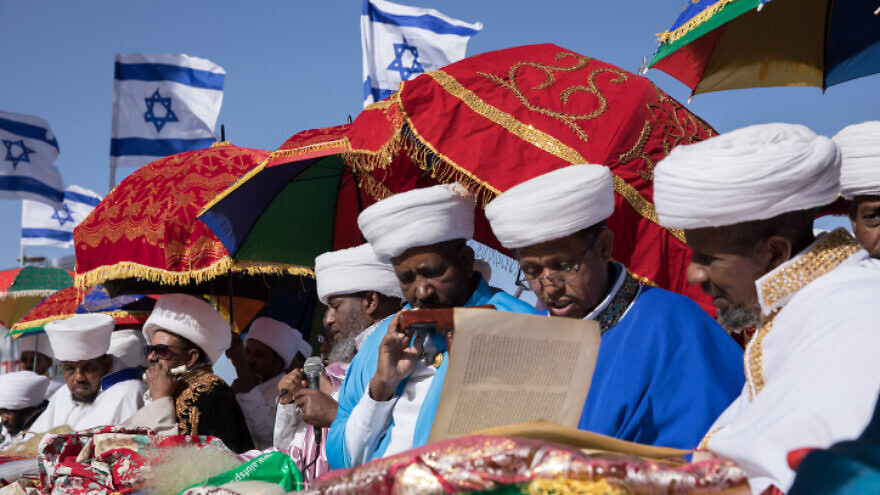 Thousands of Ethiopian Jews take part in a prayer of the Sigd holiday on the Armon Hanatziv Promenade overlooking Jerusalem on Nov. 27. JNS photo by Olivier Fitoussi/Flash90.

Israel’s Ethiopian community gathered recently to celebrate a holiday that for their ancestors was a day of yearning framed by the travail of living in exile for centuries.

It also brought back personal memories.

During their exile they would observe the Sigd, a day set aside for commemorating their lost homeland and affirming their belief that they would return. (The word sigd is broadly interpreted to mean prostration.)

Their dramatic homecoming began on an organized basis in the early 1980s through a joint effort of the Israeli government, the United States government, the Israeli-based NGO Jewish Agency, and North American Jewish Federations, including those throughout the Southern U.S.

As director of the Birmingham Jewish Federation, I remember our organization mobilizing and raising funds to help transport much of the Ethiopian Jewish population to Israel and then helping to underwrite their absorption into Israeli society. This was one of the most moving chapters of my 37-year career and included the opportunity to greet Ethiopians in Israel shortly after their arrival in the early 1990s.

Their stories were moving, filled with drama, and for some marked by danger and travail. Yet, what I remember most was their unyielding faith that one day God would bring them home to Israel and that they “just knew” the time had come when it finally arrived.

Since their arrival in Israel the Ethiopian population has grown considerably, though their absorption into the Israeli mainstream has been challenging at times culturally, educationally and economically.

Still, the return of Ethiopian Jews is one of both Judaism’s and history’s great sagas — here was an isolated Jewish community cut off from the Jewish world for centuries, but never losing faith that they would one day return to the Promised Land.

The Ethiopian community in Israel today numbers about 125,000. Many are those who came or descendants of those who came via the two main operations Jewish Federations helped finance — Operation Moses in 1984 and Operation Solomon in 1991.

Today, while the Ethiopian community in Israel continues to observe the Sigd, it also has become a national holiday. But no longer is it a day of yearning to return. Rather, it is seen more as a celebration. It is a time set aside to celebrate their return and thank God for bringing them back to their homeland just as they had prayed for centuries.

In its coverage of the celebration, the Christian Broadcasting Network, an excellent source of news about Israel, framed the current observance of the holiday this way: “Imagine God answers a very big prayer for you. Would you remember to thank him for it year after year? That’s what Ethiopian Jews do –- thank God for bringing them back to Israel and Jerusalem and for uniting them with the Jewish people.”

(Richard Friedman will conclude his career as executive director of the Birmingham Jewish Federation this year and join the staff of Israel InSight magazine as associate editor.)