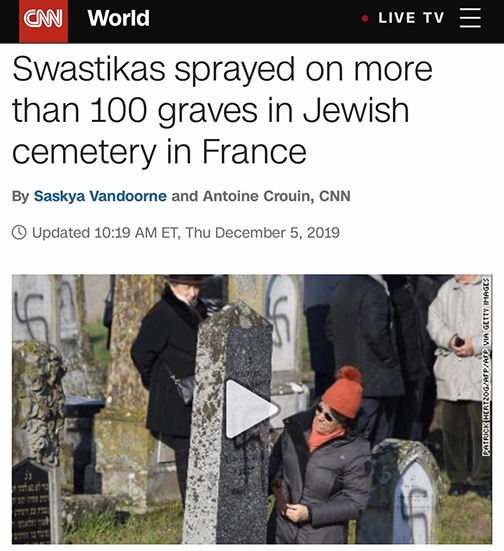 A recent CNN story headlined “Swastikas sprayed on more than 100 graves in Jewish cemetery in France” caught my eye. I emailed it to several Christian friends and shared my perspectives as a Jew.

I wrote, “About 15 years ago, I was present, as executive director of the Birmingham Jewish Federation, when then-Israeli prime minister Ariel Sharon called on the Jews of France to leave their native country and emigrate to Israel amid the anti-Semitism that was starting to take hold.”

“He was heavily criticized for being alarmist,” I noted.

“Fifteen years later, as the CNN story illustrates, the anti-Semitism in France — and many other places, including our own country — grows weekly,” I continued. “The CNN story also illustrates the importance of having a strong Israel that Jews can flee to at any time, something we didn’t have during the Holocaust.”

Thanking them for their friendship and support of the Jewish people and Israel, I concluded with this:  “As someone who lost an estimated 50 members of my extended family in the Holocaust, and whose grandparents’ graves, located in a New Jersey cemetery, were defaced with swastikas and Nazi slogans in the early 1990s, I have one thing to say to each of you as I reflect upon your devotion to Israel:  Thank you.”

One of these Christian friends responded with this moving message: “I did not realize you lost so many members of your extended family in the unspeakably horrible atrocities of the Holocaust, nor did I know of the desecration of your grandparents’ graves. It is impossible to imagine the depravity that would cause such a thing, and there are no words adequate to condemn such desecration strongly enough, nor to conceive of punishment equal to the enormity of the crime.“

This friend, a learned man and a student of history, was born in 1938, the same year that Adolph Hitler and his Nazi henchmen launched “Kristallnacht,” their infamous pogrom against the Jews. This event in November of 1938 is seen as a turning point leading up to the Holocaust which would result in the murder of 6,000,000 Jews.

I visited this friend shortly thereafter and we continued our discussion. He affirmed his admiration for Israel and its miraculous achievements, despite being a tiny country surrounded by brutal enemies, and believes it’s his Christian duty to support Israel and the Jewish people.

I felt our friendship deepening as our discussion continued.

Our email exchange and conversation reminds me again that we are living at a critical time as the Jewish people and Jewish state are constantly attacked — and how important it is that Jews and Christians maintain a steadfast partnership based on the many things that bind us together as allies.

(Richard Friedman, longtime executive director of the Birmingham Jewish Federation, will join the staff of Israel InSight magazine on Jan. 1.)