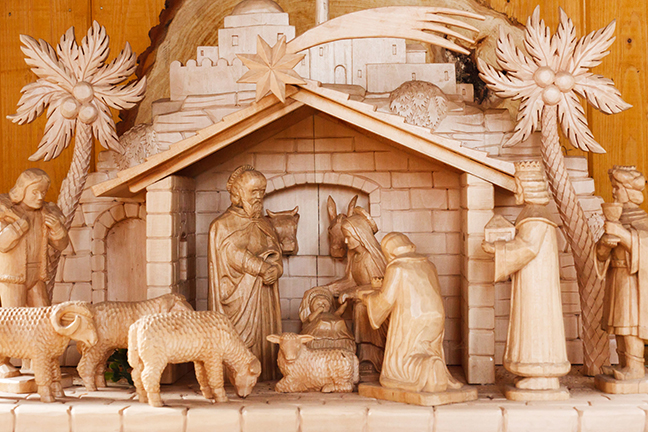 Just as sure as millions decorate trees, buy (and return) presents, and track Santa’s every move by GPS, get ready for what’s become a new vulgar Christmas tradition; propagating the delusional denial of Jesus being a Jew.

The denial of Jesus’ Jewishness gets “better” by making up the claim not only that Jesus was a Palestinian Arab, but that he was the first Palestinian. According to those who propagate this “logic,” Jews are foreign invaders, and don’t have and never have had roots in Israel. If it weren’t so ridiculous, it would actually be comical.

If it were only Palestinian Arab leaders were pushing this farce, one might overlook it. But it is gaining traction among other anti-Israel sources as yet another way to delegitimize Israel. Linda Sarsour, Rashida Tlaib and Ilhan Omar are hardly credible sources. But they are loud, and have large followings, many of whom are naïve and don’t know any better. This allows the lie of a “Palestinian Jesus” to slip into a widespread dialogue such as when the NY Times gave credence to it by publishing an op-ed in April 2019 in which the author claimed Jesus was a Palestinian.

It’s well documented that Jesus was from the tribe of Judah, and that he was born in Bethlehem, the land designated for Judah’s decedents. That’s why the area around Bethlehem is known as the Judean Mountains today, as it was called Judea then.

Why, if Jesus was born in Judea, were his parents visiting from Nazareth in the Galilee where Jesus spent most of his life. This is documented in the New Testament (Luke 2:1-7) that Joseph and Mary returned from Nazareth to Judea during Sukkot (Tabernacles) to participate in a Roman census.

When Palestinian Arab leaders make such nonsensical claims that Jesus was a Palestinian, it not only undermines any legitimacy they might have as a people with their own history and ethnicity, which is debatable as it is. Doing so is in direct contradiction with and undermines Christianity. Essentially, this Palestinian Arab narrative that’s been adopted by others toward a dishonest political agenda, hijacks Jesus.

Rome controlled all the Land of Israel at the time. All citizens of the Roman empire were subject to their laws, decrees, taxes and whims. The claim that Jesus was anything other than a Jew is specious at best, and contradicts Christian scripture and documented history. It is also a strategy employed to refute the fact that Jews are the indigenous people of Israel, and have any legitimacy here. Their mantra that Jerusalem needs to be protected from Israel “Judaizing” it is a mockery, just as in their hijacking of Jesus.

My friend David Parsons wrote about this from a Christian perspective, troubled that Jesus’ identity and Christianity itself are threatened by such lies. “At a news conference at the United Nations in 1983, (PLO leader Yasser) Arafat called Jesus ‘the first Palestinian fedayeen who carried his sword.’ When Arafat triumphantly took control of Bethlehem in December 1995, he told a throng gathered in Manger Square that he was there to liberate ‘the birthplace of our Lord the Messiah… the city of the Palestinian Jesus!’ During a visit to the Vatican a few years later, Arafat even greeted Pope John Paul II as ‘the successor of Peter, the first Palestinian pope‘.”

Of course, Arafat never met a lie he didn’t like. Yet multiple Palestinian Arab leaders have mastered the truism that if you repeat a lie often enough it becomes accepted as fact.

Further muddying the waters, as if it were open mic night at a comedy club, Palestinian Arab leader Jibril Rajoub stated “The greatest Palestinian in history since Jesus is Yasser Arafat.” Oy vey.

What’s next, that the last supper was not a Passover Seder but a Ramadan break-fast?

Even through the siege of Jerusalem and destruction of the Second Temple, Rome referred to the Land of Israel by its biblical names: provinces of Judea, Samaria and Galilee.

Claiming Jesus was a Palestinian goes hand in hand with what I term Temple Denial Syndrome: the Palestinian Arab absurdity that there was never a Temple on the Temple Mount. Despite historical and biblical reality, and despite that in 1925 the Islamic Wakf documented that their mosques do in fact sit on the site of Solomon’s Temple, that’s what they want you to believe.

Only after the Bar Kochba rebellion, in the year 132, did Rome rename Israel, as Palestina in order to underscore that Judea had been sacked, purging Jewish connection to the Land. Inconvenient to this farcical lie, Jesus had been crucified a century before.

Further documenting this, ancient Roman coins have been found with the phrase “Judea Capta,” Judea is Captured. Not ‘Palestine is captured.’ There was no Palestine, ergo Jesus is not, was not and could not have been a Palestinian. “Palestine” didn’t even exist when he lived.

The only question as to Jesus’ Jewish identity, is whether he, like his parents, were considered Judeans, or whether he was a Galilean as he is referenced. The one thing that is certain is that he was a Jew, something the Romans underscored when they crucified him, mockingly calling him King of the Jews.

Denying Jewish connections to the Land of Israel has become a Palestinian Arab national sport whose season is year-round. Though at this season, it does seem as if we are in the playoffs.

In order for there to be peace there must be truth. So, at this season of peace, let’s pray that lies like the folly that Jesus was a Palestinian are debunked and that those who propagate this lie, undermining Judaism and Christianity, turn their hearts toward truth and peace.

Jonathan Feldstein was born and educated in the U.S. and immigrated to Israel in 2004. He is married and the father of six. He is the founder and president of the Genesis 123 Foundation, of which Run for Zion is an inaugural project, and works extensively with Christian supporters of Israel. Photo courtesy Vera Kratochvil (publicdomainpictures.net).