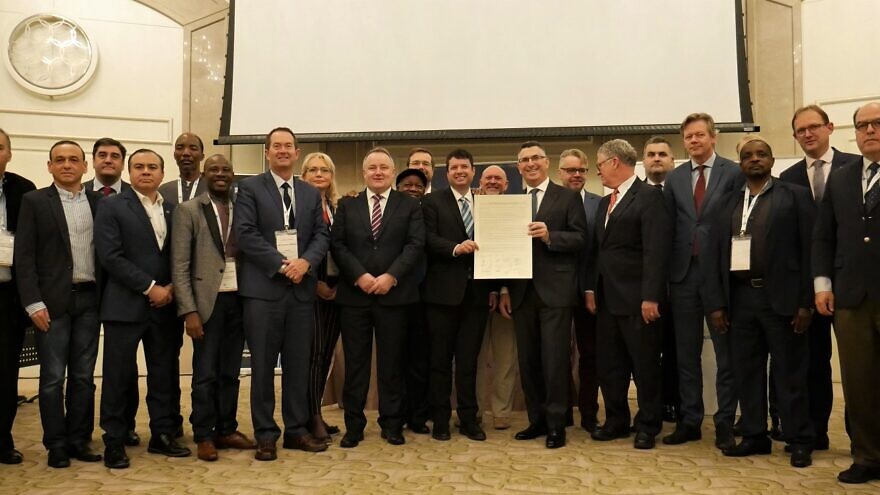 (JNS) — A total of 25 faith-based pro-Israel parliamentarians from around the world gathered in Jerusalem this week for the three-day Israel Allies Foundation annual Chairman’s Conference. The group spent time meeting with key political officials, including Israeli Prime Minister Benjamin Netanyahu, attending workshops and touring strategic areas in order to share ideas and strategies as part of their work in advancing pro-Israel legislation, combating BDS and anti-Semitism, and fighting the delegitimization of Israel in their home countries.

Much of the conference focused on combating the recent European Court of Justice ruling calling for the labeling of Jewish products from Judea and Samaria as being made in “Israeli settlements,” as opposed to “Made in Israel.”

On the first day of the event, participants toured the Barkan Industrial Zone in Samaria to understand the potential effects of that ruling firsthand — not only for Jewish companies, but for the 8,000 Arabs who work there as well.

“We have united some of the most pro-Israel parliamentarians from across the globe to stand against the anti-Semitic labeling guidelines of the European Union,” the president of the Israel Allies Foundation, Josh Reinstein, told JNS. “Just as we rallied our leadership to fight the BDS in the United States, we will do so in Europe as well.”

Reinstein said “here in this industrial zone is where real peace is being made.”

Netherlands Christian Union Party MP Joel Voordewind, whose party is a member of the government, was a stalwart in taking action on the ECJ decision. Thanks to his efforts, the Dutch parliament passed a motion last month objecting to the labeling guidelines.

He told JNS that “when the verdict came out from the European court of Justice, we quickly said we have to come up with a proposal because it’s yet another case discrimination against Israel. We explained that you can only label products coming from Judea and Samaria if you do it for all disputed/occupied areas. So we formulated the resolution and got the majority in parliament, so that’s a good sign to stop discrimination against Israel.”

Voordewind said his party also had a role in the Netherlands’ recent decision to stop funding the Palestinian Authority “because of the ‘pay for slay’ perverse bonus to the convicted terrorists.” The Dutch payments to the P.A. are slated to stop at the end of 2019.

Speaking about the role of faith in attending the conference and supporting the Jewish state, Voordewind said “it’s good to be with fellow MPs from around the world and see that we have the same goal — most of us coming from a biblical perspective and having a bond with the Jewish people. Being a follower of Jesus, Jesus coming from the Jews, we are very motivated to bless Israel and support Israel wherever we can.”

‘We Christians come from the people of Israel’

One of the headline speakers at the event was Guatemala’s president-elect Alejandro Giammattei, who was given an ovation from the audience when he reaffirmed that he would keep his country’s embassy in Jerusalem. Guatemala’s former president, Jimmy Morales, moved the embassy to the Israeli capital in 2018, taking the lead from U.S. President Donald Trump.

He said that another head of state asked him why he would keep his embassy there, and he said, “I gave him two reasons. The first is ‘faith.’ We Christians come from the people of Israel. And secondly, what Guatemala and Israel has isn’t just a friendship, but we’ve had an alliance for a long time.”

Giammattei urged the other MPs from the various countries to try to convince their governments to recognize Jerusalem as the capital of Israel as well. He ended his comments by saying that it is imperative for people of faith to stand up for Israel since it is written in the Bible that “whomever blesses Israel, receives blessing from G-d.”

Also in attendance was South Carolina State Sen. Alan Clemmons, who is well-known for initiating the first ever anti-BDS bill on a state level in the United States, which has since been adopted by 27 states, and has most recently been given credit for influencing the Trump administration’s decision to declare that communities in Judea and Samaria are not illegal under international law.

He humbly told JNS that the credit for the decision laid out by U.S. Secretary of State Mike Pompeo, belongs to the president. “I think that all the credit needs to go to President [Donald] Trump. It was he who I met with before the Republican National Convention before he was elected as president. He and his team, which included the current U.S. Ambassador to Israel David Friedman, and [Mideast special envoy] Jason Greenblatt who worked with me to develop the Israel plank of the Republican Party platform.”

Clemmons said “that plank sets forth various principles. Our president of the United States, President Donald Trump, has checked off every box on that platform, which he promised he would check off, so all of the praise goes to President Trump. And I’ve been honored to work with him in helping to bring that about.”

Some of the other “check marks” referred to by Clemmons include moving the U.S. embassy to Jerusalem and declaring that the Golan Heights belong to the State of Israel.

Other speakers at the conference included MKs Yair Lapid, Moshe Ya’alon and Gideon Sa’ar, and Jerusalem Mayor Moshe Lion, along with Professor Eugene Kontorovich, director at the Kohelet Policy Forum, and Aryeh Lightstone, chief of staff for Ambassador Friedman.

As the MPs were getting ready to pack up and head home reinvigorated to defend Israel in their capacities, an official resolution was signed and delivered to Knesset member Sa’ar, who was representing the Israeli government. It called for elected officials around the world to oppose the BDS movement, as well as policies that serve BDS ends, including the discriminatory labeling of Israeli products and all efforts to delegitimize the State of Israel.