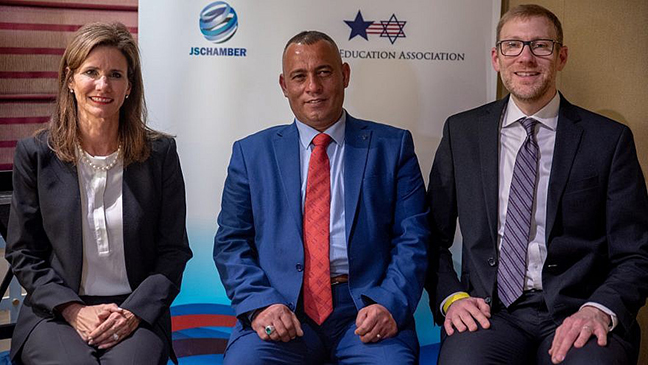 From left: Heather Johnston, founder and executive director of USIEA; Ashraf Jabari, a Palestinian business and community leader from Hebron; and Avi Zimmerman, co-founder of the JSC. Credit: Eitan Tal.

It’s rare that one miracle happens. But two at the same time is something special. And that’s what this story is about.

A few weeks ago, Israeli and Palestinian business leaders came to Capitol Hill together to promote a growing Integrated Business Initiative between their two communities, which often are seen in conflict.

More recently, the areas of Judea and Samaria have come to be known as the West Bank, and nearly 250 Palestinian and 250 Israeli West Bank businesspeople have rallied around this new integrated economic effort so they can do business together.

The driving force behind this initiative is the Judea and Samaria Chamber of Commerce and Industry. Its co-founders, Palestinian Sheikh Ashraf Jabari and Israeli Avi Zimmerman, along with another Palestinian leader associated with this initiative, were in Washington recently to brief Members of the Senate and House and key congressional staff members. The purpose of these meetings was to increase awareness and open the door to U.S. government funding for this initiative.

To see Israeli and Palestinian business leaders on Capitol Hill advancing cooperation was miraculous in and of itself. But to see Republican and Democratic Senators and House Members rally around this initiative together — in the throes of the divisiveness of impeachment — was equally miraculous.

The Birmingham-based US Israel Education Association, a small non-profit organization that is making a big impact, played an important role in the success of these recent developments. “These two West Bank business leaders – one Palestinian and one Israeli – are making history, and USIEA had the privilege of providing funding and coordination for this initiative,” said USIEA Executive Director Heather Johnston, who attended the Washington meetings.

Joan Leslie McGill, a 25-year-old USIEA staff member, who coordinated the meetings and also attended, said, “So many people in my generation are discouraged by the polarization in DC — I wish they could have been with us to see the bipartisan interest and cooperation our efforts created.”

One Washington media outlet that took notice was The Hill, a well-respected non-partisan website. In its story, which emphasized the significance of the Jabari-Zimmerman visit to Capitol Hill, it observed, “Ashraf Jabari, a Palestinian businessman from Hebron, and Avi Zimmerman, a former international spokesman for an Israeli settlement, believe their grassroots movement can promote investments in a region that has long faced violence and turbulent economic conditions amid ongoing conflict among local leaders.”

Time will tell, but certainly based on the reception these two received on Capitol Hill, momentum is building. It’s also building in Judea and Samaria as these two West Bank business leaders, with USIEA’s help, keep pushing their vision forward. As Jabari and Zimmerman co-wrote in a Jerusalem Post op-ed piece after returning from Washington: “The global business community will continue to discover that Israelis and Palestinians are investing in a more productive future, side by side, day by day, to the benefit of generations to come.”

Richard Friedman, long-time director of the Birmingham Jewish Federation, will join the staffs of Israel InSight and USIEA on Jan. 1.