Fulfilling Biblical prophecy, Jews from 150 countries moved to Israel this past decade 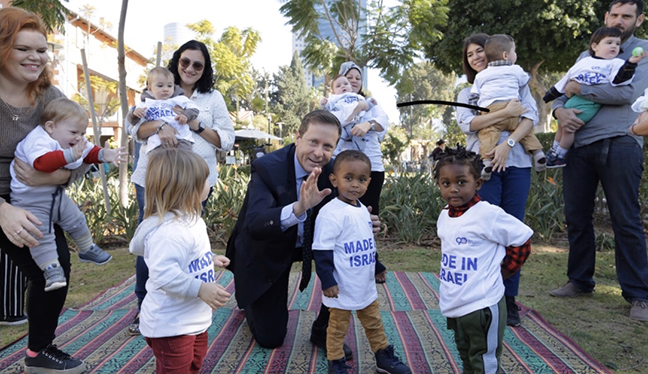 The Biblically-prophesized return of the Jewish people to their ancient homeland continues to be one of history’s most dramatic and inspiring sagas.

Upon Israel’s rebirth as a modern state in 1948 as the only country in the world with a Jewish majority, it affirmed that any Jew anywhere would be eligible for citizenship under what became known as Israel’s Law of Return.

Since that time, millions of Jews from throughout the world have immigrated to Israel, often with the help of North American Jewish Federations and organizations such as the International Fellowship of Christians and Jews.

Now, a new end-of-the-decade report highlights the amazing fact that during the past decade Jews immigrated to Israel from 150 of the world’s 195 countries. In other words, the Ingathering of the Jews and return of the Jewish people to their Biblical homeland has emanated from roughly three-fourths of the countries in the world, a breathtaking fact of Biblical proportion.

The report, issued by the Jewish Agency, an Israeli-based NGO that facilitates immigration, said 255,000 Jews arrived in Israel from 2010 to 2019 to become Israeli citizens. Descended from ancestors who were dispersed from their God-given homeland by conquerors and oppressors centuries ago, Jews in these 150 countries never abandoned their belief that one day they would return to their land of origin.

Aliyah — which means ascension in Hebrew and refers to Jews immigrating to Israel — has been the lifeblood of the Jewish state since the late 1800s, even before Israel’s rebirth as a modern Jewish country in 1948.  Jewish Federations as well as Christian organizations have helped facilitate and finance this ingathering over the decades, including assisting those who came during the past 10 years.

According to Israel21c, a website that highlighted the report, “Operation Dove’s Wings, completed in August 2013, brought around 7,800 immigrants from Ethiopia, and Operation Yemen’s Edge in March 2016 brought the Jews of Raydah to Israel at the height of the war raging in Yemen.”

The fact that Jews abroad would provide funding to assist these remote populations, and the Israeli government and Jewish Agency would deploy personnel and planes to help such Jews reach the Promised Land, reflects one of Judaism’s most sacred teachings — that all Jews are responsible for one another.

This is a religious mandate and ethical and philosophical principle that binds Jews together and unites them, even when they are dispersed among 150 different countries. To see these Jews return to Israel, a reborn and vibrant Jewish country, is one of history’s most remarkable and inspiring narratives and the affirmation of Biblical prophecy.

As it says in the Book of Isaiah:  “He shall raise a banner to the nations, and He shall gather the lost of Israel, and the scattered ones of Judah He shall gather from the four corners of the earth.”

They certainly came from the four corners of the earth these past 10 years, and hopefully as many if not more will follow in the coming decade.