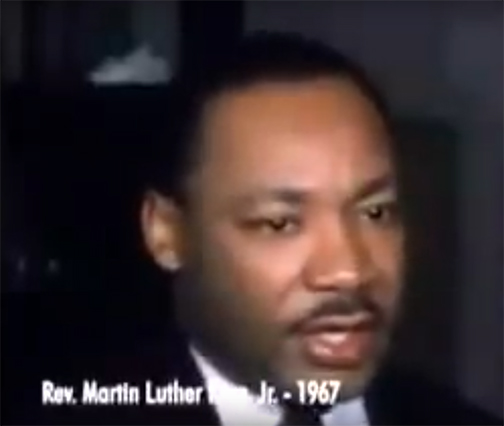 (CAMERA) — In light of the tendency by some propaganda films and anti-Israel speakers to posthumously enlist Martin Luther King, Jr., for their attacks on the Jewish state, it’s worth noting what the civil rights hero actually felt about Israel and its situation.

Those who knew King well have recalled his strong support for Israel, his understanding of the links between Israeli security and peace, and his opposition to anti-Semitism and anti-Zionism.

Rep. John Lewis, another leader in the civil rights movement, wrote an Op-Ed in 2002 describing King’s “special bond with Israel”:

During his lifetime King witnessed the birth of Israel and the continuing struggle to build a nation. He consistently reiterated his stand on the Israeli-Arab conflict, stating “Israel’s right to exist as a state in security is uncontestable.” It was no accident that King emphasized “security” in his statements on the Middle East.

On March 25, 1968, less than two weeks before his tragic death, he spoke out with clarity and directness stating, “peace for Israel means security, and we must stand with all our might to protect its right to exist, its territorial integrity. I see Israel as one of the great outposts of democracy in the world, and a marvelous example of what can be done, how desert land can be transformed into an oasis of brotherhood and democracy. Peace for Israel means security and that security must be a reality.”

During the recent U.N. Conference on Racism held in Durban, South Africa, we were all shocked by the attacks on Jews, Israel and Zionism. The United States of America stood up against these vicious attacks.

Once again, the words of King ran through my memory, “I solemnly pledge to do my utmost to uphold the fair name of the Jews — because bigotry in any form is an affront to us all.”

The Op-Ed also pointed out that King was clearly against against attacks on Zionists. Lewis wrote that “During an appearance at Harvard University shortly before his death, a student stood up and asked King to address himself to the issue of Zionism. The question was clearly hostile. King responded, ‘When people criticize Zionists they mean Jews, you are talking anti-Semitism’.” (This is not to be confused with a widely circulated hoax letter, “Letter to an anti-Zionist friend,” said to be written by King.)

Clarence B. Jones, a friend and advisor to King, likewise recalled King’s opposition to anti-Zionism. “I can say with absolute certainty that Martin abhorred anti-Semitism in all its forms, including anti-Zionism,” he explained in a 2008 Op-Ed. Jones elaborated on that point in “What Would Martin Say?,” a book he co-authored with Joel Engel. Mainstream reporters, he argues, have given a pass to anti-Semitism by black leaders like Al Sharpton because they buy the rationale that Israel’s existence is a provocation to Arabs. “Martin, for one, could see this coming after the Six-Day War in 1967, which is why he warned repeatedly that anti-Semitism would soon be disguised as anti-Zionism.”

While King would surely support better circumstances for both Israelis and Palestinians, it seems clear that he was unambiguously opposed to the Israel-bashing that counts as pro-Palestinian advocacy today. His strong statement about Israel’s right to exist suggests he recognized the centrality of this issue to the conflict. And judging by his views on anti-Zionism, he would be outraged by the idea that an avowed anti-Zionist like Omar Barghouti, who openly calls for replacing Israel with a state in which Jews will be a minority, pretends King would back boycott, divestment and sanctions against Israel.

Update: King’s colleagues in the civil rights movement were expressly opposed to the anti-Israel boycott movement and strongly supportive of Israel’s right to exist, as a letter signed by Rosa Parks, Coretta Scott King, Bayard Rustin, A. Philip Randolph, and many other black leaders makes clear.