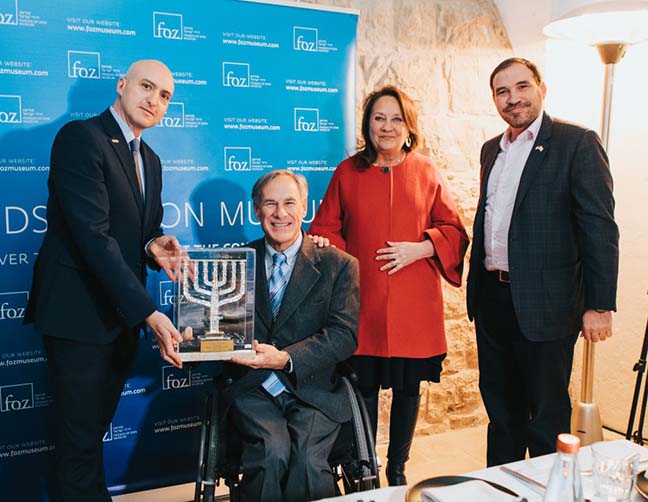 The visit was part of Abbott’s economic development trip to Israel and Switzerland.

“The spirit and resilience of the Jewish people is unlike any other and I am so proud of the deep and enduring bond our two regions share,” said Abbott. “It is a tremendous honor to receive the Friends of Zion Award and it is even more special to be able to accept it here in Jerusalem. Together, we will continue to reinforce the special connection between the people of Israel, the Jewish community, and the state of Texas to build an even stronger friendship.”

On Israel Independence Day in 2017, Abbott signed into law an anti-boycott bill limiting Texas governmental economic ties with those who boycott Israel. At the time, that made Texas the 18th state to have anti-BDS legislation. Abbott actively advocates and defends Israel on his personal social media accounts and has been to Israel twice since taking office for Texas-Israel economic trade missions.

Mike Evans, a Texan who founded the Friends of Zion Heritage Center, said “I appreciate and admire the work of my governor, Greg Abbott. His dedication to anti-BDS laws and building stronger economic ties shows that there are those in the world that are willing and proud to support the State of Israel. Governor Abbot is a true Friend of Zion and espouses the unbreakable bond between the State of Israel and the United States of America.”

Evans, a best-selling author, is also a founding member of the Trump Evangelical Faith Initiative.

Friends of Zion is also building an educational center, a think tank and an online institute. This think tank, in cooperation with other Christian think tanks from around the world, will in joint effort build a road map for decision-makers and enlighten the epicenters of politics, economy and the media for hundreds of millions.

During his visit, Abbott met with Netanyahu and with Israeli entrepreneurs in Tel Aviv. In 2018, Texas exported $953.5 million to Israel, fourth in the U.S., and imported $1.5 billion from Israel, third among states. About 60 Texas businesses have their headquarters in Israel.