Free Palestine? The Arabs used to chant that Palestine did not exist and was Zionist propaganda 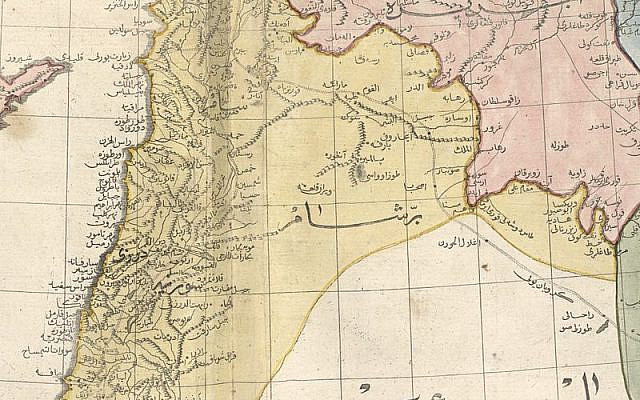 Map of Syria in the Ottoman Cedid Atlas of 1803. In Arabic, the medium sized bold text says Syria. On the bottom left it also says, Palestine. Notice that the shape of Syria is drawn as one territory extending from modern Turkey to Gaza, and there is no border line drawn on the map delineating Palestine as a separate territory. This is what the Arabs had in mind, when they claimed Palestine did not exist as a separate territory from Syria.

Students for Justice in Palestine is famous for chanting, “From the River to the Sea, Palestine Will be Free.” The chant means that Palestine should extend from the River Jordan to the Mediterranean Sea. The chant means that the borders of Israel should be removed and replaced with new borders, and that Israel should be removed and replaced with a new country. Put simply, it is a call for the removal of Israel and its replacement with a new country called Palestine.

However, before the Arabs started to chant, “From the River to the Sea, Palestine Will be Free,” they used to chant that Palestine did not exist.

It might be hard for the modern reader to understand why the Arabs would chant that Palestine does not exist, but the claim has its roots in the history of the Ottoman Empire. The empire was enormous, with the capital located in Istanbul. The territory stretched across the modern borders of Turkey, Syria, Lebanon, Jordan and Israel. At the height of the empire, the borders even continued into parts of modern Egypt, Saudi Arabia and Iraq.

During the time of the Ottoman Empire, the concept of Syria stretched from the border of Turkey all the way to Gaza; this means the older concept of Syria included the territory of modern Israel. The empire’s territory was so large that it had to be divided into smaller sections in order to be governed. The empire’s administrative divisions were called a Vilayet, the area included a province with its own governor. A Vilayet was divided into smaller sections called a Sanjak.

In 1872, Jerusalem was made into an independent administration. Jerusalem reported directly to Istanbul rather than to Damascus. The district encompassed Jerusalem, Hebron, Jaffa, Beersheba and Gaza. During the late Ottoman period, the Sanjak of Jerusalem, with the Sanjak of Akka (Acre) and the Sanjak of Nablus formed what was referred to as “Southern Syria.”

In 135 C.E., the Romans renamed the region of Judea to “Palestine,” so the name had been floating around since the time of the Romans, and sometimes southern Syria would also be called Palestine. The title was merely a reference to a general geographic region, similar to the term “Midwest,” and it had no legal borders.

After the fall of the empire, the Zionist movement sought to carve out a section of land from what had been southern Syria to create a state. Historian Daniel Pipes explains, “To start with, the very delineation of a territory called ‘Palestine’ in 1918 was a Zionist achievement; had Jews not pressed the British government to create such a unit, Arabic-speakers of the area would have continued to see themselves living in a Greater Syria or in an Arab or Muslim nation; there simply would have been no Arab feeling for Filastin.” However, the Arabs wanted to prevent the Jews from creating a state, so the Arabs tried to prevent the Jews from carving out a section of southern Syria by claiming that Palestine did not exist as a separate territory from Syria.

In 1919, Musa Kazim Al-Husseini, the head of the Jerusalem Town Council, stated, “We demand no separation from Syria.” With the goal of a united Syria and Jerusalem in one country, a group called The Arab Club was formed. Hajj Amin al-Husseini was the president of the club and later he would go onto become the Grand Mufti of Jerusalem.

Pipes outlines the objectives of the Arab Club in his book, “Greater Syria: The History of an Ambition.” Again, since southern Syria was also sometimes called Palestine, they wanted to prevent southern Syria from being separated from northern Syria: meaning they wanted to prevent the creation of Palestine as a recognized legal entity. Instead, they wanted Syria to remain one country that stretched from the Taurus mountain range in southern Turkey all the way to Rafa in Gaza.

In 1919, the Arab Club sent a letter to the British military governor of Jerusalem stating that Syria was a single unit extending from the Taurus mountains in southern Turkey all the way to Rafa in Gaza. The Arabs also expressed their willingness to die to prevent the creation of Palestine. Their letter read, “Southern Syria forms a part of the United Syria beginning from Taurus (and extending to) Rafa, the separation of which we do not tolerate under any circumstances, and we are as well pre­pared to sacrifice ourselves towards its de­fense.”

Starting in 1918, the Arab Club used to chant, “Unity, Unity, From The Taurus (Mountains) to Rafa (Gaza), Unity, Unity.” The chant meant that Syria extended from the bottom of the border of modern Turkey all the way to Gaza. Basically, the Arab Club was like the earlier version of Students for Justice in Palestine, except they chanted that Palestine did not exist.

Students for Justice in Palestine chant: “From the River to the Sea, Palestine Will be Free!”

The Arab Club used to chant the idea: “From Turkey to Gaza, Palestine Does Not Exist!”

In 1936, a new group was formed, called The Arab Higher Committee. During the same period, the British sent Lord Peel to investigate the possibility of dividing the land, creating independent Jewish and Arab States. The Peel Commission met with the general secretary of the Arab Higher Committee, Awni Abd al-Hadi, who testified, “There is no such country as Palestine. ‘Palestine’ is a term the Zionists invented. There is no Palestine in the Bible. Our country was for centuries part of Syria. ‘Palestine’ is alien to us. It is the Zionists who introduced it.” Put simply, the representative for the Arab Higher Committee declared that the idea of a nation of Palestine was created by Zionist propaganda.

Just let that sink in: At one point, the Arab leaders told the British government that Palestine was created by Zionist propaganda. After Israel was created, then the Arabs switched tactics to claim that Palestine had always existed as a separate territory, but it had always belonged to the Palestinians. Thus, the international community had no right to give it to the Jews.

The Palestinians are a unique group of people in that they shift the claim of what land belongs to them to match whatever shape of land belongs to the Jews. Hence, why the modern chant, “From the River to the Sea, Palestine will be Free,” was copied from an earlier Arab chant that said “Unity, Unity, From The Taurus to Rafa, Unity, Unity.” Both chants have the same goal – to destroy the Jewish State.

Daniel Swindell is a Zionist. He has a B.A. in Philosophy from the University of Missouri, and has studied in Yeshiva. This piece was originally posted on Times of Israel and is reprinted with the author’s permission.