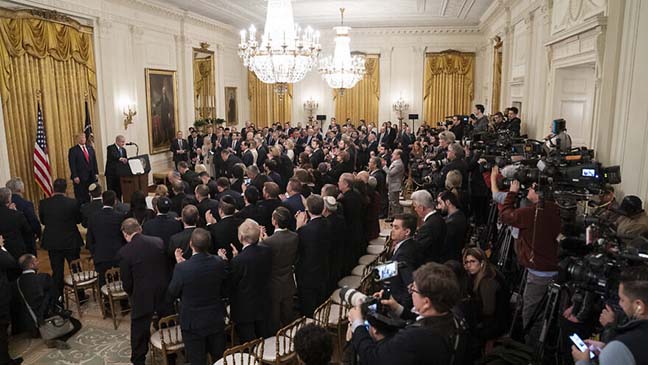 (JNS) — Today we are a little more than one week from U.S. President Donald Trump’s presentation of his “Vision for Peace.”

In that week, people have proclaimed him and his team anything and everything from the Messiah to Judas. The truth is he and his team are neither. President Donald Trump, his adviser Jared Kushner and U.S. Ambassador to Israel David Friedman are loyal U.S. patriots and the greatest friends Israel has ever had in the White House.

Let’s remember where we were as recently as December 2016. We were abandoned at the United Nations, and the terms of a U.N./E.U.-style peace plan were dictated to us by then-U.S. Secretary of State John Kerry. That was certainly a low point in international relations for our great state of Israel.

Since then, however, the Kinneret (the Sea of Galilee) has nearly filled up (we haven’t figured out how to thank Trump/Kushner/Friedman for that yet, but if we could, we would.) We have become energy independent, in no small part because of our partnership with an American company, Noble Energy of Texas, in a deal brokered with Jordan and Egypt that could not have been possible without the tireless assistance of the United States.

The president and his team recognized Jerusalem as the capital of Israel, moved their embassy there, got out of the Iran deal, recognized Israeli sovereignty over the Golan Heights, stopped funding The United Nations Relief and Works Agency for Palestine Refugees in the Near East, declared settlements were not illegal, etc., etc., etc.

Then the president presented his peace plan for the region. Let’s understand what is in the vision and the importance of working in lockstep with the administration to achieve our goals.

1. Security: Unlike the terribly flawed Iran deal, this plan is not based upon hope or faith. Rather, it is based upon enhancing Israeli security control and responsibility throughout all phases of its implementation. At no time — let us repeat that, at no time — does Israel’s security posture weaken under this plan, it only strengthens. For this fact alone we should be eternally grateful to this administration, which understands that Israel is not the source of strife in the Middle East. We are the one bastion of stability and anything that hurts our stability will have a catastrophic domino effect on the entire region.

2. Jewish homes: This administration has been clear — one cannot “Judaize” Judea. Our roots and our homeland are quite literally in the name. Each and every Jewish home and their environs will eventually become part of civilian Israel. This means being able to build throughout Judea and Samaria as in Jaffa and Haifa, Tel Aviv and Bet Shemesh.

3. Jerusalem will be considered, by the greatest power on earth, the undivided and eternal capital of Israel. This has been something for which we have been yearning for literally 2,000 years.

4. Everyone is aware of the reality on the ground here: Our neighbors are not ready for peace. They may never be ready for peace. Each and every day we wake up and we pray three times a day for peace, we strive for peace — but we will not die for peace. This vision changes the entire paradigm of how the world looks at this supposed conflict. Instead of asking (demanding) that we take more risks for a peace that will probably never mature, this administration has been extremely clear that peace will come if, and only if, our neighbors make dramatic changes.

In order to achieve peace, they must demonstrate that they will stop acting like Iran and begin acting like Canada. If, and only, if they cross these hurdles (which we are highly doubtful they ever will) can we negotiate with them. To be clear: We want peace, we have always wanted peace, and this is the only vision that actually acknowledges what it will take to get peace, no matter how difficult it is to imagine occurring.

In the week since this vision has been released, most of the world has declared that this is something serious to be considered and negotiated. There are notable groups throughout Europe and Middle East among those in support of the U.S. proposal, while even more noticeable are those against: Iran, Hamas, the Palestinian Authority.

We are a cutting-edge 21st-century regional power, that is true, but we have two secret weapons. One is God and the other one is our special and unique relationship with the United States. Everyone around the world wants a piece of each. To hear people, regardless of rank and station, complain about the difference of opinion over timing for recognition is not only embarrassing, it is shameful.

This vision was presented as a vision, not a finalized plan. If our country chooses in the future to enter into negotiation based on this vision, we should not interfere.

But while the Palestinians cry hysterically, let it not be our camp that looks and sounds unhinged — let us set an example for the entire country. We the undersigned will work to get a government elected that will maximize the opportunities presented by this vision while safeguarding against those who would take this plan and use it as a platform to weaken us in every possible way.

We pray every day for peace, and know it will only come when we are strong on our own and the world sees no daylight between Israel and the United States. This vision accomplishes all of this and more. Thank you Prime Minister Benjamin Netanyahu for forging such a strong and strategic relationship with President Trump, Jared Kushner and Ambassador Friedman — the best friends we have ever had.

Oded Revivi is the mayor of Efrat.

Eli Shaviro is the mayor of Ariel

Benny Kashriel is the mayor of Ma’ale Adumim

Asaf Minter is the mayor of Elkana

Igal Lahav is the mayor of Karnei Shomron

Shy Rosenzweig is the mayor of Alfei Menashe

Nir Bartal is the mayor of Oranit