Did the Palestinians just have a rare setback at the United Nations? 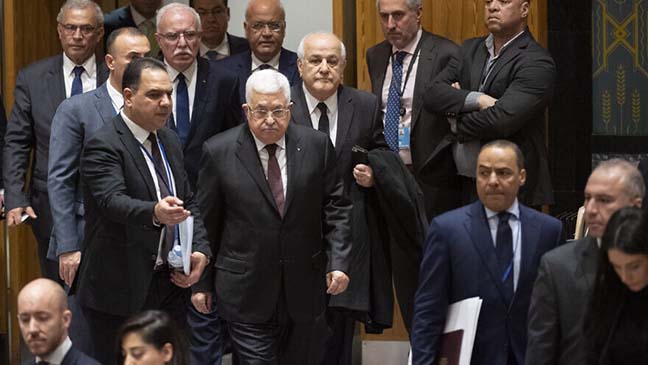 Security Council meeting The situation in the Middle East, including the Palestinian question.

(JNS) — The announcement on Feb. 10 that the Palestinians are pulling their resolution at the U.N. Security Council condemning the Trump administration’s recent Middle East peace plan appears to be a major defeat for the Palestinians, who rejected the plan before it was even presented.

“This was not so much a victory for Israel as it was a defeat for the PLO [Palestine Liberation Organization]. It shows he lacks support in the one venue the Palestinians have dominated for decades: the U.N.,” Jonathan Schanzer, vice president of research at the Foundation for Defense of Democracies, told JNS. “This is also a major victory for Trump, as it shows that some of the Arab states that previously would have voted blindly with the PLO are working to ensure that they do not spurn the president.”

The announcement of the delay of the Palestinian vote came after news that Tunisia, one of the resolution’s sponsors, had fired its ambassador to the United Nations over being too critical of the Trump administration’s plans. The Palestinian resolution reportedly did not have the support of the nine members needed for passage and would have been vetoed by the United States regardless.

Israel’s Ambassador to the United Nations Danny Danon said at a press conference that the postponement of the Palestinian resolution is “nothing to celebrate right now,” and that the real “victory or a success will be when we have real negotiations and a peace treaty signed.”

The Palestinians originally requested for an immediate vote at the Security Council for a resolution that initially condemned the recently announced Trump administration’s Mideast peace proposal before they softened its wording, but it was announced on Feb. 10 that the resolution would not be brought up for consideration at the next day’s session.

Despite delaying the vote on the resolution, Palestinian leader Mahmoud Abbas addressed the Security Council on Feb. 11, where he said that the Trump plan strengthens “the apartheid regime.”

“It legitimizes what is illegal: settlement and annexation of Palestinian land,” he said. It “rewards the occupation, instead of holding it accountable for all the crimes it perpetrated against our people and our land.”

“Believe me, if there is peace between us and the Israeli people, it will be the most beautiful form of peace, but give us this opportunity to achieve peace,” Abbas told the Security Council.

“I hope that President Trump will be just and fair, so that we can have the opportunity to reach peace,” he added.

Responding to Abbas, Danon told the Security Council that the Palestinian leader was “not serious about peace. He came here to distract from his unwillingness to negotiate.”

‘Abbas should come to Jerusalem instead of New York’

Danon views Abbas’s visit to the United Nations as unnecessary and not conducive to any progress to peace in the Middle East. He said instead of coming to New York to address the Security Council, “Abbas should come to Jerusalem, or our prime minister will come to Ramallah and meet with him there.”

Danon also called former Prime Minister Ehud Olmert’s decision to appear at a joint conference with Abbas in New York on Feb. 11, after the U.N. Security Council session, “unfortunate” and “shameful,” especially in wake of recent Palestinian attacks on Israeli civilians and soldiers. He expressed disappointment in the former prime minister, saying, “I think from our prime minister we should expect more.”

“I think he’s making a mistake,” said Danon. “I know the reactions in Israel, people are upset about it, and I’m sure the administration is upset about it.”

Danon told JNS that he has no plans to meet with Olmert when the former leader comes to the United Nations, but that others from the Israeli side have spoken to him about his stance, and he has replied that he is not attacking Israel or the new Mideast peace plan.

Schanzer said that while he views Olmert’s appearance as “inconsequential,” it also comes with some historical irony.

“It’s ironic that he is backing Abbas, given that Abbas spurned his offer more than a decade ago. And his offer was far more generous than the one Abbas is rejecting now,” he said.

‘A starting point for negotiations’

Regardless, Danon stressed that Israel is willing to negotiate the ideas laid out in the peace plan and remains “open-minded unlike the Palestinians, who immediately I don’t think even bothered to read the details of the plan before they announced that they won’t accept it.”

He called it “part of the Palestinian approach” to “always say no.”

He emphasized that new Mideast proposal can get “support and the blessing” of the entire international community, but it must lead to direct negotiations between Israel and the Palestinians for any progress to be made. He called the peace plan a “starting point for negotiations,” but said Palestinians “are not even considering it.”

Danon emphasized that Netanyahu said he is willing to negotiate with the Palestinians, and said the peace plan could be “a game-changer” for them since it includes a pledge of $50 billion in investments over 10 years for the Palestinian territories and its neighbors — Jordan, Egypt and Lebanon.

“Some in the Arab world are getting tired from the games of the Palestinians,” maintained Netanyahu. “You have to move on.”