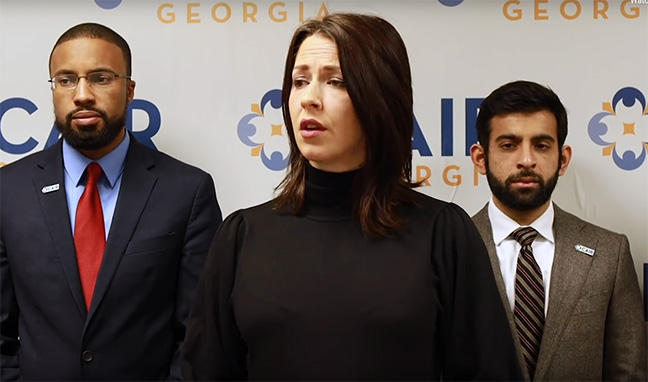 A filmmaker who engages in anti-Israel conspiracy theories has sued the state of Georgia after a planned talk at Georgia Southern University in Savannah was cancelled when she would not sign the state’s anti-BDS pledge.

Abby Martin, a former staffer with Russia Today, released the documentary “Gaza Fights for Freedom” last August, about the March of Return protests coordinated by Hamas every Friday at Gaza’s border with Israel. The film promotes support of the boycott-Israel movement.

“I will not forfeit my constitutional rights by signing this pledge,” Martin said at a news conference on Feb. 10 (above).

Martin is a Sept. 11 Truther, who claims the attack on the Twin Towers and Pentagon were an inside job. She also claims that, despite their own statements, Hamas has nothing to do with the weekly Gaza border riots where Hamas operatives are embedded in civilian groups that are used as human shields, in an effort to break through the border and “rip out the organs” of Israelis on the other side.

Instead, she accuses Israel of war crimes, claiming Israel deliberately targets the disabled, children, media members and medics during the protests. She says she looked at hundreds of hours of footage “that they gave us” and never saw any weapons or operatives along the border.

The Georgia anti-BDS law requires those doing business of more than $1,000 with state entities to pledge that they are not engaged in boycotts of Israel. She was to receive a $1,000 honorarium plus expenses to keynote an International Critical Media Literacy conference. After her refusal, the entire conference was cancelled.

Not helping the situation, the Associated Press had two major errors in their article about the suit, errors that were even picked up and repeated in Israeli media.

Contrary to the AP report, the anti-BDS law applies to contracts signed with the state of Georgia, not “in order to do business in the state.” Also, the AP piece claimed the law applies to boycotts “of the Israeli government,” when the law specifies it is about “engaging in refusals to deal with, terminating business activities with, or other actions that are intended to limit commercial relations with Israel or individuals or companies doing business in Israel or in Israeli-controlled territories,” and does not mention the Israeli government.

Most recent state anti-BDS laws have provisions that kick in when contracts are for $100,000 or more, with firms that have five or more employees — but can be ignored if there is no reasonable alternative for that good or service.

Texas recently had to revise its law when a Muslim individual who had been contracted to provide therapeutic services in schools refused to sign a pledge, and there had already been misinterpretations of the law that led some to think those receiving disaster aid had to sign a pledge.

Martin’s lawsuit is backed by the Council on American-Islamic Relations. CAIR was an unindicted conspirator in the largest terrorism funding case in U.S. history, the 2009 Holy Land Foundation trial.

She has also been the subject of “love poems” by Andrew Anglin, publisher of the neo-Nazi publication Daily Stormer. In 2018, her interview with virulently anti-Israel Max Blumenthal on “Israel’s Fascism: ‘No Hope For Change From Within’,” was immediately barred by YouTube in 28 nations.