The Business of Peace: Water for Gaza, Co-Working Jobs for Jews and Palestinians 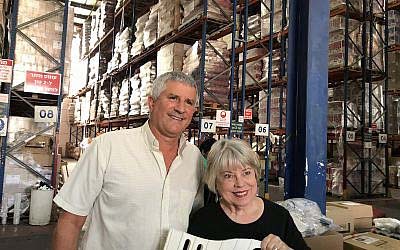 President Trump’s “Deal of the Century” has generated too many opinions to count. Politicians, media and citizens argue while the United Nations has codified its Nazi-like listing of Jewish businesses to boycott. The truth about Israeli businesses is light years away from the UN’s lies and slander. Israel’s business community is producing peace. It’s a peace that helps both the Jewish and Palestinian communities.

Despite terror from Gaza, WaterGen has set up a pilot program of fresh water in a Gaza neighborhood, Abasan al-Kabira. WaterGen’s invention, a machine that makes water from air, is jaw-dropping. I saw it myself when the company demonstrated it at an AIPAC Policy Conference several years ago. The machine, named Gen-M, was installed in a Gaza municipal building last week. It can produce at least 800 liters of water daily. Solar panels generate its energy. For the 2 million Palestinians living there, only 4 percent of their water is safe to drink. Most of Gaza’s water derives from a coastal aquifer but it’s facing shortages due to over-use and pollution. Israel has stepped in with its miraculous invention. If the project is successful, it could open the floodgates for clean water and improving health for thirsty Gazans.

WaterGen’s outreach is no easy task since Hamas has instigated almost continuous terror since 2007 when it took over after Israel evacuated every Jew from Gaza in 2005. Israeli men, women and children right next door in the Western Negev have suffered almost daily with rockets, terror tunnels, violent border demonstrations, and now a Balloon and Kite Intifada which burns Israeli crops and carries life-threatening explosives.

Yet WaterGen is clearly enacting a Jewish value. A company spokesman put it this way at last week’s Gen-M installation in Gaza: “Responding in accordance with our belief that every human being has a fundamental right to clean drinking water, we are helping some of Israel’s next-door neighbors gain access to fresh water, a resource that is lacking in Gaza.” Another positive aspect of the pilot program is WaterGen’s collaboration with Israel’s Arava Institute for Environmental Studies and the Palestinian NGO, Damour for Community Development.

Hopefully, neither Hamas nor Palestinian Jihad will instigate destruction of the Gen-M, the very machine which could make a difference. They have a history of destruction not only to Israel but to themselves. An example: after Israel decided to forcibly evacuate all 8,000 Jews out of Gaza in 2005, Palestinians destroyed the businesses that were left behind in hopes that it would generate a hopeful future for Gaza.

Most of Gaza’s population describes their coastal enclave as “the world’s largest open-air prison.” Estimates vary but Iran gives Hamas at least $100-300 million annually and in 2019 Iran pledged $30 million a month for Hamas to add increased intelligence gathering on Israel. With the humanitarian crisis so raw in Gaza, even with massive tons of aid, it’s clear that Hamas is not using Iran’s money for its population. Danny Danon, Israel’s Ambassador to the U.N., once observed, “Despite lacking food or medicine, Iran and Hamas evidently have plenty of money for terror.” The Jewish state would welcome and foster a “Singapore by the Sea.” Instead they live next to the horror of Hamas.

WaterGen is hopeful that their project is “one more step toward peace.” The hoped-for “step toward peace” remains dependent on Hamas and its willingness to release its oppressive hold on Gaza’s population and renounce violence against Israeli civilians. Until now, the Iranian surrogate has shown that it could care less about its population in its 13-year dictatorship.

Unfortunately, this holds true in Gaza.

From the WaterGen project in Gaza to Barkan Industrial Park in Samaria, other Israeli businesses are successfully shaping peaceful coexistence between Arab and Jewish workers. At the GPO’s Christian Media Summit in November 2019, I was delighted that Samaria was on our agenda and where the Lipski Company hosted us at Barkan. It’s one of 146 companies which employ many thousands of Palestinians. CEO Yehuda Cohen gave us a tour around the huge factory where plastic and sanitization products are made. Lipski has already made a significant mark for peace since 2007 in the biblical heartland. Cohen employs 60 Palestinians and 40 Israelis in managerial or regular positions. CEO Cohen explains. “The atmosphere is of one big family.”

The factory pays a good Israeli salary, more than the Palestinian Authority jobs, and supplies benefits-pension, recreation, vacations etc., to all employees. While walking around the factory we experienced an atmosphere of cooperation and hard work. Cohen commented, “The people want to live in peace. It seems that working together also brings the hearts closer, regardless of ethnic or political identity. I believe that peace will be obtained not through boycotts, but through living together.”

The deal of the century languishes with PA President Abbas declaring, “a thousand times no” to anything, but Israel’s business leaders will remain committed to the “business of peace” no matter what happens with Hamas, the Palestinian Authority or the Boycott, Divest, and Sanction movement!

And Sakharov’s quote? Israeli businesses which create coexistence are shining examples of respecting not only its Jewish citizens but its Palestinian neighbors as well.

Pro-Israel Christian Advocate Arlene Bridges Samuels has held pioneering positions for almost two decades with Israel Always, American Israel Public Affairs Committee and International Christian Embassy Jerusalem USA’s project, American Christian Leaders for Israel. Traveling to Israel since 1990, she is now an author at the Times of Israel, contributor to The Christian Broadcast Network and The Jerusalem Connection. A speaker, consultant, and networker, her articles have appeared in Philos Project, The Institute on Religion and Democracy, Southern Jewish Life, ICEJ’s Word from Jerusalem, Mercy Ships, and Concerned Women for America. She posts her devotionals, The Eclectic Evangelical, on Facebook and is an active member of a small Anglican church. After attending Winthrop University in her home state of South Carolina, Arlene earned her Masters degree at the University of Alabama.