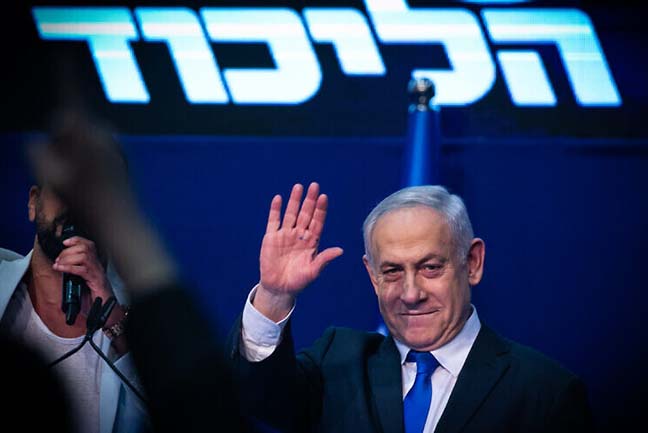 Prime Minister Benjamin Netanyahu and his wife Sara addresses their supporters on the night of the Israeli elections, at the party headquarters in Tel Aviv, on March 3, 2020. Photo by Olivier Fitoussi/Flash90

Prime Minister Benjamin Netanyahu and his wife Sara addresses their supporters on the night of the Israeli elections, at the party headquarters in Tel Aviv, on March 3, 2020. Photo by Olivier Fitoussi/Flash90

(JNS) — It took Israeli politics nearly a year to get back to square one.

That’s the basic fact to understand about the third round of general voting held within a year. While Prime Minister Benjamin Netanyahu is right to claim the vote as a personal victory, it is only by comparison to his near defeat last September that it can be viewed as a great triumph. Israel’s crazy political system may have exhausted and infuriated its citizens, but the three contests held in this period changed very little about the way the country is governed.

As was the case before the first vote, Netanyahu is still the country’s most popular politician, though arguments can be made that no one under indictment should stay in power, even if the charges against him are questionable. And yet, a critical mass of Israeli voters doesn’t agree, let alone buy the claim that Netanyahu is a threat to democracy or the rule of law. Though it shouldn’t have taken three elections to clarify that point, when Netanyahu goes, it will be either of his own volition (something that he doesn’t seem to contemplate in the foreseeable future) or because the judicial system takes him down. As long as his fate is in the hands of the voters, he will remain prime minister.

The other main conclusion concerns policy, and it is one that many commentators are ignoring. Though the rest of the world, including some of those running for president of the United States, still advocates for Israel to make dangerous concessions to the Palestinians for peace, the vast majority of Israelis have more or less stopped discussing the issue. Even if many Americans refuse to accept reality, a broad consensus on the lack of a peace partner encompasses not only Netanyahu’s right-wing/religious bloc, but also the Blue and White Party, which campaigned on stands virtually identical to those of the prime minister.

These are two basic facts about the country that its foreign friends, and especially its critics, should take to heart.

The process did give birth to a new party — the Blue and White — whose sole goal was to unseat the prime minister.

At times, it seemed as if its members would succeed, despite the fact that the prime minister’s success on both the economic and diplomatic fronts rendered the arguments against him to be more about change for change’s sake than anything else. More importantly, at the start of the process, Netanyahu was being threatened with indictments on corruption charges; by the third round of elections 11 months later, he was already indicted. The first procedural elements of his trial take place beginning on March 17.

Netanyahu’s opponents underestimated him. They also misjudged the skepticism with which about half the electorate viewed the legal process used to accomplish the desires of the opposition. The effort to topple a sitting prime minister on sketchy charges that, while pointing to behavior that might be characterized as inappropriate, still falls well below the standard that ought to be required in order to unseat an elected leader never seemed credible to anyone that didn’t already despise Netanyahu.

All that the three election campaigns have accomplished is to reconfirm that Netanyahu is the country’s master politician, and Likud is still its largest party. In the meantime, we’ve also discovered that Gantz was out of his league by comparison.

While he was a fresh face last April, since then he has been exposed as something of a dud, without a competing vision or much to say at all. Blue and White may have become the new home for those who used to vote for the once-dominant Labor Party; however, Gantz’s eagerness to be portrayed as being as tough as Netanyahu on security and as eager to annex the Jordan Valley made him seem superfluous.

Netanyahu helped forge this security consensus with the assistance of Palestinian leaders who have consistently rejected peace offers. And it’s reflected in the Middle East plan recently released by the Trump administration — a plan rooted in realism about the Palestinians’ lack of desire for true peace and the unrealistic nature of efforts to force Israel to return to the 1967 lines and establish a Palestinian state that won’t recognize the legitimacy of a Jewish one, no matter where its borders are drawn.

This realism about security issues is also why the talk about Gantz and Yisrael Beiteinu leader Avigdor Lieberman joining with the remnants of Labor to form a government with the participation, either active or tacit, of the Joint Arab List was a nonstarter.

In a refutation of the “apartheid state” libel, Arab voters have the same rights as Jews and turned out to make the Joint List the third largest party in Israel. But no matter how much Gantz and Lieberman might have wanted to replace Netanyahu, they were never going to be able to justify working with parties whose ultimate goal is to eliminate the Jewish state.

Though Netanyahu and his supporters should be pleased with the election results, this isn’t a resounding mandate. His bloc will likely fall short of a majority, and he’ll need to make a deal with Gantz or defectors from the opposition to form a government to avoid a fourth election. The prime minister likely won’t have complete freedom to implement the annexation of Israeli settlements, let alone legislate immunity from the charges that hang over his head.

And though he will remain in office, Netanyahu will be finished if the judges in his trial on corruption charges find him guilty.

In the meantime, his critics need to stop talking about Netanyahu being a threat to democracy. Three elections have confirmed that Israeli voters support the prime minister and his policies, and that the only alternatives can’t beat him at the ballot box. The date for the end of the Netanyahu era will only be set by the prime minister himself or the judges at his trial, and not by his political opponents.