The mullahs call it “a blessing,” but will this virus be the fall of Iran’s regime? 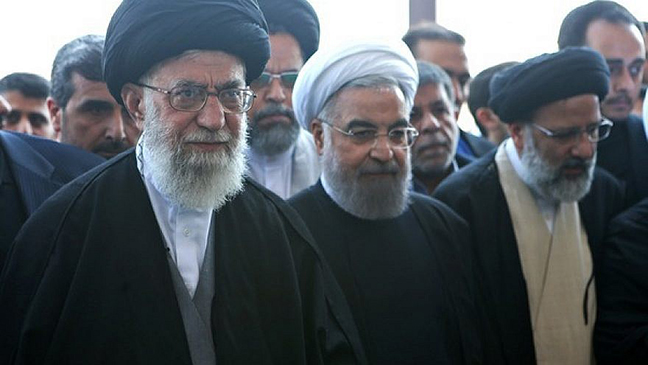 (JNS) — The point about events that catch us unawares is that we are never prepared for the unexpected to happen. Who would have thought that the entire world would suddenly be destabilized by one microbe?

It will take some time before people grasp the likely social, political and economic impact of the coronavirus pandemic. But it is already altering the landscape and knocking previous assumptions off-course.

Until a few days ago, attention in the United States was focused on whether the Democrats could find a plausible candidate to beat President Donald Trump. Now Trump’s main political opponent is the coronavirus.

In a rackety first few weeks, the administration behaved with impressive speed and resolution in banning flights from China, but then Trump unwisely minimized the severity of the corona threat. Now America has banned all flights from mainland Europe, while states of emergency over epidemic hotspots are spreading.

Trump has given the damaging impression that he’s been thrown off-guard by the virus because he can’t make a deal with it. If America goes into corona lockdown, the president stands to pay a heavy political price.

In Britain, the Chancellor of the Exchequer has just delivered a budget with an eye-watering and, in normal times, reckless increase in public spending to stave off the worst effects of the probable viral recession. In London, events are being canceled, the shops are empty, and the normally packed Tube has plenty of space even at rush hour.

In Israel, where thousands are now quarantined at home, the government took the earliest and most draconian decisions to bar flights from the most affected countries and is now quarantining all arrivals, including Israeli citizens

As a result of its proactive and uncompromising approach, Israel is in better shape at present than most. Even so, Israelis are facing up to inconvenience and worse.

Synagogues are staggering service times for small batches of congregants. Bus drivers are taped off from passengers who are being waved on board without paying. El Al, with massively reduced flights, is on the brink of bankruptcy. There is now talk of closing schools nationwide.

Relatively few in the preoccupied West, however, are taking proper notice of how this unprecedented crisis is playing out in Iran.

After China, Iran has become the second global hub of the disease. So far, even according to doctored official figures, at least 10,000 have been diagnosed with the virus, and 429 have died from it. Unofficial estimates suggest a figure of 1 million or more who have been affected, with thousands of deaths.

At the beginning, the regime concealed the truth and pretended the virus was not affecting the country. Then senior members of the regime fell ill, some of them displaying visible signs during public appearances. Five current lawmakers are known to have the virus, and two representatives elected in the parliamentary elections last month have died of the disease.

Hassan Nasrallah, the leader of the Lebanese terror organization Hezbollah, is also reported to have been infected and has been placed under quarantine along with several of his senior circle. Doubtless they were infected through their close contacts with the Iranian regime. And doubtless one reason why so many regime members have been infected is through their close relations with China.

The regime has not only failed to contain the spread of the disease but seems to have made virtually no attempt to do so. It still has no plans to quarantine the city of Qom — the principal shrine of Iranian Shia religious devotion and the epicenter of the Iranian outbreak from where the virus has massively spread.

The regime also hasn’t halted flights from Iran to other countries. And it has signally failed to provide testing for its citizens across the country.

As a result of this striking level of inaction, Iran has acted as a global virus super-spreader. And at least one Iranian commentator has suggested that the regime is doing this deliberately.

Pointing out that Supreme Leader Ayatollah Ali Khamenei recently called the virus “a blessing,” Dr. Majid Rafizadeh, president of the International American Council on the Middle East, wrote on the Gatestone Institute website: “Are the ruling mullahs attempting purposefully to spread the coronavirus to other countries as a form of global jihad?”

Those who might find this suggestion too fanciful to be believed are those who fail to fathom the regime’s depths of fanaticism and evil. Which means Britain and Europe, along with U.S. Democrats, who reacted with horror when Trump pulled America out of the Iran nuclear deal.

Whatever the president’s faults, he deserves enormous credit for doing just that. He thus restored sanctions (and a measure of sanity) against a regime that remains hell-bent on developing nuclear weapons to destroy Israel and the West — an infernal agenda the Iran deal would enable with only a few years’ delay.

This week, the International Atomic Energy Authority has reported that Iran is accelerating its production of enriched uranium and is blocking its nuclear inspectors from inspecting Iranian activities. Some analysts suggest that Iran has dramatically shrunk its theoretical “breakout” time to acquire a bomb’s worth of weapons-grade uranium to less than four months.

The regime’s failure to protect Iranians against the virus has provided a fresh outbreak of public protests. More ominous still for the regime, the people are openly mocking it. Since mockery is a sign of condign disapproval in Iran, the regime will be well aware that its already fragile hold on power over the public is slipping still further.

This all adds to the increasing pressure it has been under through the resumption of sanctions, not to mention the grievous blow it suffered from the U.S. drone killing of its principal military strategist, Gen. Qassem Soleimani.

On top of all that, having empowered the Shia from Beirut to Baghdad, the regime is now finding that these people are also turning against it. They are blaming its corruption, ineptitude and foreign adventurism for causing their many woes. In Iraq, the Shia are literally praying for the coronavirus to kill the mullahs.

This week, two Americans and one British soldier were killed after the Taji military camp hosting U.S. and U.K. troops in Iraq was hit by a rocket attack. No one has claimed responsibility, but the most plausible suspect is Iran.

If so, this suggests that the regime really is panicking. For when such fanatics feel cornered, they are likely to lash out on the basis that if they’re going down, they’ll take down with them the enemies they believe it is their Divine mission to destroy. And perhaps that’s also why it’s not fanciful to suggest that the coronavirus is “a blessing” they wish to enhance.

This microbe might just achieve what humankind has failed to do and seal the fate of the regime itself. With the pandemic predicted to reach its peak around Passover, the coronavirus may thus lay claim to becoming the 11th plague.