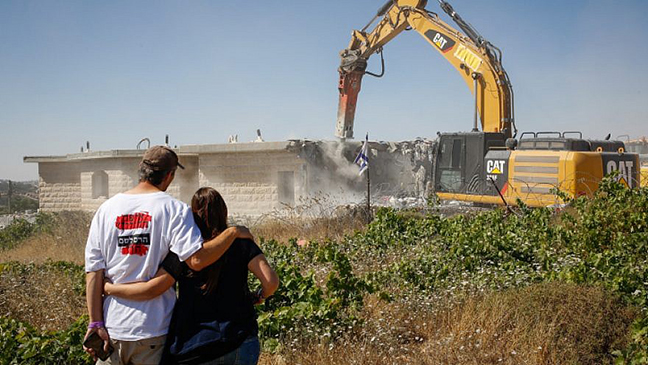 A couple views a tractor demolishing a home in the illegal Jewish neighborhood of Netiv Ha’avot in Gush Etzion, two days after residents were evicted, June 14, 2018. Photo by Gershon Elinson/Flash90.

(JNS) — Did you hear the shocking news? Sixty Congress members just signed a letter demanding that the federal government stop dismantling illegally built homes belonging to whites, though they didn’t object to the dismantling of illegal homes built by African-Americans.

Oops, wait! Sorry, I got that mixed up.

Who would have thought that in this day and age, members of Congress would stoop so low as to make policy recommendations based on the idea that one specific ethnic group should be targeted?

We were supposed to have given up the old practice of making policies based on the color of people’s skin, rather than the content of their character. Images of George Wallace standing in that schoolhouse door were supposed to be just a bad memory. Yet here we are, in 2020, with 60 Democrats signing a letter that echoes the attitudes of those dark times.

J Street played a major role in organizing the congressional letter. In a Dec. 10 press release, the group announced that “J Street supporters across the country are contacting the offices of their members of Congress and urging them to sign on to this important and timely letter.”

The letter was sent to U.S. Secretary of State Pompeo on March 16, bearing the signatures of 60 members of Congress, all Democrats. They urged the U.S. government to prevent Israel from using American-made equipment in “the ongoing home demolitions and forcible transfer of Palestinian civilians in the West Bank.”

The letter’s reference to “Palestinian civilians” indicates that J Street misled the members of Congress. Evidently, the J Streeters did not explain to potential signatories that house demolitions in Israel are not based on the race, religion or ethnicity of the homeowners.

Israeli courts authorize dismantling illegally built homes on the basis of whether the homes were built illegally. The Israeli government does not have a policy of demolishing Palestinian homes. If it did, it would be doing quite a poor job of it, since 99.9 percent of Palestinian homes are still standing!

Clearly, J Street never informed Congress whom it contacted that the Israeli government has been demolishing illegally built Jewish homes, too.

On Oct. 24, Israeli bulldozers destroyed two housing structures in the unauthorized Jewish community of Shevah Ha’aretz, near the town of Yitzhar. On Nov. 26, the government sent tractors to level a Jewish housing structure near the community of Bat Ayin and to plow over an adjacent olive grove that had been planted by Israeli Jews and their Christian Zionist supporters. On Jan. 15, the bulldozers were active in Yitzhar, destroying two more Jewish homes that were built illegally.

So why didn’t the congressional letter ask Secretary Pompeo to make sure that no American-made bulldozers were used to smash those Jewish homes?

There are two possible answers.

One would be that those members of Congress are a bunch of racists who care only about the demolition of homes owned by one ethnic group and don’t care about the ones owned by another ethnic group.

But I don’t believe that. I believe that the signatories, except for a few diehard Israel-haters such as Michigan Rep. Rashida Tlaib, are simply unaware of the reality on the ground in Judea and Samaria. They are unaware because J Street misled them. J Street led them to think that the Israeli government has a racist policy of targeting Arab houses. If J Street had fully informed these 60 congress members about the situation, then the entire premise of the anti-Israel letter would have collapsed.

Racism has no place on Capitol Hill. There should be no discrimination between houses owned by Arabs or Jews, whites or blacks, or any other racial or ethnic groups.

J Street, the so-called “pro-Israel, pro-peace” lobby, should be ashamed of itself.

Stephen M. Flatow, an attorney in New Jersey, is the father of Alisa Flatow, who was murdered in an Iranian-sponsored Palestinian terrorist attack in 1995. He is the author of “A Father’s Story: My Fight for Justice Against Iranian Terrorism,” now available on Kindle.