Is COVID-19 piece a worrisome sign of growing anti-Israel bias at Christianity Today? 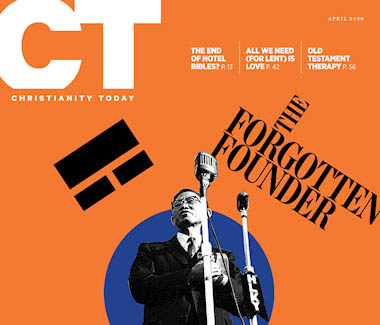 (CAMERA.org) — The Christian Leadership Network of CAMERA’s Partnership of Christians and Jews is taking the unprecedented step of asking people to contact the well-known magazine, Christianity Today, about an article it published concerning the COVID19 crisis in the West Bank.

The Network is taking this step because all Christians who care about how the media covers Israel need to send a message to the editors of CT that they expect the publication to deal with issues related to Israel and the Holy Land in an honest, factual and even-handed manner.

As stated below, alarming signs have been detected that Christianity Today may be starting down the same path of anti-Israel bias already traveled by the mainline Protestant community, which was infiltrated by anti-Israel propagandists in the years after the Six Day War in 1967. This incursion culminated in mainline Protestant support of the anti-Israel Boycott, Divestment and Sanctions campaign, which continues to this day.

In response to aggressive BDS activism, publications and mission organizations associated with mainline churches have embraced a dishonest and one-sided narrative about events in Israel, the Holy Land, and the greater Middle East. One of the consequences of its alignment with the BDS movement is this community’s inability to respond effectively to the abuse of Christians in Muslim-majority countries throughout the world. This not only presents a threat to the credibility of American churches in particular, but is a strategic threat to the United States in general.

Evangelicals need to learn from the self-destructive actions of mainline Protestants and protect their churches and their country from the virus of anti-Israel activism that has rendered mainline churches impotent in the face of anti-Israel and anti-Christian forces.

The headline itself is problematic for a number of reasons. First, it singles out Israel as if it is solely responsible for the social-distancing measures imposed in the West Bank, when in fact, the Palestinian Authority has also imposed these measures on Palestinians. Even Hamas, which controls the Gaza Strip, has imposed some social-distancing measures, including the closing of mosques.

Therefore, the title demonstrates irresponsible journalism because it implies that the use of legitimate and universally accepted public health measures is an intentional “crackdown” that specifically targets Christians in Bethlehem.

Second, the headline is inaccurate because it does not actually represent the content found in the article. The Christian leaders interviewed in the story did not condemn Israel for the health measures taken, but instead spoke fearfully about the impact that COVID-19 was going to have on Christians in Bethlehem. Rather than criticizing Israel, as the title implies, they expressed reasonable and legitimate fear over the virus itself.

This is not a small point, because the headline is the kind of item shared on social media where readers often only see the title and do not click on the article to read the details. The title’s implication that Israel’s “crackdown” is responsible for the woes of Bethlehem Christians, in contrast to the content of the article, which makes it clear that Bethlehem’s Christians are also impacted by decisions the PA has made, is a blatant example of how a misleading headline promotes unsubstantiated bias.

Christianity Today’s decision to single Israel out for imposing legitimate public health measures and its description of these measures as a “crackdown” is particularly troublesome in light of how the Coronavirus has been used as a pretext to promote blood libels and propaganda assaults against Israel. A relatively “soft” or oblique attack on Israel from an established and respected publication like Christianity Today gives irresponsible credence to these more virulent attacks.

CAMERA has confronted Christianity Today on Twitter about this headline and no change has been made. That’s why the Network is reaching out to request help in asking CT to change the headline to accurately represent the content of the article.

In addition to the headline, there is a problem with the story itself. With the exception of Mitri Raheb, all the Palestinian Christians quoted in the article are prominent participants in the Christ at the Checkpoint movement. Through its conferences, held every even-numbered year since 2010, CATC is a leader in the international campaign to delegitimize Israel and demonize Jewish self-defense.

Raheb himself is not an organizer of the CATC conferences, but he has been virulently hostile to the Jewish State for a long time. For further information about CATC and the animus it promotes toward Israel, please see these articles.

By relying solely on anti-Zionist Christians for commentary about the COVID-19 virus’s impact on the West Bank, Christianity Today is setting this community up as the “go-to” source for insight into what happens in the West Bank. If this practice continues, the magazine’s future coverage of issues in Israel and the Holy Land can’t help but be greatly distorted.

To counter the risk of presenting a one-sided, anti-Israel perspective, Christianity Today could have, and should in the future, interview people who are less hostile to Israel, such as Naim and Steve Khoury. (Naim Khoury was interviewed by Fox News in a recent documentary about Bethlehem.) Inclusion of a different perspective would help to insure a less biased report, to say the least.

Christianity Today’s decision to rely exclusively on anti-Israel propagandists is probably due in part to a desire to stand in solidarity with Christians who live under difficult circumstances in the Holy Land. However, by aligning itself with the “plight is right” narrative offered by anti-Zionist Christians, Christianity Today risks undermining its ability to speak the truth about the actual source of that suffering. CAMERA’s Tricia Miller has written about how Christians endanger their credibility, and the credibility of the Christian faith they seek to propagate, through uncritical relationships with Palestinian Christians who promote a fallacious anti-Israel narrative.

There are troubling signs that the article about COVID-19 in the West Bank is not a one-of-a-kind event at Christianity Today. The magazine has hired Jayson Casper, the author of a now deleted, but notorious hit piece on Israel published by Lapido Media in 2015.

In this article, Casper accused Israel of denying visas to foreign students attending a “peace studies” program at Bethlehem Bible College (the sponsor of Christ at the Checkpoint conferences). However, a close reading of Casper’s piece reveals that Bethlehem Bible College told its international students not to even apply for the visas. So in other words, Casper accused Israel of denying visas to people who didn’t even apply for them. CAMERA exposed the problems with this article in a piece published here.

Troublingly enough, Casper seems to have brought some of his bad habits with him to Christianity Today. When he reported last year on the Department of Education investigation of Duke-UNC’s Consortium for Middle East Studies, Casper made no mention — at all! — of the instigating event, which was Tamer Nafar’s anti-Semitic stage patter and song, “Mama, I Fell in Love with a Jew.” This is a blatant case of media bias through the omission of relevant material.

After emailing him, email Tricia Miller to let the Network know that you made contact.

What points to make

The article’s headline needs to be changed to accurately portray its content. Christianity Today needs to guard itself from relying solely on anti-Israel Christians for its information about events in Israel and the Holy Land. The magazine’s senior editors need to pay close attention to the work of its front-line staffers, especially Jayson Casper.

Finally, forward this article to your Christian friends and ask them to make their voices heard.

Tricia Miller is Christian research analyst for the Committee on Accuracy in Middle East Reporting in America. Dexter Van Zile is the Christian media analyst for CAMERA.