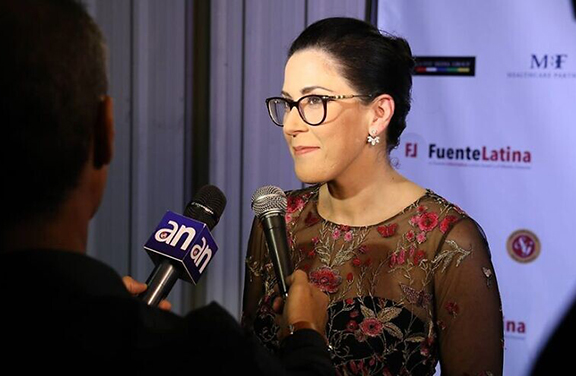 (JNS) — Anti-Semitism has often been described as a disease, and as the coronavirus continues to spread throughout the globe, anti-Semitic forces have sought to create even more infections: Jew-hatred.

According to Soibel, as the only organization of its kind, that ensures global Spanish-language media have the facts, interviews and access to decision-makers they need to accurately cover Israel, Fuente Latina works to undo the damage that anti-Israel and anti-Semitic media create.

“We are working to proactively inform media and provide them with the tools they need to report on Israel accurately,” stated Soibel, as Tehran works “against our efforts.”

While Iranians are dying from COVID-19, she told JNS, the country’s HispanTV is “spreading lies with the main narrative that Israel and the U.S. are spreading biological warfare,” and at the same time, saying that “coronavirus is an Israeli and American conspiracy.”

With HispanTV’s power and influence coming from “millions of dollars of Iranian government investing,” Soibel spends much of her time — as she did even before the outbreak of the coronavirus — fighting anti-Israel and anti-Semitic lies in Spanish-speaking media, while also finding proactive ways to disseminate the truth about Israel.

“We have to work double-time to counter their lies and fake news because the media does not realize that HispanTV is a fake news outlet, and they then republish their material as if they were legitimate,” she explained.

Even without Iranian sponsorship, Spanish media outlets tend to be negative, with Spain considered “one of the most anti-Semitic countries in Western Europe, and the media reflects that, republishing their content throughout the rest of the Spanish-speaking world,” maintained Soibel.

“We try to drive a wedge through that market,” she said, working to get honest, pro-Israel content out before Spanish outlets or the Iranian leaders do the same. When that isn’t possible, she noted, the organization provides a different perspective that is meaningful to their audience.

During the coronavirus outbreak, Soibel said, as journalists don’t have the ability to go out for stories as they used to, Fuente Latina is helping the Spanish-speaking media “tell accurate stories from their living room,” such as what Israel is doing to fight the virus.

‘A lot of ground to cover’

In a recent feat, a story about the Migal Institute of the Galilee’s efforts to create a vaccine aired throughout 50 major Spanish channels, including Univision and Telemundo, after Fuente Latina provided its vital content. It also provided information for another story that was aired on CNN about Soapy, an Israeli startup company that uses Artificial Intelligence to dispense the correct amount of soap to kill bacteria while at the same time conserving water — something crucial in the Middle East.

In the last seven years, it has brought 300 Latino journalists and influencers to Israel, and facilitated 35,000 fact-based TV, radio and print stories reaching millions of Latinos worldwide. Their work has also resulted in two TV Emmy wins.

According to Soibel, the global Hispanic media market could be a “game changer” for the Jewish state. “With Spanish as one of the most spoken languages in the world — and 60 million Hispanics in the United States, the fastest-growing minority there — you have a lot of ground to cover,” she said.

Furthermore, added Soibel, the majority of Spanish speakers “live in five states that happen to have the most electoral votes.”

“They need to understand the importance of the U.S.-Israel relationship,” she stated.

Though Latin America and Israel have historically been very close — with Latin American countries representing some of the first to vote for Israel’s independence in the United Nations in 1947 — the relationship weakened in the decades afterwards.

However, it has strengthened over the last several years, Soibel maintained, crediting the “renewed strength of relationship based on new programs, diplomacy and the evangelical Christian populations.”

‘The media is a Goliath’

Pastor Mario Bramnick, president of the Latino Coalition for Israel who has worked as a faith adviser to U.S. President Donald Trump, heads what he says is the largest pro-Israel Hispanic movement aiming to strengthen pro-Israel advocacy among the U.S. Latino community. The evangelical faith community, Bramnick told JNS, played a key role in the U.S. administration’s decision to move its embassy to Jerusalem, in addition to the reinsertion of the term “untied Jerusalem” in the drafting of Republican platform.

Also coordinating with Latin American governmental leaders, church leadership and “prophetic voices” in Latin American countries, the task force has successfully secured decisions in Latin American nations to follow the example of the United States in declaring Jerusalem the capital of Israel and in moving their embassy to Jerusalem.

As Bramnick has conferred with Fuente Latina and Soibel to fight the anti-Israel agenda of various anti-Israel news outlets, he agreed that “the media is a Goliath in all nations, including the U.S., and there has to be an answer.”