After elections, coronavirus, challenges ahead for U.S.-Israel relationship 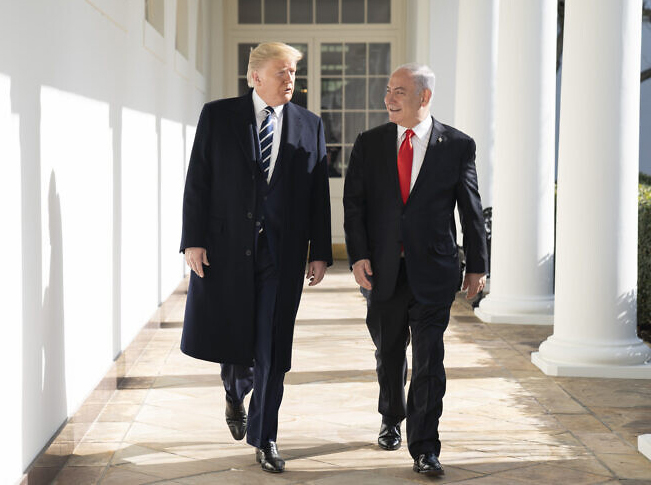 (JNS) — As the world’s attention has been focused on combating the spread of the coronavirus for the past two months, presidential primary campaign politics in the United States has been put on the backburner. Former Vice President Joe Biden has all but sealed the 2020 Democratic nomination, and has gained the endorsements of several Democratic and left-wing Jewish groups, such as J Street and the Democratic Majority for Israel. Initial polling indicates a close race this November.

Nevertheless, given the uncertainty over the coronavirus pandemic, especially as the virus has taken a heavy toll on the United States and its Jewish community, Israel’s leaders will likely need to navigate major upheavals with regard to its closest ally as its seeks to rebuild its own economy, maintain relationships with other world powers and confront enemies like Iran.

Eytan Gilboa, an expert on U.S. politics and foreign policy, and a senior research associate at the BESA Center for Strategic Studies at Bar-Ilan University, tells JNS that after either Biden or presidential incumbent Donald Trump wins the election, “we will see significant changes in the makeup of the new cabinet, and that will have a direct effect on America’s foreign policy.”

Given his decades in the U.S. Senate and years as vice president, most Israelis are familiar with Biden, a Pennsylvania native and longtime Delaware resident, who has generally enjoyed warm relations with the Jewish state and is well-regarded within the American Jewish community.

While Israel obviously prefers Trump for consecutive years of full-fledged political support, Gilboa notes that “if Biden wins, it is OK because he represents the mainstream.” He says the problem lies in who he chooses to surround himself with. “Most candidates for major positions in the cabinet would come from the Obama years,” he predicts.

On the other hand, he adds, “even if Trump is re-elected, there will be a new government and a brand-new type of administration. Israel cannot assume that because it is Trump, that everything is going to continue as before. It may need to negotiate things because there may be new people. The economy and foreign affairs will have changed.”

Eran Lerman, vice president of the Jerusalem Institute for Strategy and Security, told JNS that the fallout from the coronavirus may also affect the U.S.-Israel relationship, especially if there is a major hit on the American economy. He says foreign aid to Israel could be in danger due to the far-reaching effects of the coronavirus on the U.S. populace and economy.

“The U.S. government just authorized $2.5 trillion to be added to its already existing debt. This will place a very severe burden on future budgets,” he says.

Lerman adds that discretionary funds, a small part of the U.S. budget, “are going to be under very heavy pressure. Under normal conditions, this would work in our favor because Israel is the only country that can help drive foreign aid back into the economy,” but now that may be changing with a smaller discretionary fund.

“If things start happening to that aspect of the Israeli-American relationship, others in the region sit up and take notice,” he says. “So we are looking at a delicate situation.”

For Gilboa, the major question is whether or not Biden intends to give key positions to the more extremist branch of the Democratic Party since he would need to entice them to gain votes. “This is why he is likely to announce his selection for major positions, in addition to vice-presidential candidates,” says Gilboa.

Over the past four years, the Democratic Party has shifted to the left on many issues, Israel included. Biden’s former main challenger, Sen. Bernie Sanders (I-Vt.), questioned key parts of the U.S.-Israel alliance and could possibly have strong influence on the rest of Biden’s campaign as votes are sought from all those loyal to Sanders, especially youth. Add to that the anti-Semitic and anti-Israel rhetoric from freshmen congresswomen Reps. Ilhan Omar (D-Minn.) and Rashida Tlaib (D-Mich.), who also have openly endorsed the anti-Israel BDS movement, and some real tension could be in the cards come November.

Reverting to Obama policies ‘would spell trouble for Israel’

The main issue on the table that would most greatly affect U.S.-Israel relations if Biden wins is the possible application of annexation: Israeli sovereignty over those parts of Judea and Samaria that have a Jewish presence. Israeli Prime Minister Benjamin Netanyahu has stated his intentions to implement this plan in coordination with the Trump administration. For his part, Palestinian Authority head Mahmoud Abbas declared recently that his administration would regard agreements with Israel and the United States “completely canceled” if Israel annexed land in Judea and Samaria.

In terms of policy, Iran is the most important issue, says Gilboa. “If Trump is re-elected, Iran will need to revise its thinking about dealing with him. Iran wants to see Biden win, and if he does, they want to see a major change, such as returning to the JCPOA nuclear agreement and a lifting of sanctions, for example.”

“And Biden said he would do this,” notes Gilboa. “This would be a major blow for Israel.”

According to Gilboa, “if Biden goes back to Obama’s grand design of legitimizing Iran’s position in the Middle East, of thinking that Iran could be a partner rather than an enemy, it would spell trouble for Israel.”

The Palestinian issue is, of course, also going to continue to play a major role in the U.S.-Israel relationship, specifically focusing on Israel’s planned annexation of the Jordan Valley, in addition to some of the large settlement areas in Judea and Samaria.

Interestingly, Gilboa is not convinced that Trump will categorically back Israeli annexation of these areas, saying, “I am not so sure that Trump will support it. They established a committee to plan the borders, and usually, when you create a committee, it is because you want to bury an issue, not advance it.

“I am not so sure that this assumption that we can annex while Trump is in the White House is valid,” he surmises. “But if Biden wins, it may not be an option at all.”

“Biden may go back to Obama’s ideas,” says Gilboa, “and while every president wants to differentiate himself from the previous one, we should expect, by and large, that he would adopt a revised doctrine or policy that would improve on Obama’s strategies. It won’t be a major departure from Obama, but we will see some changes. I am sure he will not invest as much in the Israeli-Palestinian matter the way his predecessors did.”

Gilboa also notes that “in the last 12 years at least, the gap between the Republicans and Democrats vis-à-vis Israel, as well as the gap between Israel and the Democratic Party, and American Jews is a huge problem.”

He believes that there is an opportunity now, with a new Israeli government, “to open a new page between U.S. Jews and Democrats.”

“This is all interconnected,” adds Gilboa, noting the complexity of the issues. “Israel needs to fix the bipartisanship on Israel in America by having new people talking to Democrats and Republicans. This will be an opportunity to fix lingering problems in U.S.-Israel relations.”

At the same time, Lerman believes that Israel must remain “alert” and avoid “being sucked into polarization in the U.S.”

“It would be an act of folly to turn our back on the Trump administration,” he cautions, “but we must keep our channels open in all directions. Even Trump could understand that the same way he reached out to Netanyahu, and Blue and White leader Benny Gantz, [they] must reach out to him and to the people around Biden.”

Lerman also believes that with regard to the foundational aspect of the U.S.-Israel relationship, “the Chinese issue could come between us.”

Similarly, Gilboa sees the issue of the U.S. economy and China as a major factor for the U.S. election.

“If the economy is bad, it would reduce Trump’s reelection chances,” says Gilboa. “But if it is bad, most of Biden’s first term would be devoted to domestic and economic affairs. He would have no time for foreign affairs.”

When he does get around to dealing with the China issue, the question will be to what extent Biden will use the great opportunity to restore American industry. He might try to accomplish what Trump has tried to do, but in a different way.

There have been growing calls in the United States for punitive actions to be taken against China for the spread of the coronavirus, as well as investigations into China’s reported cover-up of the virus in the early days of the outbreak. Experts are calling on Israel to tread carefully in its dealings with China for both its own national security and maintaining warm ties with America.

Going forward, once the new Israeli government is put together in the following days and weeks, the main players will need to “knock their heads together,” he quips.

Lerman says leaders of the next Israeli government will need to pay “very close attention” to developments in the United States; “invest a good part of their time” in talking to all elements of the Jewish community; and “heal some of the wounds to the best of their ability while sustaining bipartisanship.” The next administration will also need to prepare for the possibility of “a reduction in the level of American interests in the region at a time of severe strains on U.S. policy.”

“At this stage,” he says, “Israel needs to work on the fundamentals—the operational dimension of the U.S.-Israel relationship, which means tending to bipartisanship and tending to our own power base that is American Jewry, trying to heal internal wounds. All of this requires a lot of work. And we need to be on our toes.”