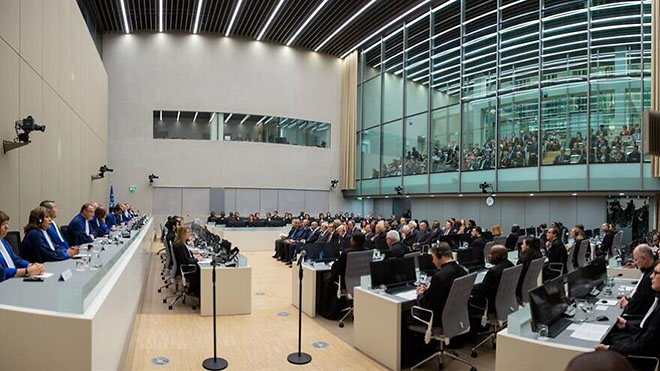 (JNS) — International Criminal Court chief prosecutor Fatou Bensouda is in the hot seat. In response to reports that her office is collaborating with anti-Israel NGOs affiliated with terror groups such as the Popular Front for the Liberation of Palestine, she tweeted, “Misinformation and smear campaigns do not change facts about the conduct of my Office’s work concerning the situation in Palestine.”

As she is currently focused on bringing false charges of war crimes against Israel, Bensouda believes that the ICC should be able to adjudicate the case, calling the accusation that she is collaborating with terror-affiliated NGOs as “misled and unfounded.” However, a recent report published by the Jerusalem Center for Public Affairs, argues that the ICC is another tool being used by the Palestine Liberation Organization and Palestinian Authority to delegitimize Israel.

According to Dan Diker, one of the authors of the JCPA report titled, “Legal Assault: How the ICC Has Been Weaponized Against the U.S. and Israel,” the case against Israel at the ICC “is a successful continuation of the PLO-PA strategy of assaulting Israel in the international community.”

Diker, a fellow at the JCPA, was referring to anti-Israel NGOs Al-Haq, Al-Dameer, Al Mezan and the Palestinian Center for Human Rights, all of which he says maintain strong ties to the designated terror organizations Hamas and the Popular Front for the Liberation of Palestine, and all of which have been working closely with the ICC to drag Israel to court over false accusations of alleged war crimes.

Bensouda decided in December 2019 that “war crimes have been or are being committed in the West Bank, including East Jerusalem, and the Gaza Strip.”

In April, she submitted a report in which she decided that “Palestine” can be considered a state over which she has jurisdiction.

The problem, according to Diker, is that her decision “makes a mockery of the whole concept of international law by violating the Rome Statute, which bases its legitimacy on complementarity.”

The ICC can claim jurisdiction when countries fail to exercise legal proceedings, including where they purport to act, but in reality, are unwilling or unable to do so.

Since Israel does have the capacity to hold its soldiers accountable and has a well-documented history of self-examination, Diker says the ICC does not have any jurisdiction to determine whether Israel’s actions since 2014 in the “West Bank, including East Jerusalem, and the Gaza Strip,” as the ICC describes it, constitute a war crime.

Since the ICC is not acting according to the Rome Statute, according to Diker, the ICC has turned into a political warfare organization.

“Many people miss this point,” he said.

‘No one is denying the accusations’

Yossi Kuperwasser, a senior intelligence and security expert, and a fellow at the JCPA where he is co-author with Diker on the report, called Bensouda’s recent April report in which she claimed to have legal jurisdiction over the question of Israel and the Palestinians “distorted.”

According to Kuperwasser, the International Federation for Human Rights (FIDH) is in cahoots with the ICC; they even acknowledge it. In addition, Bensouda paid a visit to their headquarters a few years ago, all while knowing of their terror affiliation.

“They have very close relations, and while they were upset about our report, no one is denying the accusations,” noted Kuperwasser.

For Kuperwasser, their silence means acquiescence.

In their report, Kuperwasser and Diker highlight the close ties between the people working with the ICC and the terror groups with which they are affiliated. They note that not only are Al-Haq, PCHR and Al Mezan members of FIDH, but Al-Haq’s director, Shawan Jabarin, is the secretary general of FIDH.

Moreover, they note, Raji Sourani, the general director of PCHR, is the former vice president of FIDH. Notably, Nada Kiswanson van Hooydonk was the head of Al-Haq’s office in The Hague, and Katherine Gallagher was part of the delegation that submitted the Palestinian NGOs’ opinion to the ICC prosecutor.

For this reason, Bensouda’s tweet that her office is executing its mandate with “utmost professionalism, independence and objectivity in strict conformity with the Rome Statute” has led some to question the ICC’s, as well as Bensouda’s, credibility.

Questions over ICC’s ‘objectivity and intent’

Maurice Hirsch and Itamar Marcus of Palestinian Media Watch note that the overlapping connections between the Palestinian NGOs and terror groups, and between Bensouda and FIDH, raise serious questions about the court’s objectivity and intent.

What Hirsch, Marcus, Kuperwasser and Diker are all saying is that the ICC is placing the cart before the horse. Not only has it already deemed Israel guilty of alleged war crimes, it has recognized the non-existent state of Palestine as well — all while colluding with terror-affiliated NGOs.

According to Diker, this ICC decision “is another shot across Israel’s bow to isolate Israel.”

“There is nothing legal about what the ICC is doing,” he added. “The Palestinians are an illegitimate player to the ICC and do not satisfy any of the requirements of the 1933 Montevideo Convention on sovereignty.”

Diker said that Bensouda is not acting like a professional prosecutor, but rather like “a political actress.”

“The ICC has proven it is just as biased and slanted as the United Nations,” he added.

The ICC “has become a weapon of the Palestinian leadership and these four NGOs. This is their strategy to assault and isolate Israel.”

Diker emphasized the importance of exposing the terrorist affiliations of the court, which is demonstrating “extraordinary readiness to legitimize complainants who have been proven to be affiliates of terror organizations designated [as such] by the European Union and the U.S. State Department.”

“The ICC [in this case] is an extension of the Palestinian leadership political-warfare strategy,” he said. “It is a tool of war. Period.”