Never Again? Time to hold Germany accountable for supporting out of control UNRWA 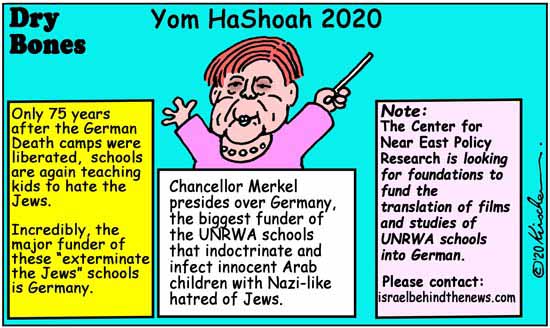 Germany, which presents itself as a democratic power, is now the leading donor state of the United Nations Relief and Works Agency, which services the Palestinian refugees of 1948 war… and their descendants.

Yet 54 percent of the current UNRWA budget is allocated to an education system which indoctrinates Arab children to make war with Jews.

The most recent tabulation of donations from UNRWA donor nations was issued on March 14, 2020. It shows that Germany contributes $170 million toward the agency’s $880 million budget — far ahead of the entire European Union, which is in second place with $132 million. Third place goes to the United Kingdom at $76 million, and one must go to fifth place to find an Arab nation, the United Arab Emirates, at just under $52 million.

As such, Germany shoulders a responsibility to assure the people of Germany and the Jewish people that their money is not channeled in a non-peaceful direction.

One of the best and simplest ways of doing that is checking the attitude of textbooks issued by the Palestine Liberation Organization, and used in UNRWA schools, toward the Israeli/Jewish “other” and to the issue of peace with that “other.”

Schoolbooks are the most revealing source of information regarding the values and aspirations a society would instill in the minds of its youngsters.

Following a protracted state of war, these texts serve as a trustable indicator of the existence, or in this case, non-existence, of peace education.

All 364 UNRWA books have now been examined by three journalists with PhDs in Islamic Studies.

It is imperative that an effort be made to provide the results of this study to the German reader in his/her own language.

The Oslo Accord signed by the State of Israel and the Palestinian Liberation Organization in 1993 opened a new phase in the Middle East in which both parties were supposed to advance toward a peaceful solution of that war.

In 1994, the Palestinian Authority was established by the PLO to rule the West Bank and the Gaza Strip which, until then, were fully administered by Israel.

The PA assumed most governmental powers in those areas, including education. In 2000 it started issuing its own schoolbooks in a process that lasted until 2006. A newer set of PA schoolbooks was published between the years 2016 and 2018.

The United Nations Relief and Works Agency for the 1948 Palestinian refugees and their descendants, which has been operating in Jerusalem, West Bank and Gaza (as well as in Jordan, Syria and Lebanon) since 1950, use the PLO books in its schools. UNRWA, as a UN agency, is bound by the UN-endorsed principle of resolving all conflict peacefully, as well as by UNESCO principles of peace education. All UN agencies should treat all member states equally, including the State of Israel.

It is imperative for the German powers that be to know whether the PLO textbooks used in UNRWA schools (as well as in all other schools in Jerusalem, West Bank and Gaza Strip) advocate peace or call for an armed struggle, recognize the existence of Israel as a sovereign state in the region and the presence of its 6 million Jews in the country as well as their holy places there, treat Jewish/Israeli individuals as ordinary human beings, renounce terrorist activity against civilians, employ self-criticism in this regard, etc.

Germany, more than any other nation, should be extra-careful while dealing with issues closely connected to the wellbeing of the citizens of the Jewish State.

A few months ago, I visited the Bundestag German Parliament, accompanied by professionals who had examined all UNRWA textbooks, and by Rabbi Abraham Cooper, the associate dean of the Simon Wiesenthal Center.

The office of German Chancellor Angela Merkel would not meet with us.

After our visit, Germany increased its funds to UNRWA, granted with no conditions.

Now we must find a way to translate all these films and studies into German.

We must return to Germany to make a high profile presentation in Berlin. We must hold German Chancellor Merkel accountable.

Remember: German instigation of the Holocaust commenced in the classroom.