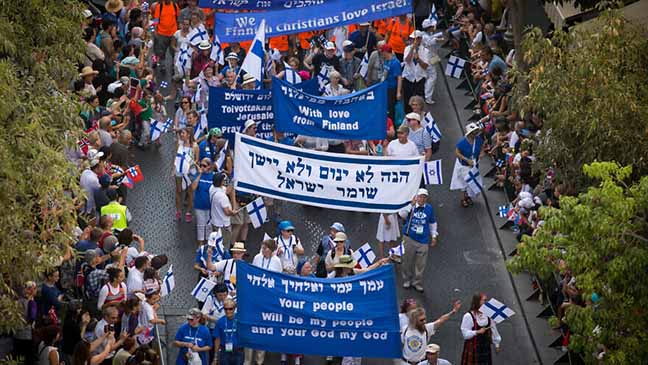 Thousands of Christian Evangelists wave their national flag alongside the Israeli one as they march in a parade in the center of Jerusalem, marking the Jewish holiday of Sukkot or the Feast of the Tabernacles. October 01, 2015. Photo by Nati Shohat/Flash90

Thousands of Christian evangelists wave their national flag alongside the Israeli one as they march in a parade in the center of Jerusalem, marking the Jewish holiday of Sukkot, the Feast of the Tabernacles. Oct. 1, 2015. Photo by Nati Shohat/Flash90.

(JNS) — On the occasion of Jerusalem Day — celebrated from May 21 to 22, and just weeks ahead of Israel’s proposed application of sovereignty in Judea and Samaria — Israel’s Christian allies took the opportunity to voice their support for a united capital of Jerusalem and for Israel’s sovereignty in the Jewish state.

In honor of the holiday, chairmen from Israel Allies Caucuses and ministers in Latin America from Uruguay, Colombia, Guatemala, Argentina and Surinam, sent a congratulatory letter to Israeli President Reuven Rivlin, which read: “On Jerusalem Day, we will celebrate not only the determination of the Jewish people to live in the eternal capital of Israel, but also the shared Judeo-Christian values that have sealed the historic relations between Latin America and Israel since November 1947, when 13 of the then 20 Latin American countries voted in favor of the creation of the State of Israel at the United Nations General Assembly.”

European parliament members and their Israel Allies Caucus chairmen also signed a similar letter, which included a pledge to continue working to support Israel. “As legislators and members from different European parliaments, we want to thank the State of Israel for their increasing cooperation, trade and approach to the region. We will continue to work in our respective parliaments to strengthen the ties between Israel and Europe,” it read.

Josh Reinstein, president of the Israel Allies Foundation, expressed his appreciation for the leadership of the caucus chairmen. “During these times of closed borders and social distancing, it is especially heart-warming to hear from the leadership of our caucuses around the world regarding their love and support for our united capital Jerusalem. Notwithstanding the physical distance between us, we will still work as one to strengthen support for Israel through faith-based diplomacy so that next Jerusalem Day many of their capitals will be in Jerusalem,” he said.

Through his work with the Israel Allies Foundation and the Knesset Christian Allies Caucus, where he has developed faith-based diplomacy that has turned into real, pro-Israel political action around the world, Reinstein said that he has seen overwhelming support for Israeli sovereignty in the Jewish state among religious Christians and evangelicals all around the world.

“They believe in the Bible, and that the covenant between God and Abraham is everlasting,” he told JNS. “They stand with modern State of Israel, where they see the fulfillment of biblical prophecy, ingathering of the exiles, a barren land blooming from desert and the nation becoming a light unto the nation through technology,” he continued. “Supporting the Jewish people in the land of Israel is not just a political issue, but a biblical issue. They see this as a religious imperative.”

The 1,000 members of parliament in the caucus network span 42 countries, noted Reinstein, and are “strong” on issues about Jerusalem as Israel’s undivided capital; the relocation of embassies to Jerusalem; recognizing sovereignty in Israel, including the Golan Heights; combating Iranian terror; and fighting BDS legislation and other anti-Zionist movements.

Bible-believing Christians all over the world, he said, are among Israel’s most important diplomatic relationships, with many supporters causing their policies to become more pro-Israel — from the United States’ Republican Party, to the Christian bloc of African countries, and to Brazil, whose President Jair Bolsonaro is a staunchly Bible-believing Christian, as are a third of all Brazilians.

“In Guatemala,” he added, “the embassy was moved to Jerusalem because of the Christian base of supporters who stand with Israel.”

‘We respect Israel as a democracy’

David Parsons, vice president of the International Christian Embassy Jerusalem, agreed, saying “Christian support for Israel has been passed like a torch among Western countries from one generation to the next since Israel’s rebirth in 1948.”

“Today, there is a new, powerful phenomenon of an expansion of pro-Israel support to Latin America, Asia and Africa,” said Parsons.

Ahead of Israel’s proposed application of sovereignty of Judea and Samaria, Parsons noted that “while there does seem to be a lot of opposition to it, Israel has a lot of Christian Zionist allies who will support Israel’s decision.”

“I believe we have a good read here in Jerusalem on how most evangelical Christian leaders worldwide feel about this issue. They believe in Israel’s solid claim and right of sovereignty to their historic homeland under international law, as well as by virtue of their biblical heritage here,” explained Parsons. “But we respect Israel as a democracy, and whatever the Israeli people ultimately decide on the annexation issue, we will stand by them.”

A “vast majority of Bible-believing Christians,” he added, “especially those who have visited Judea and Samaria, and have seen the real peace between Jews and Arabs that live there, think it’s the right thing to do and are anxiously waiting to see the area under Jewish control, as it is the heartland of Israel as it has been for 3,000 years.”