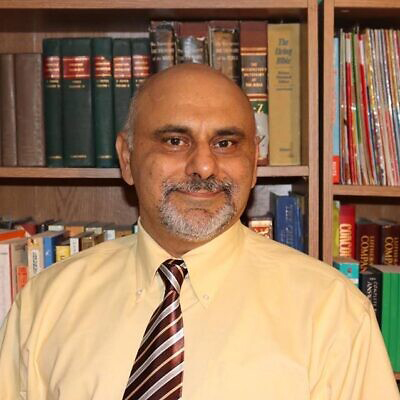 by Hesham Shehab and Benjamin Baird

Rather than acknowledge anti-black bigotry, Chicago Islamists — many of them with a history of anti-black discrimination — have minimized and excused this abhorrent behavior while exploiting Floyd’s death to satisfy their own anti-Israel agenda.

After some activists unjustly blamed a Palestinian convenience-store owner for calling the police on Floyd when he presented a counterfeit $20 bill, non-black Muslims have been forced to address the pervasive anti-black discrimination that has persisted within their communities.

This behavior is undoubtedly a cultural import from the Middle East and North Africa, where the descendants of slaves continue to experience systemic racism. In Chicago, mosques are predominantly organized along ethnocentric lines, and a decades-old feud between non-black Muslim storeowners and their African-American customers has occasionally resulted in violence.

Despite these biases, Islamists who support pro-Palestinian causes have been using the Black Lives Matter movement to demonize Israel and promote Palestinian resistance.

Headquartered in Chicago, American Muslims for Palestine is a grassroots organization the Anti-Defamation League accuses of providing a platform for anti-Semitism. Since the Floyd tragedy, AMP has advertised black justice protests and is hosting a new monthly webinar series called “Let’s Talk About BLM,” which provides a platform to black Americans who happen to agree with AMP’s anti-Jewish worldview.

Yet AMP’s newest National Development Coordinator Mohammed Habbeh has repeatedly referred to blacks as abeed, the Arabic word for “slaves.”

“Proud of my family and friends around the country stepping up and hitting the streets to fight for Black Lives and demand justice,” Habehh wrote on June 6. But in 2014, he made racist jokes about the physical appearance of Somalis. Later, he tweeted that his mother would think he had the AIDS virus if he ever dated a “black girl.”

Samer Alhato (alias Samer Owaida), a member of the anti-Israel Students for Justice in Palestine, represents the next generation of Palestinian Muslim activists in Chicago who view black oppression and the Arab-Israeli conflict as inseparably linked.

Just as Alhato calls to “abolish the police,” he urges others to “hate the notion of Israel” and defy its “right to exist.” On June 5, Alhato was invited to speak at a BLM protest in Chicago where he promoted the anti-Semitic conspiracy that “Israel trains racist police” responsible for violence against black Americans.

Not only did Alhato co-opt the black liberation movement to target Israel, but his social media is replete with shocking examples of anti-black bigotry, such as calling African-Americans monkeys and accusing them of lacking “working brain cells.”

“[H]ow come black [people] love raising the roof but can’t raise their own sons?” he asked in a 2014 tweet documented by Canary Mission, a watchdog for anti-Semitism. “Once you go black, you never get a job!” another tweet reads, this one from 2013.

If pro-Palestinian activists have been joining black justice protests in bad faith, other Chicago Islamists have been minimizing and justifying anti-black hate.

Jamal Said, imam of the Mosque Foundation in Bridgeview, Illinois, addressed the Arab-black tensions in a May 30 video message to Chicago’s Palestinian American community. He advised viewers “not to say I work with al-Abeed,” a racist slur commonly used in Muslim communities. “I know that you do not mean it,” Said added, excusing this behavior and calling it “an ugly habit.”

Nevertheless, black Palestinian actress Maryam Abu Khaled recently released a video insisting that there is nothing “harmless” about anti-black discrimination among Arabs, even when these racial slurs are “well-intentioned,” and they “do not mean it,” as Said suggested.

Intrafaith discrimination is a problem within Muslim communities as well and since Chicago is a segregated city, local mosques are divided along lines of class, race and language. Indeed, the Mosque Foundation where Said preaches caters to a mostly Palestinian congregation, and its clerics preach pro-Palestinian sermons and practice “a strict version of Islam,” according to The Chicago Tribune.

Therefore, Chicago’s black residents may have been intimidated after the Mosque Foundation mobilized private security vehicles to patrol South Chicago neighborhoods and protect Palestinian homes, mosques and businesses from looters.

“They ready to kill us if we decide to loot [their] store,” a black woman explained while recording what she claimed were three armed Muslim men standing watch over a cell-phone store on Chicago’s southside, noting that one of the men was positioned on the roof with an assault rifle.

Arab and South Asian Americans are twice as likely than the average American to hold a college degree, and they historically own many of the gas stations, convenience stores and liquor stores in Chicago.

“There are horror stories about how people in the black community are treated by our [Arab] business owners and by the security they hire,” said Hatem Abudayyeh, executive director of the Chicago-based Arab American Action Network.

Apparently inspired by the Floyd protests, AMP founder and president Hatem Bazian addressed this issue in a May 29 Facebook stream. While Bazian admitted that Arab-owned liquor stores play a destructive role in African-American neighborhoods, he blamed Arab prejudice on a “Eurocentric white supremacist worldview.”

On the contrary, Saudi Arabia, which was never colonized by the West and remains relatively free of its cultural influences, has a horrible record of discrimination against its black citizens, who according to the Center for Democracy and Human Rights in Saudi Arabia are “treated as slaves by members of the royal family and the rest of society.”

Islamists are using the Floyd tragedy to advance an intersectionalist worldview that imagines the United States and Israel as the common enemy of all oppressed people. In doing so, pro-Palestinian activists whitewash the normalization of anti-black hate within their own communities, while simultaneously paying lip service to the cause of racial justice and equality. Such transparently exploitative motives do lasting damage to the black civil-rights movement and racial reconciliation.