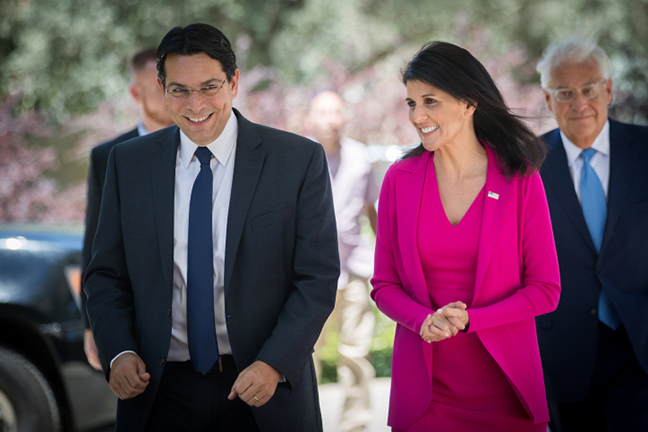 United States Ambassador to the United Nations Nikki Haley walks with Israeli Ambassador to the UN, Danny Danon as she arrives for a meeting with President Reuven Rivlin at the President's Residence in Jerusalem, June 7, 2017. Photo Yonatan Sindel/Flash90

(JNS) — Just days after returning to Israel following his five-year stint as Israel’s ambassador to the United Nations, Danny Danon spoke to JNS in an exclusive interview on his experiences in New York.

Danon touched upon key issues during his tenure, including U.S.-Israel relations and the international view of the Jewish state in the halls of the United Nations; recent efforts towards applying Israeli sovereignty over the Jordan Valley, and parts of Judea and Samaria; the ever-present Iranian threat, in addition to the actions of its proxies, Hamas and Hezbollah; Israel’s growing diplomatic relations with neighboring Arab countries and the Persian Gulf states; and the ongoing Israeli-Palestinian conflict.

JNS talked with Danon by phone on July 21. The interview has been lightly edited for brevity and clarity.

Q: How does it feel to be back in Israel after serving as Israel’s ambassador to the United Nations these past five years, especially now that we are in the midst of the global coronavirus pandemic? Also, what did you miss the most not living here?

A: It’s always good to be back in Israel, even as we are experiencing the coronavirus crisis. While New York has one of the strongest Jewish communities in the world — where we met great people and had amazing Shabbat dinners and holidays — it’s great to be back here with family and friends.

I hope that we will overcome this second wave. We must follow the guidelines so that we can celebrate the High Holidays [this fall] with our families. I’m hoping that my children can catch up with their grandparents and spend time with them now that we are back.

Q: What do you feel were your biggest accomplishments?

A: I think that in my five years I had many victories, as well as many challenges and even disappointments. But the biggest accomplishment for me, which is really a win for Israel, is the moment when I walked into the General Assembly Hall as chairman of the G.A.’s “Sixth Committee,” which deals with legal issues. This was the first time an Israeli ambassador has ever served as head of one of the U.N.’s permanent committees. It wasn’t easy to get elected — 109 countries voted for me, while 43 voted for other countries [essentially against me]. There was a lot of tension with that vote. But I’ll never forget entering the hall and chairing that first meeting.

Q: When you started your position, the Obama administration representative to the United Nations was Samantha Power. Then with the Trump administration, it was Ambassador Nikki Haley, whom some would argue was the most outspoken and supportive U.S. representative towards Israel of all time. Talk about the differences in working with the two of them.

A: For the record, we had great cooperation with the previous [Obama] administration. But it can’t be ignored how President [Barack] Obama pushed for that shameful U.N. Security Council Resolution 2334 [in December 2016] that called Israel’s presence in Jerusalem a violation of international law. For the first time ever, I had to work against the United States. For years, we had collaborated together against common rivals. But here I had to try and get support from other countries against the United States. This wasn’t easy. I was very happy when Ambassador Nikki Haley stepped in. She became a good personal friend of mine and of my family, and, of course, a true friend of the State of Israel.

Q: To follow up on that topic, are you concerned about Israel’s standing at the United Nations, if former Vice President Joe Biden wins the presidential election in November? That would almost certainly mean that current U.S. Ambassador to the United Nations Kelly Craft would be replaced.

A: It’s not our place to get involved in internal U.S. politics. We are grateful for all of the steps the Trump administration has taken, whether it’s recognizing Jerusalem as our capital and moving the embassy

[from Tel Aviv to Jerusalem]

, recognizing our rights to the Golan Heights, initiating the Trump [Mideast] peace plan and more. But I’m sure we will work well with any American president, as Israel and the United States have common interests and values. This collaboration will continue regardless of the election results.

Q: In June, U.N. Secretary General António Guterres said that any attempt by Israel to implement annexation over the Jordan Valley, and parts of Judea and Samaria, would be a “most serious violation of international law,” and harm peace efforts with the Palestinians. Many other U.N. officials have made similar comments. What is your response to these warnings?

A: I firmly believe, and I stress, that we [Israel] have the rights to the land in Judea and Samaria. This is our biblical right. I took out a Bible and showed it to my colleagues in the Security Council, and said, “This is our deed to the land.” And then I explained to them our historical rights to these areas and our rights under international law.

The decision of the application of sovereignty is one that belongs to the Israeli government. In my role, I would tell my Israeli colleagues to make the right decision [apply sovereignty] and would let them know that we will deal with the diplomatic pushback that will follow such a decision. Again, I challenge anyone to prove me wrong when it comes to our rights to these areas.

Q: Iran remains the greatest threat not only to Israel, but to the world, as it remains the largest state sponsor of terror on the planet. Did you see a willingness or seriousness at the United Nations to confront the mullahs in Tehran?

A: I spent a lot of time on the Iranian issue because wherever you see instability in the region [the Middle East], you can see the fingerprints of the Iranian regime. Whether it’s Hezbollah in Lebanon or their proxies in Syria, Hamas in Gaza, Yemen — you name it. They spend billions of dollars a year promoting terrorism in the region. I’m happy that Israel was not alone and that we worked with other countries on the Iranian issue.

The challenge is in Europe. But we started to see a change. For example, Germany has outlawed Hezbollah, labeling them as a terror organization. We hope to see many more countries push back against Iranian aggression.

In just a few months, the U.N. Security Council will have to decide whether or not it will continue to support the arms embargo against Iran, which is part of the JCPOA [Joint Comprehensive Plan of Action, or 2015 nuclear deal] and is slated to expire this October. The hope is that countries will recognize Iran’s violations and extend the embargo.

Working with Europe is an ongoing process. We share critical information and intelligence with E.U. countries. They can’t ignore the hostilities of the Iranian regime.

Q: While we’re discussing Iran, you noted the warming of relations between Israel and other Arab/Muslim nations in the Middle East over the past few years, especially when it comes to forming a united front against Iran. Describe what it was like seeing those relationships develop firsthand.

A: A few years ago, I visited Dubai, and saw the Arabian (Persian) Gulf and the country of Iran with my own eyes. I had a discussion with a senior official from Dubai, who said to me that the first missile launched by Iran will be aimed at Abu Dhabi [the capital of the United Arab Emirates] and not Jerusalem. I really feel that as a result of Iran’s aggression, Israel is working together and will continue to work together with other countries in the region. Today, we are on a different level of cooperation entirely.

Q: While the situation has certainly improved somewhat when it comes to votes on Israel in various U.N. bodies in New York, after walking the halls of the United Nations every day for the past five years, why is there an obsession with this tiny little country that draws more attention than most other nations combined? Why is Israel held to a different standard than the rest of the world?

A: I found out that at the United Nations, you have hostility towards Israel. There is a double standard, but you can create change. The way I did was by diluting resolutions on the agenda. While it’s very hard to nullify resolutions, you can add items to the resolutions. For example, on a resolution against Israel, I would add a clause calling for the condemnation of Hamas. And then every country has to vote on the resolution, which is now diluted.

In the General Assembly, every year countries vote on the same resolutions over and over again, and when it comes to Israel there are 22 anti-Israel resolutions. It’s almost impossible to erase them, but we succeeded in convincing countries to change their voting patterns while introducing new items in our favor to the agenda. This helped create a better atmosphere for Israel.

At the same time, we hosted many events at the United Nations introducing Israeli technology, culture and innovation. So there was always something positive about Israel [going on].

I also succeeded in bringing more than 100 U.N. ambassadors from all over the world to visit Israel. They not only traveled south and saw the Hamas tunnels, and north to see the Hezbollah tunnels, but I brought them to Judea and Samaria, which helped change their perspective.

When we visited with Mayor of Samaria Yossi Dagan at factories in the Barkan Industrial Zone, and they spoke to Palestinian employees and saw the coexistence there, we explained to them that when you support the BDS movement, you hurt the same Palestinians who work in these companies.

Trying to explain this from New York is almost impossible. They had to come to Barkan and see it for themselves to understand this concept.

Q: What are your career plans now that you’re back home?

A: I grew up in the Betar youth movement and on July 21, we marked 80 years since the passing of Vladimir (Ze’ev) Jabotinsky [the Zionist leader and founder of the youth movement]. Jabotinsky’s main message was “silence is filth,” as in you shouldn’t be silent. For a while, it was difficult for me to stick to diplomatic protocols, but I managed.

Now I plan on using the skills, knowledge and connections that I made over the years to support the country that I love.

Everything is very dynamic in Israel. I will spend my first few days with my family. I haven’t seen my mother for over a year! Then I will turn my attention back to public affairs.