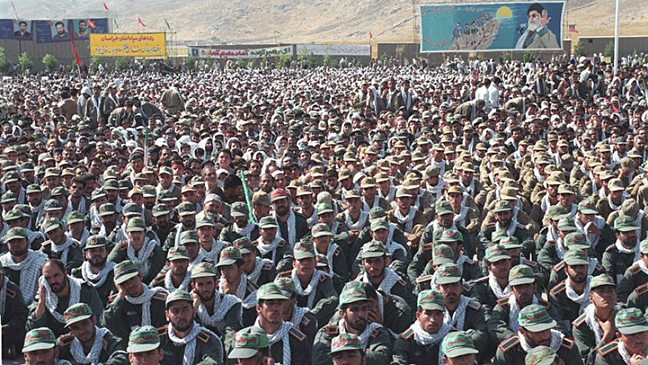 (JNS) — A new report that maps out the ways in which Iran’s overseas elite unit, the Quds Force, operates in Syria under various guises has called on the United States to designate three organizations tied to the notorious unit as terror organizations.

The Quds Force of Iran’s Islamic Revolutionary Guard Corps promotes terrorism and violent subversive activities in order to expand Iran’s influence across the Middle East. It was commanded by Maj. Gen. Qassem Soleimani until Jan. 3, when he was assassinated in a U.S. drone strike in Baghdad, and is now under the command of Esmail Ghaani. The unit funds, trains and arms a host of non-state radical actors, including Hezbollah, Shi’ite militias in Syria and Iraq, and the Houthis in Yemen. It also maintains an extensive weapons trafficking network.

Yossi Mansharof, an Iran and Shi’ite political Islam analyst at the Jerusalem Institute for Strategy and Security and at the Alma Center, authored the report. He told JNS that a gap in publicly available knowledge exists about the various ways in which the Quds Force is active in states outside of Iran.

Mansharof’s report was published at the Alma Research and Education Center, an Israeli organization that conducts in-depth geopolitical research, and which is headed by Lt. Col. (res.) Sarit Zehavi, a former military intelligence officer. Alma is an education and research center dedicated to studying the security challenges on Israel’s northern border.

“It is important that the U.S. administration designates the three organizations analyzed in this study as terror organizations,” stated Mansharof, naming the Iranian Red Crescent, the Imam Khomeini Relief Foundation and the Reconstruction Organization of the Holy Shrines. The stated aim is to constrict Iranian activity in Syria.

In the report, Mansharof noted that “Syria is one of the main destinations Quds Forces are active in today. This is based on the Iranian strategy, which strives to exploit the war in the country and Assad’s dependence on Iranian support (alongside Russia), in order to turn Syria into a front base against Israel, equipped with factories to manufacture advanced weapons, and to maintain and strengthen Hezbollah’s supply route into Lebanon and the access to the Mediterranean Sea.”

‘Use of associations, charities and humanitarian organizations’

Regarding the three associations used by the Quds Forces use to operate throughout Syria, Mansharof wrote in his report that “the Iranian Red Crescent serves as a cover for Quds Forces and the Iranian Intelligence Office (MOIS), making extensive use to advance Iranian subversion in various countries including Lebanon, Bahrain, Yemen and Iraq.”

Based on WikiLeaks documents, Mansharof stated that during the Second Lebanon War in the summer of 2006, the Quds Force used the Iranian Red Crescent as a cover to smuggle military equipment and weapon supplies from Iran to Lebanon.

“In light of the extensive history the association accumulated in the European and Middle East arenas, it is likely that it serves as a cover for Quds Forces missions in Syria as well,” it added.

The Imam Khomeini Relief Foundations has a stated purpose to “eradicate poverty and provide regime support to the disadvantaged. Khamenei directly appoints the chairperson of the foundation,” said the report.

However, the “foundation serves as one of the key channels of the Quds Force worldwide and so for example, according to WikiLeaks documents, was one of the channels throughout Quds Forces delivered weapons to the various pro-Iranian Shi’ite militias in Iraq during the war against U.S.-led coalition forces (2011-2003).”

Yet so far, “it has not been included in the U.S. sanctions list (although the foundation’s Lebanese branch came under U.S. sanctions in 2010 for being an Iranian money-transfer pipeline for Hezbollah institutions). In Syria, the foundation’s activities are linked directly to areas of strategic importance for Iran, which are critical to its Syria expansion plan,” said the report.

Mansharof’s report assessed that it is likely that “the Reconstruction Organization of the Holy Shrines appear to be part of the alleged civilian organizations intended to assist Iran’s establishment efforts in Syria, financing and arming the Shi’ite militias operating there and may even be transferring financial assistance to the [Bashar] Assad regime.”

The foundation’s official role is to renovate and look after holy Shi’ite sites in Syria, such as Zaynab’s tomb in Damascus.

In March 2020, the U.S. Treasury sanctioned the Iraqi branch of the organization after concluding that it is ruled by the IRGC and had “served the Quds Forces in order to send weaponry shipments to Iraq via an Iraqi corporation, the Kosar Company, also controlled by Quds Forces used by them, as well to collect intelligence in Iraq and to transfer funds to Hezbollah. However, the organization’s operations in Syria remain legal.”

Mansharof interviewed senior former officials from the Persian Gulf as part of his doctoral thesis, which analyzed relations between Iran and Shi’ite communities in the Gulf region. In conducting his current research, he fused information from WikiLeaks documents with the Arab and Iranian media. He also scanned Iranian opposition sources.

“When I took this information and connected it with my research from the Iranian media, I saw that I could really complete the puzzle. The Iranian regime does not want this information to be public. Iranian protesters who are calling on the regime to forget about Syria and look after their basic needs want their government to spend billions of dollars on Iranian civilians. Yet we know about the huge sums that Iran sends to Assad. And we know that Iran is in competition with Russia over Syria. So the Iranian regime is very deeply invested in the Syrian story—to the point where it is difficult to believe they would reverse out of Syria,” said Mansharof.

“Iran is making sophisticated and cynical use of associations, charities and humanitarian organizations to export the Islamic revolution,” he added. “It has two objectives: to make strategic regions across Syria as Shi’ite as possible, and to turn Syria into a forward base for Israel, which would provide access for Hezbollah and meet Iran’s aspiration to reach the Mediterranean coast.”