Could a Palestinian Authority collapse bring a better life for Palestinians? 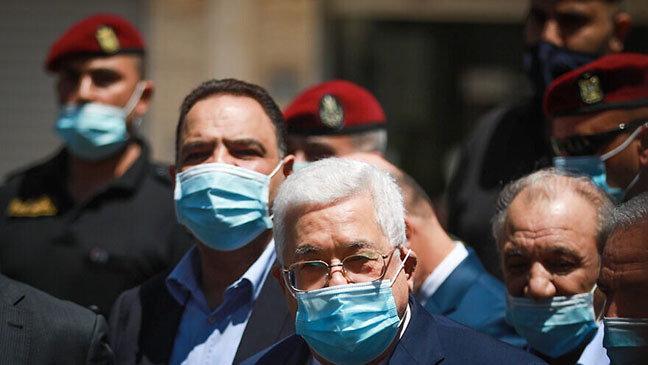 Palestinian president Mahmoud Abbas seen during a tour in the West Bank city of Ramallah, May 15, 2020. Photo by Flash90

Palestinian Authority leader Mahmoud Abbas during a tour in the West Bank city of Ramallah on May 15, 2020. Photo by Flash90.

(JNS) — Despite U.S. President Donald Trump’s release of the “Peace to Prosperity” Mideast plan earlier this year to help resolve issues associated with the decades-long conflict between Israelis and Palestinians, it remains clear that no negotiations between the two parties are on the horizon amid a Palestinian boycott of the Trump administration.

Given this and the ongoing discussion of Israel’s imminent move to apply sovereignty over Judea and Samaria, questions are being raised over the viability of Palestinian Authority, especially as Palestinian leader Mahmoud Abbas, 84, has once again threatened to cut off security cooperation with Israel over the move.

While some in both the Israeli and U.S. governments fear the collapse of the P.A., former senior U.S. officials tell JNS that Israel should promote the end of the entity so that a new generation of leaders can take over.

According to Harold Rhode, a longtime former adviser on Islamic affairs within the U.S. Defense Department’s Office of Net Assessment, the collapse of the P.A. “may present an opportunity for the Palestinians for a brighter future with less oppressive and younger leadership.”

Its breakdown might not change much on the security front, he acknowledged, since Israel is the only power that can maintain law and order in Judea and Samaria. In fact, he added, “the Palestinians themselves prefer Israeli rule.”

The leadership of the Palestinians should be clan- and family-based since this is the way things are decided on the ground, said Rhode. “The P.A.-appointed leaders are outsiders. As the locals say, most of the foreign funds are skimmed off the top by the thugs that rule over them, and the people actually get next to nothing of all this aid.”

The U.N. envoy to the Middle East warned recently that the P.A. is at risk of “total collapse” because of the coronavirus outbreak.

“May salary payments were delayed due to an 80 percent reduction in Palestinian revenues,” Nikolay Mladenov warned the U.N. Security Council. “It is unclear whether the Palestinian government will have sufficient resources to make any future salary payments or, indeed, to continue to carry out its governing functions in the coming months.”

The P.A.’s economy minister, Kahled Al-Osaily, denied that it was on the verge of a financial collapse and that it could borrow from other banks to cover necessary expenses.

At the same time, it appears that the P.A. is cracking down on dissent, with Palestinians who support sovereignty being arrested. For example, it has detained some Palestinians who told Israeli TV journalist Zvi Yehezkeli that they support Israel’s plan to apply sovereignty in parts of Judea and Samaria, Yechezkeli and a relative of one of the detainees told AFP.

Yechezkeli’s conversations revealed a large chasm between what P.A. leaders say and what residents really feel. As he explained, “the understanding that this is an opportunity for a different life extracts from the gut things once heard only behind closed doors, very quietly.”

One Palestinian woman speaking to the reporter by phone estimated that in her village, about 80 percent of people would prefer Israeli citizenship and 20 percent want it but would not say so publicly, according to the report posted on Channel 13 earlier this month.

‘A fossil of a concept’

Established in 1994 as part of the Oslo Accords between the Palestine Liberation Organization  and Israel, the P.A. was originally set up as five-year interim body to govern parts of the West Bank and Gaza Strip.

However, as negotiations between the Israelis and Palestinians faltered and eventually broke due in the late 1990s and early 2000s as a result of growing terrorism and the Second Intifada, it has continued to serve as a quasi-governmental body. Since the Palestinian terror group Hamas took control of the Gaza Strip in 2006, the P.A. has largely been limited to the West Bank under Abbas’s leadership.

David Wurmser, who served as a senior adviser on the Middle East to former U.S. Vice President Dick Cheney and has since founded the Delphi Global Analysis Group, said: “The P.A. is ultimately a fossil of a concept shaped in the 1990s under very different circumstances.”

“One must engage in a fundamental examination of the validity of all the assumptions that led to the concept,” he continued. “The concept was that Israel can more effectively and reliably suppress Palestinian violence if done through a Palestinian organization, and none was seen to be more ‘authentic’ than the PLO.”

While it’s not in the interest of Abbas and his cronies to end the P.A. because of the funds gained from corruption and other luxuries, Rhode noted that Abbas continues to cooperate on security and other matters with Israel because he realizes that it’s in his interest to do so — and it keeps him in power.

Many Palestinians “like the Israeli soldiers at the road blocks, who at least treat them with dignity,” said Rhode, adding that “the P.A. humiliates them and demands bribes.”

Israel at first thought that the PLO — and later, the P.A. — would be able to keep a lid on Palestinian violence for them, but this assumption ended up being erroneous.

“The price Israel was asked and expected to pay for subcontracting the suppression of Palestinian violence was to accede to a key Palestinian demand of statehood, which within limits seemed at the time to be a tolerable price to pay,” said Wurmser.

The P.A. was created as a way station on the road to statehood, ostensibly as a revocable concession if it turned sour, he explained, adding that it was unimaginably the weak Palestinian leadership — boxed in by Jordan and Israel — that would be deterred from acting violently against Israel.

The key assumption was that “the P.A. in its weakness could be used as a vehicle for Israel’s security structures to control the Palestinians because its weakness left it beholden to Israel, and its authenticity was what Israel needed as cover.”

However, this assumption ended up not turning out as planned since the Palestinian leadership wound up abetting terrorism against Israel.

Iran and Turkey will ‘continue to meddle’

Now the P.A.’s weakness has become its leverage, asserted Wurmser, explaining that essentially it has created a hostage situation where it holds a gun to its own head to force Israel, the United States and Europe to give ever more.

In other words, the P.A. leadership used its position as a weak power against Israel, and then received international support and funding to keep it functioning. But in the end, the P.A. cooperated with its domestic rival, Hamas, against Israel.

From the start, the P.A. became the enabler of Hamas, said Wurmser, explaining that “in part, this was direct, and in part, it was as a foil to demand ever more concessions while forcing indulgence of ever more incitement, arming, and ultimately violence.”

At the same time, “the PLO/PA cannot pursue a final resolution to the conflict since its essence and authenticity is anchored to its founding legitimacy.”

Therefore, he said, the P.A. does not want a solution, but is exacting cooperation at a great price, all the while appeasing Hamas and other violent groups.

Meanwhile, both Iran and Turkey are investing in growing support among the Palestinians. Iran has long backed Hamas and Palestinian Islamic Jihad, while Turkey is investing in a new Islamic Center near the Temple Mount.

“Absent an Israeli plan to boost a new local Palestinian leadership, countries such as Iran and Turkey will continue to meddle and emphasize the failure of secular Arab nationalism that is weak and corrupt, and instead promotes its own leadership that serves their purposes,” stated Wurmser.

As such, he concluded, the Jewish state must take the initiative if the P.A. collapses and prevent growing Islamist proxies in the Palestinian areas: In essence, “Israel’s marriage to the P.A. now blocks Israel from making a new strategic initiative to counter the dangerous rise of Iranian- and Turkish-supported groups.”