Kamala Harris seen as “more AIPAC than J-Street” and other V.P. picks could have been worse 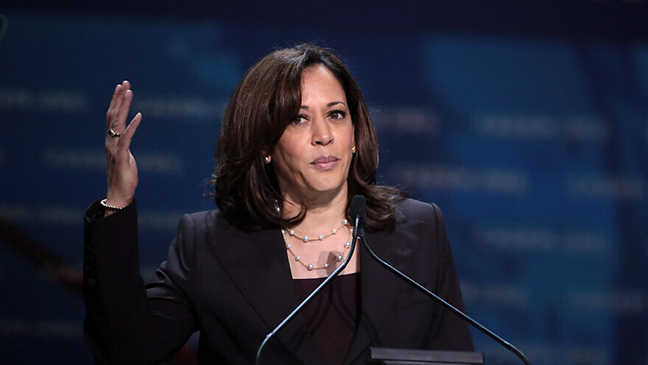 Organizations from the Democratic Majority for Israel to J Street praised the selection of Harris, who would be the first African-American and South Asian to be picked as a running mate for a major-party candidate. She would also be the third woman tapped for the vice-presidential slot, following former Alaska Gov. Sarah Palin in 2008 and Rep. Geraldine Ferraro (D-N.Y.) in 1984.

“Joe Biden and Kamala Harris are the perfect team to restore the soul of this nation, to stop [U.S.] President [Donald] Trump’s hateful agenda, and to strengthen American leadership and the U.S.-Israel relationship,” Democratic Majority for Israel president and CEO Mark Mellman told JNS.

In a statement, Jewish Democratic Council of America executive director and former Harris national security adviser Halie Soifer said, “Harris prioritizes the same issues as Jewish voters and will work diligently to defend our values in the White House alongside our next president, Joe Biden.”

“As the former national security advisor to Sen. Harris, I know firsthand her conviction and commitment to creating a better country for all Americans,” she continued. “She strongly aligns with the values of American Jews, including her support of the U.S.-Israel relationship, her commitment to ensuring access to affordable health care and education, her intolerance for hatred and bigotry, and her unwavering efforts to protect our country’s most vulnerable communities.”

“J Street congratulates Senator Harris and Vice President Biden on this historic selection,” the group told JNS. “Our movement could not be more excited to do everything we can between now and November to help elect this pro-Israel, pro-peace ticket, drive Donald Trump from office and pave the way for a bright new era for our country.”

On the other side of the ideological spectrum, ZOA president Mort Klein told JNS, “I’m concerned that (1) Kamala Harris wants to reinstate the [2015] catastrophic deal with the Islamic Republic of Iran, which allows a path to nuclear weapons; (2) that she refused to condemn [Minnesota Democratic] Rep. [Ilhan] Omar’s anti-Semitism and Israel-hatred while expressing concern for Omar’s safety, not the safety of American Jews; and (3) that she refused to appear at the [2019] AIPAC policy conference.”

However, Sarah Stern, founder and president of the Endowment for Middle East Truth (EMET) said that despite concerns about Harris, the senator is a preferable choice compared to other candidates under consideration for the No. 2 spot, including Sen. Elizabeth Warren (D-Mass.) and former U.S. National Security Advisor Susan Rice, who advocated U.S. President Barack Obama’s 2015 Iran nuclear deal.

The Trump administration withdrew from the deal in 2018, reimposing sanctions lifted under it, along with enacting new penalties on Tehran.

Stern said her organization is “feeling a sense of collective relief. Some of the contenders that were in the running reflected a much more radical position vis-à-vis Israel.”

She went on to say that “Harris has been described as being ‘more AIPAC than J Street.’ I think it is fair to say that she reflects traditional State Department views towards a two-state solution and would like to renegotiate with the Iranians. This was a sensible pick from the democratic contender for the White House. He certainly could have done a great deal worse.”

While running for the Democratic presidential nomination, Harris called for America to re-enter the deal, while Biden has repeatedly said he would re-enter the accord if and when Iran returns to complying with it.

Harris, who dropped out of the presidential race in December, has taken standard Democratic positions related to the Jewish community and the U.S.-Israel relationship, from the 2015 Iran nuclear deal to anti-Israel bias at the United Nations.

Recently, she sent a letter to U.S. President Donald Trump in response to Israel’s expected plans to apply sovereignty to the Jordan Valley, as well as parts of Judea and Samaria, known internationally as the West Bank.

Harris, who represents the second-most populous Jewish state in the United States, voted against the nomination of David Friedman in March 2017 to be U.S. ambassador to Israel.

Just days afterwards, she addressed the annual American Israel Public Affairs Committee Policy Conference, where she talked about growing up in the Bay Area and even collecting donations for the Jewish National Fund.

Harris married Jewish lawyer Douglas Emhoff, 55, in 2014 in a ceremony that included the smashing of the glass to remember the destruction of the First and Second Temples in Jerusalem, in addition to the suffering the Jewish people have endured throughout history.

‘I believe Israel should never be a partisan issue’

At her AIPAC address in 2017, she stressed her support for a two-state solution to the Israeli-Palestinian conflict.

“I believe that the only viable resolution to the Israeli-Palestinian conflict is two states for two people living side by side in peace and security,” she said.

“I believe that a resolution to this conflict cannot be imposed. It must be agreed upon by the parties themselves. Peace can only come through a reconciliation of differences, and that can only happen at the negotiating table. I believe that when any organization delegitimizes Israel, we must stand up and speak out for Israel to be treated equally. That is why the first resolution I co-sponsored as a United States senator was to combat anti-Israel bias at the United Nations and reaffirm that the United States seeks a just, secure and sustainable two-state solution.”

Indeed, Harris was a co-sponsor of a Senate resolution to rebuke U.N. Security Council Resolution 2334.

In April 2017, she signed on to a letter to U.N. Secretary-General António Guterres, calling for the end of the world body’s animosity towards the Jewish state.

At the AIPAC conference, she also said, “I believe Israel should never be a partisan issue, and as long as I’m a United States senator, I will do everything in my power to ensure broad and bipartisan support for Israel’s security and right to self-defense.”

She also addressed anti-Semitism in America, saying “as someone who’s personally prosecuted hate crime, I also believe that we cannot stand by while anti-Semitism, hate crime and bigotry are on the rise, whether that’s a swastika on a Jewish family and children’s services bus in San Francisco or the burning of a mosque in Tampa. That’s why I am pleased to announce for the first time here at AIPAC that I’m introducing a senate resolution that condemns targeting of Jews, as well as any form of religious bias, racism, misogyny or other hateful acts targeting minorities across the United States.”

In the aftermath of the Oct. 27, 2018 shooting at the Tree of Life*Or L’Simcha Synagogue in Pittsburgh, when a lone gunman killed 11 Jewish worshippers during Shabbat-morning services, Harris immediately called for gun control.

“It’s been 12 days since the mass shooting at Tree of Life Synagogue… No one should have to live in fear that their community will be the next one struck by gun violence. This isn’t normal. Congress’ inaction is costing lives,” she tweeted.

Like many Democrats, Harris faulted Trump’s decision to withdraw the United States in May 2018 from the 2015 Iran nuclear deal: “[The] decision to violate the Iran nuclear deal jeopardizes our national security and isolates us from our closest allies. This nuclear deal is not perfect, but it is certainly the best existing tool we have to prevent Iran from developing nuclear weapons and avoid a disastrous military conflict in the Middle East.”

“As the international community and the administration’s own national security team has confirmed multiple times, Iran remains in compliance with the deal. In the absence of an Iranian violation, it is reckless to break this agreement without presenting any plan on how to move forward,” she continued. “Instead of establishing a comprehensive, strategic national security policy, this administration is far too focused on scoring political points.”

Harris has pledged to return the United States to the Iran nuclear deal.

Republican Jewish Coalition executive director Matt Brooks denounced the selection, saying that the former vice president “has sealed the Democrat Party’s move to the extreme left with the choice of Kamala Harris as his running mate.”

“Senator Harris wants to put the U.S. back into the disastrous Obama-Biden nuclear deal with Iran. She does not stand with Israel and the Jewish community. She voted against an anti-BDS bill in the Senate that also extended an existing loan guarantee program with Israel,” he said. “As Attorney General of California, she received numerous letters from Jewish organizations urging her to act against anti-Semitic activities on campuses in the California public university system, but she refused to answer those pleas.”

The American Israel Public Affairs Committee and the Jewish Federations of North America declined to comment.