The Historic Significance of the UAE-Israel Deal 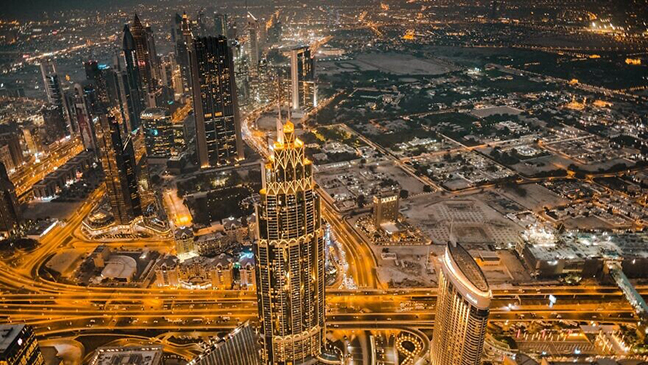 A view of Dubai at night. Credit: enjoytheworld/Pixabay.

(Church4Israel) — The Israel-United Arab Emirates Peace Accord is a Game Changer for Peace in the Middle East. This is full diplomatic relations with an important Arab nation, the most significant advancement for peace in the Middle East since the 1994 peace deal with Jordan. This is Iran’s worst nightmare. And it is part of the Trump Peace Plan.

Israeli Prime Minister Benjamin Netanyahu said “Today we usher in a new era of peace with the Arab world. I just came from a historic virtual conference between myself, President Donald Trump, and Crown Prince Mohammed bin Zayed of the United Arab Emirates. We announced the establishment of a full and formal peace between Israel and the UAE. It includes the mutual opening of Embassies, direct flights, and many, many other bilateral agreement… This is the greatest advancement towards peace between Israel and the Arab world in the last 26 years.”  –

Mike Evans, an evangelical leader close with President Trump who has been involved in meetings with the Arab leaders, said in an interview on August 13 with I24 Israel news; “This is part of the Trump Peace Plan designed by Jared Kushner that has been in the works for over two years… And Netanyahu has been working on this for over 10 years.” He also stated, “The Crown Prince of Saudi Arabia is in agreement with the UAE and we will be shocked at how many Arab nations follow and normalize diplomatic relations with Israel.”

Netanyahu has been meeting with Sudan, Saudi Arabia, and other significant Middle Eastern Muslim nations. These Arab nations are Sunni and all are threatened by Iran. They also are wise enough to see the technological, medical, environmental partnership advantages of a relationship with Israel.

It is also important to note that August 13 is the 15th Anniversary of uprooting the Jewish residents of Gaza and turning the area over to the Palestinians. This was known as the “Disengagement Plan” and was supposed to be a “Land for Peace” deal with Palestinians. Twenty-two Jewish settlements in Gaza were evacuated, removing every Jewish family. As we know, the newly Palestinian occupied and ruled Gaza elected a terror group, Hamas, as their leadership and terror attacks have been constant since.

Over 80 terror balloons with small bombs attached were launched into Israel in the 48 hours before this historic announcement, lighting Israeli farms ablaze. Israel’s defense forces did retaliate. The terror attacks from Gaza by Iranian-backed Hamas and Islamic Jihad are daily and have burned thousands of acres of Israeli farmland in recent years, endangering communities.

The United Arab Emirates is the financial powerhouse of the Middle East. The capital of the UAE is Abu Dhabi and the largest city, Dubai, is a global financial capital.

The United Arab Emirates is a group of seven emirates in the area, consisting of Abu Dhabi (which serves as the capital), Ajman, Dubai, Fujairah, Ras Al Khaimah, Sharjah, and Umm Al Quwain. Abu Dhabi accounts for 6 percent of the world’s oil reserves. They have a significant space program and have a Mars mission well underway. The population is over 9 million and controls a significant portion of the wealth of the Arab world.

The UAE is recognized as a regional and world power. It is a member of the United Nations, the Arab League, the Organization of Islamic Cooperation, OPEC, the Non-Aligned Movement and the Gulf Cooperation Council.

The Most Powerful Leader in the Arab World

Crown Prince Sheik Mohammed bin Zayed, 58, worked with President Trump, who brokered the deal between Israel and the UAE. Prince Mohammed is the crown prince of Abu Dhabi and ruler of the United Arab Emirates. The New York Times recently called Prince Muhammed “arguably the most powerful leader in the Arab world.”

UAE has been an important military partner with the United States since 1994. UAE has a significant air force and military. Their special forces are active in Yemen, Libya, Somalia and Egypt’s North Sinai and are also very influential in Saudi Arabia.

The United Arab Emirates began allowing American forces to operate from bases inside the country during the Persian Gulf war of 1991. They have assisted American forces in Kosovo, Somalia, Afghanistan and Libya, and against the Islamic State. As a military partner, UAE has acquired from the U.S.  80 F-16 fighters, 30 Apache combat helicopters. They also get upgrades for their F-15s from Israel and share other technology.

Iran and the Muslim Brotherhood are the Prince’s declared enemies, another reason for the importance of this peace accord. But the shared enemy of Iran was not the primary reason for solidified diplomatic relations. Shared technology, science and economic interests were the primary factor. Sudan and Oman are expected to soon follow in normalizing ties with Israel.

This alignment with the military power of the UAE should also completely change the dynamic of the threat by Hezbollah on Israel’s northern border as well as the power the Palestinians think they have.  Tensions have been high as Iran, via Syria, has built up over 250,000 missiles on Israel’s northern border and armed terrorists in Gaza and in the West Bank (Judea and Samaria). This alignment with a Middle East military powerhouse in UAE will be a substantial advantage to Israel facing Hezbollah’s threat and Iranian threats in Syria.

“for his critical help in brokering this historic accord. I want to thank him for his revolutionary vision for peace, which is the most realistic and important formula for peace in the region. President Trump’s Middle East plan served as a basis for this historic peace announcement.

“Israel and the UAE are two of the most advanced countries in the world. Together we will transform the region and forge an even better future for our people. A future of peace, a future of security, and a future of prosperity. I have always believed we could find peace with the Arab world and I have been working towards that lofty goal for decades.”

In recent years Israel has made advances with Sudan, Oman, Bahrain and other nations. Netanyahu said he is confident that after this announcement, many more Arab nations will follow and join the region’s “circle of peace.”

Christians and Jews free in UAE

Unlike Saudi Arabia and other strictly Islamic nations, the United Arab Emirates under Prince Muhammed’s leadership allows Christian churches and Hindu or Sikh temples, has an accepted Jewish community, and a third of the cabinet ministers are women.

Christians account for 13 percent of the total population of the United Arab Emirates, according to census data. The government recognizes various Christian denominations and Christians are free to worship. In September 2019, the UAE made a historic declaration by announcing a new UAE landmark, which will feature a church, mosque and synagogue built in the same location in Abu Dhabi.

A new Jewish community was formed in November 2019. “The fact that there is for the first time in centuries a new Jewish community established in the heart of the Arab World is nothing short of historic.” – Newly announced Chief Rabbi of the Jewish Community of the Emirates.

The Palestinians Are Shocked – “CheckMate”

Previously, the peace deals with Arab Countries were in 1979 with Egypt, 1994 with Jordan, and today with the United Arab Emirates. Netanyahu also said strongly that while there will be a pause in applying sovereignty to the Jewish settlements in the West Bank (Judea and Samaria) there is no change in the plan. Sovereignty in Judea and Samaria will still happen after a short time.

However, Sheikh Mohammed Bin Zayed tweeted “During a call with President Trump and Prime Minister Netanyahu, an agreement was reached to stop further Israeli Annexation of the Palestinian territories.” Earlier in the day Netanyahu said he has not stopped his plan to issue sovereignty over the settlements in Judea and Samaria. Netanyahu insisted multiple times it was only a pause, sovereignty will still happen. Time will tell as details emerge.

This is a shock to the Palestinian Authority and leadership in Gaza. According to live reports from reporters inside the West Bank and Gaza, they were caught off-guard by this. It is certainly a significant signal that they are losing support from the Arab world and are going to have to operate from a new paradigm. Gaza’s leadership made a statement calling it a “stab in the back.”

A formal statement was released outlying the Peace agreement

“Delegations from Israel and the United Arab Emirates will meet in the coming weeks to sign bilateral agreements regarding investment, tourism, direct flights, security, telecommunications, technology, energy, healthcare, culture, the environment, the establishment of reciprocal embassies, and other areas of mutual benefit. Opening direct ties between two of the Middle East’s most dynamic societies and advanced economies will transform the region by spurring economic growth, enhancing technological innovation, and forging closer people-to-people relations.

“As a result of this diplomatic breakthrough and at the request of President Trump with the support of the United Arab Emirates, Israel will suspend declaring sovereignty over areas outlined in the President’s Vision for Peace and focus its efforts now on expanding ties with other countries in the Arab and Muslim world. The United States, Israel, and the United Arab Emirates are confident that additional diplomatic breakthroughs with other nations are possible, and will work together to achieve this goal.

“The United Arab Emirates and Israel will immediately expand and accelerate cooperation regarding the treatment of and the development of a vaccine for the coronavirus. Working together, these efforts will help save Muslim, Jewish, and Christian lives throughout the region.

Robin Rowan is a recipient of the Secretary of Defense Medal for the Global War on Terrorism. After many years in government oversight for U.S. Inspectors Generals, Rowan conducts extensive research and mandates truth over politics. She is a political activist for the U.S.- Israel relationship, serving as lay lobbing leader and six years on the National Council of the American Israel Public Affairs Committee (Views expressed do not reflect views of AIPAC). An ordained minister, she speaks to churches of all denominations on Israel and the importance of the Christian advocacy and engagement in politics. Webinars and a weekly podcast are in development.