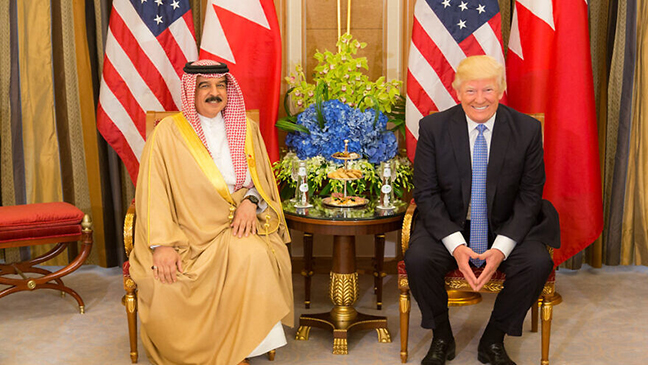 (JNS) — Jewish and pro-Israel groups instantly applauded Israel and Bahrain for agreeing on Sept. 11 to normalize relations between the two countries — the second of its kind between Israel and a Persian Gulf nation in the wake of the United Arab Emirates.

It’s also the fourth peace accord between Israel and a Middle Eastern country, following Egypt in 1979, Jordan in 1994 and the UAE, which agreed to such a deal on Aug. 13 and is scheduled to formalize it in a White House ceremony on Sept. 15.

Bahrain will also be part of the ceremony, where Israeli Prime Minister Benjamin Netanyahu and Bahraini Foreign Minister Abdullatif Al Zayani will sign a declaration of peace, according to a joint statement released by the United States, Bahrain and Israel.

U.S. President Donald Trump, who tweeted that the agreement is “Another HISTORIC breakthrough,” spoke on Sept. 11 with Bahraini King Hamad bin Isa bin Salman Al Khalifa and Netanyahu, who called the agreement “a pivot of history, a pivot toward peace.”

Between Israel and Bahrain, they will exchange ambassadors, have direct flights and launch economic initiatives, said Trump in the Oval Office shortly after announcing the deal.

It is currently unknown where the Bahraini embassy in Israel will be located. Most countries have embassies in Tel Aviv. The United States and Guatemala are the only ones to have theirs in Jerusalem, both having relocated there in May 2018. The Emirati one will be in Tel Aviv.

The full details of the Israel-Bahrain deal have yet to be announced.

The American Israel Public Affairs Committee called the development “another historic demonstration of a new promising era in Israeli-Arab relations.”

“These diplomatic achievements are a testament to the fact that a strong and secure Israel, backed by the United States, is critical to bringing reconciliation to the region,” said AIPAC in a statement. “The old and unproductive paradigm of boycotts and rejectionism is collapsing, and a new model of peace, prosperity and cooperation is emerging.”

“Now is the time for other countries in the region and the Palestinian leadership to embrace this model, and cement new ties and forge lasting peace and security in the Middle East,” continued AIPAC.

“Historically, sustainable Arab-Israel peace agreements have been achieved with active United States leadership. The back-to-back agreements between Israel and the United Arab Emirates, and now Bahrain, were achieved with the full engagement of the U.S. administration,” said American Jewish Committee CEO David Harris. “We thank President Trump and his team who saw these possibilities, and welcome the winds of change in the Middle East that lay the foundation for greater peace, cooperation and prosperity.”

Jewish Council for Public Affairs president and CEO David Bernstein told JNS that his organization “could not be more pleased that Bahrain and Israel are normalizing relations. This is a very auspicious moment for Israel and the prospects for peace in the Middle East.”

Jewish groups from both sides of the political aisle applauded the development.

“Bahrain’s decision to normalize relations with Israel demonstrates the growing conviction in the region that now is the time to set aside old conflicts, stand united against the threat of Iran, and engage in economic, technological, scientific and cultural cooperation with Israel that will improve the lives of all the peoples of the Middle East,” said Republican Jewish Coalition national chairman former Sen. Norm Coleman (R-Minn.) in a statement.

Democratic Majority for Israel president and CEO Mark Mellman told JNS, “From Bahrain and the UAE to Chad and Malawi, countries once at best skeptical of Israel are turning into friends. We salute the wisdom of all these countries in recognizing both the mutual benefits of strong ties with Israel, and Israel’s right to exist as a Jewish state in peace and security.”

“Bahrain’s decision to normalize relations with Israel is yet another positive indicator that change in the region is moving in a welcome, positive direction,” B’nai B’rith CEO Daniel Mariaschin told JNS. “The UAE, and now Bahrain, are sending a strong and unmistakable message that peace and stability in the region are indeed reachable.”

Sarah Stern, founder and president of Endowment for Middle East Truth (EMET), called Friday’s development “yet another indication of the blossoming of warm relations between Israel and the Sunni Gulf states that had been up until now ‘under the table.’ ”

The new development “shows that these Arab partners understand and appreciate that the Jewish state is not going anywhere, that Israel is here to stay; that they have a tremendous amount that they can share and learn from  Israel, in terms of high tech, cybersecurity, water irrigation and agriculture, and in the age of COVID-19, medicine,” she said.

At least since 2019, Bahrain has been improving its diplomatic relations with Israel. In June of that year, it hosted the “Peace to Prosperity” conference, where the United States released the economic component of its Israeli-Palestinian peace proposal. The following August, Bahrain joined the U.S.-led coalition against to protect shipping in the Gulf against Iran.

Along with Saudi Arabia, Bahrain opened its airspace last week to allow flights between Israel and the UAE.

This week, Saudi Arabia and Bahrain agreed to open their airspace to flights east from Israel.

‘A sea change of attitudes’

Zionist Organization of America president Mort Klein told JNS that the Bahrain-Israel normalization deal is a loss for two of Israel’s enemies — Palestinian leadership and the BDS movement — and that U.S. President Donald Trump “deserves the Nobel Peace Prize,” for which the president was formally nominated this week, for brokering the Israel-UAE peace deal.

“The more Islamic countries that make peace with Israel, the less impact the Palestinian terrorist dictatorship’s anti-Semitic propaganda lies and the BDS movement against Israel will impact,” he said.

American Jewish Congress president Jack Rosen told JNS, “We are witnessing a sea change of attitudes: the Israel-UAE agreement, the decision of Saudi Arabia and Bahrain to allow Israeli flights to use their airspace, the refusal of the Arab League to condemn the Israel-UAE accord.”

“Muslims and Jews, as in centuries past, will once again be able to channel their considerable talents and resources into projects that will benefit all of humanity,” he said. “For the Greater Sephardic community, these developments are at once historic and personal in ways that may be difficult for others to understand. With shared roots in the region and [those] who have in recent memory experienced the trauma of exile, it is deeply moving to see one Arab country after another welcome them, in freedom and friendship, to be fully Jewish.”

“Acceptance of Israel and its integration into the Middle East is a positive development for regional stability, for American interests, and no less importantly, for Israelis not being unfairly ostracized by other states,” said Israel Policy Forum in a statement. “We hope that Bahrain’s addition to the list of Arab states that have open and official relations with Israel paves the way for more such developments in the months and years ahead.”

At last, “the walls of isolation around Israel are crumbling,” Malcolm Hoenlein of the Conference of Presidents of Major American Jewish Organizations told JNS.

Even J Street, which is usually highly critical of Israel, welcomed the deal.

“As with the UAE agreement, this is a positive development. Here is some context on the long history of Bahrain-Israel relations, from [Israeli Prime Minister Yitzchak] Rabin under Oslo [in the 1990s] to today,” tweeted J Street. “And while normalization is welcome, real *peace* requires an agreement that resolves the issues at the core of the Israeli-Palestinian conflict and leads to the establishment of a viable and independent Palestinian state alongside Israel.”