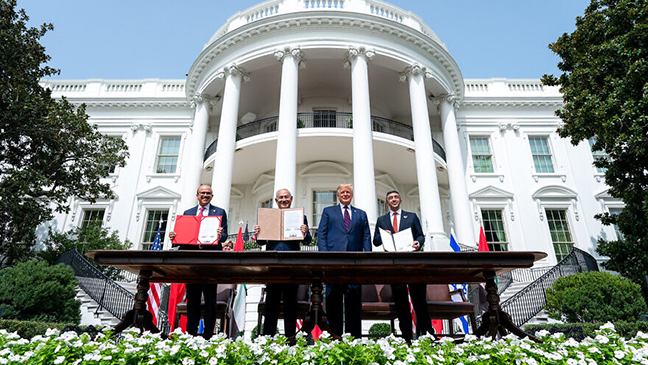 (JNS) — It’s hard not to get emotional about the deals signed in Washington this week between Israel and its new Gulf partners, the United Arab Emirates and Bahrain.

It’s not just that this historic agreement has smashed once and for all the false notion that peace between Israel and the Arabs could only be achieved through the establishment of a Palestinian state — a belief that actually helped create permanent war.

It’s not just the giddying signs that other Arab states may now follow suit and thus transform the prospects of a durable peace between Israel and its Arab neighbors. Even Saudi Arabia, the epicenter of the Sunni Muslim world and without whose approval the agreement would never have happened, may also openly “normalize” its relationship with Israel.

The Palestinian cause, supposedly the sticking point for the Arab rejection of Israel, is now receiving merely lip-service from Arab moderates, if that. Saudi writers are being allowed to write openly against the Palestinians. Hitherto suppressed truths are now being told in the Arab world in a way that was previously unthinkable.

Arab writers are saying they were wrong to believe that Israel was the aggressor in the region since it’s clearly Iran and Turkey that are guilty of aggressive expansionism. These writers are saying that peace and co-operation with Israel will bring them great benefits in terms of modernity and development.

A Bahraini activist wrote: “There is growing awareness among many in the Arab world that the Jewish people are not foreign colonialists in the Land of Israel, they are part of this land, and part of our region…”

All this is astonishing and wonderful in itself. But there’s an even greater significance, so profound it seems scarcely possible, in the very name bestowed upon this agreement: the Abraham Accords.

For this isn’t just a glib choice of name nodding to the fact that Jews and Muslims, along with Christians, acknowledge their descent from Abraham. This is something usually noted as a curiosity of no particular significance.

It’s actually of the greatest significance. For Muslims and Jews are family. They are often referred to as “cousins,” but this not correct.

Muslims are in fact the Jewish people’s step-family. According to Jewish tradition, they are descended from Ishmael, the son of Hagar, Abraham’s Egyptian concubine.

Step-family relationships are often extremely fraught, but this one was particularly traumatic.

The Hebrew Bible recounts that, under pressure from his wife Sarah, Abraham sent Hagar and Ishmael away into the desert. Contrary to expectations, they did not die. The Bible states that they were saved by the Almighty, who declared that Ishmael would father a great nation.

In due course, Mohammed, the founder of Islam who was originally drawn to Judaism and borrowed many of its traditions, turned violently against the Jews when they refused to accept him as their prophet.

So these accords aren’t just about peace between warring peoples. They have the potential to heal a deeply fractured family.

It’s often said that the worst aggression and bitterness arise between those who are very close. When family members fight each other, the hostility is often paradoxically sharpened by the frustration of an intense longing to repair the rift.

And so that helps explains the joy and excitement with which many Gulf Arabs themselves have been greeting this rapprochement with the Jews of Israel.

It’s why there’s such a huge difference between the Abraham Accords and the peace treaties made years ago with Jordan and Egypt. The latter were strategic alliances between governments. They didn’t stop Jordanian and Egyptian societies continuing to spew out anti-Jewish venom.

By contrast, Abraham Accords represent a cultural rapprochement between the Israelis and the Emiratis and Bahrainis. That’s why a textbook containing praise for the agreement with Israel is already to be found on the desks of Emirati schoolchildren.

Teaching children respect for others rather than hatred is proof of a genuine desire for peaceful co-existence. Which is why the Palestinian textbooks teaching children to hate Israel, and which even erase it from the map of the region altogether, are the surest proof that the Palestinians have chosen the path of permanent war.

Of course, the enemies of Israel in the West are spitting tacks over the Abraham Accords. For they were brokered by U.S. President Donald Trump and Israeli Prime Minister Benjamin Netanyahu, who to these Western eyes are the two bogeymen of the apocalypse.

The Democratic Speaker of the House, Nancy Pelosi, managed to say she hoped the accords would be “beneficial for the region.” But then she promptly complained that the Trump plan for a two-state solution “still hasn’t come in any way that has brought peace,” and dismissed the signs of a true Arab-Israel peace in the Abraham Accords by suggesting that Trump was using them as a “distraction” from the coronavirus pandemic.

For Western leftists, the sight of Trump and Netanyahu triumphantly celebrating this deal, which has led to their nomination for the Nobel peace prize when both leaders are facing near-hysterical attempts to oust them at home, threatens to drive these foes wild. The idea that these hate-figures may have brought about a peace that has eluded the world for a century is too intolerable to be even seriously considered.

Of course, with a conflict as long and intractable as the Arab war against Israel, cautious skepticism over any apparent breakthrough is only prudent. And the strategic necessity of this Arab-Israel alliance against Iran is obvious.

But it was the immensely touching visual images that told a deeper story. A photograph was posted on Twitter showing Jared Kushner, the president’s senior adviser, handing a Torah scroll to King Hamad bin Isa bin Salman al-Khalifa of Bahrain to be used in a synagogue in the kingdom. Both men were looking reverentially at the scroll.

Scarcely less moving was the poignant image of the line of white-robed Emiratis all waving to the El Al jet departing with the Israeli and American delegation on the first direct return passenger flight between Tel Aviv and Abu Dhabi.

This is now a chance for the Arab and Muslim world to start showing the West that it can live alongside and with respect for other peoples. It’s a chance for it to fundamentally recalibrate its dire association with violence and death. And it’s also an opportunity for the Jewish people to reach out to the Muslim world and show that what it welcomes is a bond far greater than economic ties or strategic defense.

It’s the bond of family.

Nor does the potential for good stop at Israel. Hatred of the Jews lies at the very core of the Islamist war against the West. Islamist ideologues have argued for almost a century that modernity threatens Islam and the Jews are behind modernity.

If the moderate Arab world now finally understands that Israel is not its enemy but its ally, this could begin to undermine the foundations of irrational and self-defeating hatred that has fueled the Islamist war against the West.

While intractable Islamic fanaticism will not just disappear, the Abraham Accords might give Arab and Muslim reformers wind in their sails to bring their culture into an accommodation with the rest of the world.

And Britain, Western Europe and the American left will be the last people on earth to realize this.

Melanie Phillips, a British journalist, broadcaster and author, writes a weekly column for JNS. Currently a columnist for “The Times of London,” her personal and political memoir, “Guardian Angel,” has been published by Bombardier, which also published her first novel, “The Legacy,” in 2018. Go to melaniephillips.substack.com to access her work.