If Anything Sustains the Arab-Israeli Conflict, It Will Be Progressives’ Antisemitism 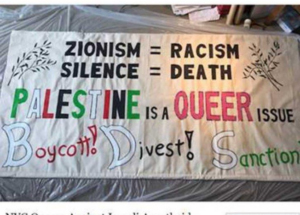 EXECUTIVE SUMMARY: The Arab World is increasingly losing interest in the Arab-Israeli conflict. If that conflict is to be sustained, it will be almost entirely through the efforts of the Progressive movement. Members of that cult will not let the conflict disappear, as to do so would undermine one of their articles of faith. Progressivism is a return to old-school antisemitism.

The Arab-Israeli conflict, as we have come to know it for more than half a century, is slowly being relegated to the annals of history. After decades of war and intense political struggles that subsumed Arab politics, the exhausted Arab world has stopped caring.

The dire predictions foretold by myriad apocalyptic pieces in The New York Times and the Washington Post regarding President Trump’s recent initiatives in the Middle East reflect the attitudes of their authors more than the attitudes of the region. The moving of the United States embassy to Jerusalem, recognition of Israel’s sovereignty over the Golan Heights, publishing of new peace parameters, and finally the peace agreements between Israel and the United Arab Emirates and Bahrain did not spark outrage across the Arab World — on the contrary; the responses ranged from indifference to excitement. The “third intifada” those Western authors expected has materialized, but not in the Middle East: it has occurred on the streets of American cities.

Yet when one listens to the leaders of the Progressive movement and its Congressional representatives, one gets the impression that the Arab-Israeli conflict remains the most pressing issue in world affairs and the greatest impediment to world peace. This premise — that the Jews and their state are at the root of all the world’s troubles — is fundamentally antisemitic.

The antisemitism of the Church is perhaps the oldest, most persistent, and most familiar form of hatred of the Jews. The reasons behind it are clearly articulated: the Jews declined to accept Jesus’s message, then killed him and refused to repent. The elders of the Church believed that their new religion, a mix of the Judean and the Hellinistic, needed an enemy, and the Jews fit the bill. By making alleged Jewish transgression a part of the canon, the Church put the Jews in the position of being perpetual scapegoats.

In an ironic twist, the Church made itself dependent on the Jews’ continued existence as a target of opposition. Even during the harshest periods of the Church’s persecutions, such as the Spanish Inquisition, the Jews had the chance to leave their country and practice their religion elsewhere. Nazism, with its goal of total physical annihilation of all Jews, was not, contrary to common belief, a culmination of Church policy. (It was a product of the Enlightenment and the final chapter in a process that started with the creation of the Ghetto in Venice.)

Marxism echoed the Church in labeling the Jews the eternal enemy. Once again, the Jews refused either to accept the new dogma or repent their choice. Hence, they were declared a people with no claim to nationhood. They assumed the role of the Devil, with all their actions perceived as negative.

They went essentially unchallenged until the final victory of Communism, a “second coming” of ideological Marxism. The Bolsheviks took this idea to the extreme (as applied Marxists tend to do). They created an irrational and self-destructive situation: they would try to “convert” the Jews and at the same time forbid them from leaving. That approach assured a guaranteed eternal enemy but exposed the Soviet Union to world criticism, even from friends abroad. By pursuing that policy the Soviets gained nothing but lost a great deal. Vladimir Putin has himself admitted on a few occasions that the Soviet Union’s state antisemitism was one of the most devastating and inexcusable mistakes of the Soviet leadership.

While progressives are the ideological grandchildren (to the extent that they possess an ideology) of Marxists, they are members of a cult, the ideological fault lines of which pass not through class but through race and ethnicity. Progressivism borrows a bit from Marxism, but its main weapons are passion and faith, not logic and reason. At its core it is closer to the early Church than to Marx or Lenin.

The belief system of the progressives contains a number of “original sins,” one of which is the establishment of the State of Israel. The Palestinians are viewed as analogous to Jesus: innocents who were sacrificed by the Zionists (or the Jews, if the speaker is not careful enough) on the altar of global white imperialism. Thus every Jew must condemn Israel and Zionism to rid himself of the association.

Given that there will always be Jews who are unwilling to abandon the main tenet of Jewish national identity, the Progressive movement is guaranteed a perpetual enemy. As the movement “matures,” Israel/Zionists/Jews take on more and more diabolical roles unrelated to the Middle East. The Zionists are accused of running the world, its finances in particular, and are presented as the vanguard of white imperialism.

If there is anything the Progressives have thoroughly borrowed from the Soviets, it is intense antisemitism presenting itself as anti-Zionism. The Progressive platform on Jews and Zionism sounds familiar to anyone who read Pravda in the 1970s and 1980s. Intersectionality, the pillar of the Progressive worldview, mandates that enemies be found everywhere, in the most bizarre incarnations.

If the Arab-Israeli conflict is to continue to exist, it will be thanks to the antisemitism of the Progressive movement. Members of that cult will never let the conflict disappear, as to do so would undermine one of their articles of faith.

Lev Stesin is a computer scientist. Reprinted from the Begin-Sadat Center for Strategic Studies. BESA Center Perspectives Paper No. 1,784, October 23, 2020