Praying Around the Potholes on the Road to Middle East Peace 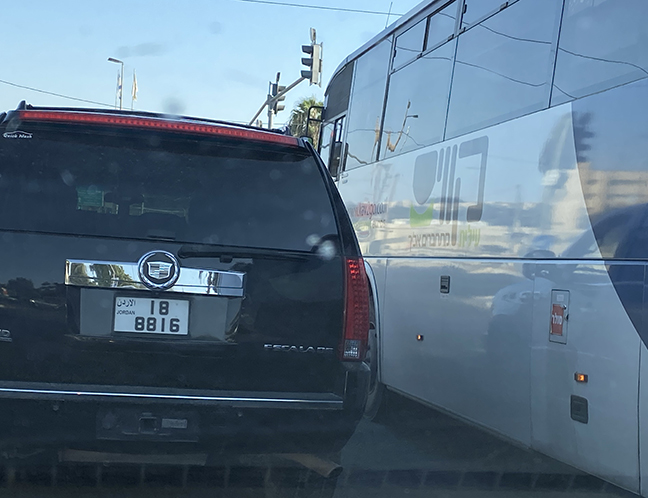 A Jordanian car next to an Israeli bus in Jerusalem

Despite decades of working and interacting with Christians whose love and support for Israel is strong and unconditional, I am still not used to it when people reach out to ask how we are, and how they can pray for and support Israel. I, like most Jews, I believe, am programmed over thousands of years of isolation and heinous crimes committed against us not to look beyond ourselves for help. I know that’s no longer the reality, but it still takes time to sink in, even for someone like me.

This week I have been bombarded by Christian friends all over the world asking how Israel will fare under a Biden presidency. Love him or hate him, many recognize that President Trump has done many good things for Israel. There’s a concern, at best, that these won’t be sustained. But there are frightening worst case scenarios as well.

It’s no secret that the majority of Israelis felt that Trump was good for Israel overall, overlooking personal behaviors and even contradictory policy issues. There’s been a feeling which perhaps Israelis never had before, that potholes and bumps on the road have been fixed, and that it will be relative smooth sailing, or driving, going forward. There’s a concern that under President Biden, things will slip backward, or worse. Friends have asked me what to look out for, and what to pray for.

With recent developments, there’s a clear alliance between a growing number of Arab states and Israel due to the divisive, destabilizing and threatening influence of Iran and Turkey throughout the region. Seeing Jordanian cars in Jerusalem is a common enough occurrence. Now there’s speculation that we might see cars coming soon from UAE, Dubai, Saudi Arabia and other Gulf states. That breeds cause for hope. But there’s a lot of reason for concern.

As Biden puts together his team, things will become clearer. Will he (and the people he puts around him) recognize and distance themselves from the failures of Obama, and even Trump, vis a vis Iran and Turkey. Obama’s was promoting an unprecedented emboldening of Iran with a disastrous deal, providing an outrageous amount of cash to prop up their failing economy, much of which went to fund their terror industry. A return to any deal with Iran that paves the path for them to foster terror or get a nuclear weapon, ever, will be a failure and a threat not just to Israel, but to the region and the world.

Turkey has also been handled inappropriately, and needs to be dealt with seriously. Obama sowed the soil and turned a blind eye to (or willfully accepted) their nefarious agenda of spreading and emboldening radical Islam. He turned Turkey into an ally. Trump continued this mistake, relying on Turkey as a partner with common interests. This changed when Turkey brokered a weapons deal with Russia, dashing hopes that they could be a reliable partner and NATO member while arming itself with weapons from, and becoming closer to, Russia. Fortunately, this scuttled the deal to send Turkey advanced F-35 planes. But they remain a deep regional threat and cannot be dealt with kid gloves.

If the U.S. returns to strengthening Iran, that won’t end well. Only three presidents have not been reelected to office in the past 40 years, including Jimmy Carter, who had a national malaise and weak economy, but also lost in part because of the Iranians. Let’s pray Biden doesn’t make the same mistake.

If the U.S. returns to emboldening and enabling the Palestinian Authority to continue as rejectors of peace and instigators of violence, resorting to the reflexive two-state formula that failed in the past, this will only serve to push prospects for peace further away. It will also risk other Arab states not following through on the recent Trump successes of bringing Arab states to make peace with Israel on their own. Biden needs to keep up with the paradigm change, not restore the broken paradigm.

There’s concern that Biden will undo some of the Trump policies vis a vis Jerusalem, the Golan Heights, or the rejection of the notion that “settlements” are by definition illegal and an obstacle to peace. The foundation of peace needs to be built on reality, not on myths and failed formulas. Biden could continue the out-of-the-box direction that Trump initiated and which has borne fruit, or he could reset things to be as bad, or worse, than they have been on these and other fronts.

Much of this depends upon what degree the far-left wing of the Democratic Party has influence, and that’s dependent on who Biden places around him now. If by being Obama’s vice president, he and his advisors instinctively go back to the failed policies, there’s not a lot of reason for hope, much less good results. If he and his advisors are prepared to recognize past failures, and turn the page on policies that were disastrous, not to mention ineffective, maybe some good can come.

On a tangential but related note, Biden needs to draw a red line and have zero tolerance for antisemitism, and especially to purge it and its purveyors within the Democratic Party’s own ranks. This came to light particularly in 2019 when Speaker Nancy Pelosi unilaterally absolved Congresswoman Ilhan Omar of antisemitism after remarks that sparked outrage even among Democrats. The House resolution’s moral equivalence of Omar’s antisemitism with all forms of hatred remains a bone in the throat of many. Biden would do well to follow the model of the British Labour Party which purged antisemitic leader Jeremy Corbyn, rather than appeasing the antisemites and giving them any home in the Democratic Party.

Israel needs and covets your prayers for these and other areas that not only do not lead to the path of peace, but make that prospect a distant speck in the rear-view mirror while navigating dangerous potholes. And so does the United States.